Fujieda MYFC (藤枝MYFC, Fujieda Maiefushī) are a Japanese J3 League football club based in Fujieda, Shizuoka. It is funded by online subscribers and is the first of its kind in Japan.

The club spent two seasons in the Japan Football League before having their application accepted in 2013 to participate in the inaugural season of J3 League in 2014. [1]

The current club was formed in 2010 as a merger of two clubs, Fujieda Nelson (named after Daishiro Yoshimura's Brazilian middle name) and Shizuoka FC. The My Football Club project bought Fujieda Nelson CF in 2008 and renamed them Fujieda MYFC. [2] Then in 2010, My Football Club bought Shizuoka FC and merged the two clubs to form Shizuoka Fujieda MYFC. Toshihide Saito was appointed player/manager of the club.

In their first season the club finished 1st in the Tokai League Division 1 but was knocked out of the Regional League promotion series.

On 2011, they took second place in the Regional League promotion series and therefore won promotion to the Japan Football League [3] for the first time, becoming the third representative of the prefecture in the national leagues. They then dropped the Shizuoka from their name and become just Fujieda MYFC. [2]

In 2012, the club finished their first season in the Japan Football League in 11th place and therefore secured their place in the division for the following 2013 season.

After finishing 13th in the Japan Football League in 2013, the club were accepted in the inaugural J. League Division 3 which competed in 2014. [1] Following the club's acceptance, player/manager Toshihide Saito decided to leave the club. [4]

Fujieda play their home games at the Fujieda Sports Complex Park which has a capacity of 5,056 and was opened in 2002. [7]

As of 3 March 2021. [8] Note: Flags indicate national team as defined under FIFA eligibility rules. Players may hold more than one non-FIFA nationality.

Fujieda is a city located in Shizuoka Prefecture, Japan. As of 30 April 2019, the city has an estimated population of 145,032 in 59,480 households, and a population density of 750 persons per km². The total area of the city was 194.06 square kilometres (74.93 sq mi). Fujieda is a member of the World Health Organization’s Alliance for Healthy Cities (AFHC).

Avispa Fukuoka is a Japanese professional football club, currently play in the J1 League. The team is located in Hakata, Fukuoka. "Avispa" means "wasp" in Spanish. They were originally called Fujieda Blux and based in Fujieda, Shizuoka before moving to Fukuoka in 1994. After becoming the champions of 1995 Japan Football League as Fukuoka Blux, and being admitted to the J.League since 1996 season, Avispa Fukuoka has the longest history as a J.League club being uncrowned in any nationwide competitions such as J.League Division 1, Division 2, J.League Cup, or Emperor's Cup.

Kerlon Moura Souza is a Brazilian former professional footballer who played as an attacking midfielder. After retiring, he worked as a coach at Olé Soccer in the United States.

Toshihide Saito is a former Japanese football player and manager. He played for Japan national team.

Desmond N'Ze Kouassi known as Desmond N'Ze or just Desmond in Japan, is a naturalized Italian footballer of Ghanaian descent who plays as a defender and is currently a free agent after leaving his most recent club, J3 League side Fujieda MYFC. N'Ze currently works as a personal assistant for his friend Mario Balotelli.

Daisuke Sudo is a former Japanese football player and manager.

Musashi Mizushima is a former Japanese football player and manager.

Atsuto Oishi is a former Japanese football player and manager.

Ken Hisatomi is a Japanese football player who plays as a midfielder for J2 League team Blaublitz Akita.

Park Il-gyu is a South Korean football player, who plays for Sagan Tosu as a goalkeeper.

Ryuji Mochizuki is a former Japanese footballer who last played for Fujieda MYFC.

Hiroki Waki is a Japanese football player. He plays for Fujieda MYFC. 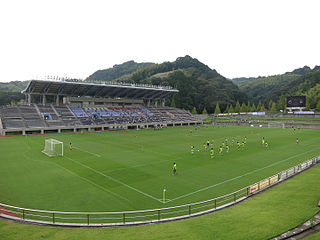 Fujieda Soccer Stadium (藤枝総合運動公園サッカー場) is a multi-use stadium built in Fujieda, Shizuoka Prefecture, Japan. It was used by Senegal for a precursory 2002 FIFA World Cup training camp. It is the home stadium of football club Fujieda MYFC.

Junto Taguchi is a Japanese football player for Fujieda MYFC.

The 2021 J3 League, referred to as the 2021 Meiji Yasuda J3 League for sponsorship reasons, was the 8th season of J3 League under its current name.