His father Colonel Fulke Walwyn was an officer in the Royal Welch Fusiliers, and Master of the Monmouth Hounds from 1922 to 1931. His mother died when Helen and Fulke were still young.

He was educated at Malvern College and the Royal Military College, Sandhurst, and then became an officer in the 9th Lancers but resigned his commission in 1935. He was a military policeman for two years in the Second World War, before serving with the 9th Lancers in France.

As a jockey, his most notable victory came as an amateur rider on Reynoldstown in the 1936 Grand National. He rode as a professional after he left the army, but was forced to retire from riding after a fall at Ludlow in 1939 fractured his skull. He bought a stables at Delamere House in Lambourn, and had immediate success, training 18 winners before the outbreak of the Second World War. Walwyn attempted to rejoin the forces but was rejected because of his racing injuries. He moved to Saxon House stables in 1944, and became one of the most successful National Hunt trainers of all time.

He trained 40 winners at the Cheltenham Festival between 1946 and 1986, a record which stood until 2012, when beaten by Nicky Henderson. He is commemorated at the Cheltenham Racecourse, in the title of the Festival's Fulke Walwyn Kim Muir Challenge Cup.

Amongst his notable owners Dorothy Paget until 1954 and, following the death of Peter Cazalet in 1973, the Queen Mother. As well as his many victories in National Hunt racing, he also trained Dorothy Paget's Aldborough to win the Doncaster Cup and the Queen Alexandra Stakes on the Flat.

Walwyn became a household name in 1964, when his Cheltenham Gold Cup winner, Mill House, was defending his crown against Arkle, in an epic race that eventually saw Arkle win the first of his three Gold Cup victories.

He was appointed a Commander of the Royal Victorian Order (CVO) in 1983.

He died at Saxon House. In all, he achieved over 2000 wins. After his death, the 3-mile Kim Muir Memorial Chase at the Cheltenham National Hunt Festival was renamed the Fulke Walwyn Kim Muir Challenge Cup, in his honour. 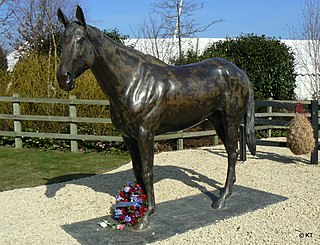 Best Mate was an Irish-bred, English-trained racehorse and three-time winner of the Cheltenham Gold Cup. He was considered one of the most loved horses in the history of horse racing in the UK, with his sudden death while racing making front-page news.

The RSA Insurance Novices' Chase is a Grade 1 National Hunt chase in Great Britain which is open to horses aged five years or older. It is run on the Old Course at Cheltenham over a distance of about 3 miles, and during its running there are twenty fences to be jumped. The race is for novice chasers, and it is scheduled to take place each year during the Cheltenham Festival in March. 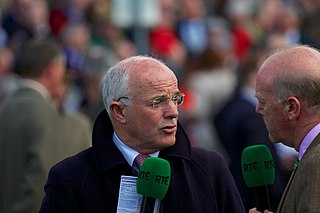 Mill House (1957–1975) was an Irish-bred but English-trained racehorse. He is considered one of the best National Hunt racing competitors in UK horse racing history but whose quality was overshadowed by arch rival Arkle. Mill House won the 1963 Cheltenham Gold Cup and 1967 Whitbread Gold Cup.

Dorothy Wyndham Paget was a British racehorse owner and sponsor of motor racing.

Peter Tyndall Walwyn, was a British racehorse trainer. He was based at stables in the Lambourn, Berkshire, area and enjoyed his period of greatest success in the mid-1970s when he was British flat racing Champion Trainer twice.

The Fulke Walwyn Kim Muir Challenge Cup is a National Hunt steeplechase in Great Britain for amateur riders; it is open to horses aged five years or older. The chase is run on the New Course at Cheltenham, over a distance of about 3 miles and 2 furlongs and, during its running, there are twenty-one fences to be jumped. It is a handicap race and it is scheduled to take place each year during the Cheltenham Festival in March.

Marcus Armytage [born 17 July 1964] is a journalist and former National Hunt jockey who won the Grand National as an amateur in 1990, riding Mr Frisk. He was educated at Eton College. Armytage's win in the 1990 Grand National on Mr Frisk came in a record time of 8m 47.80sec. It remains now the only sub nine-minute National, smashing Red Rum's previous record from 1973 by some 14 seconds, even though the race has been shortened since 2013. Armytage remains the last amateur rider to win the race. 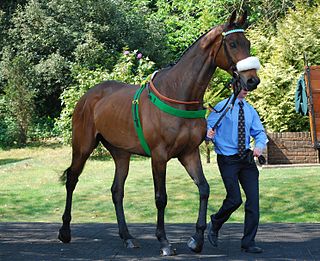 John Thomas "JT" McNamara was an Irish amateur steeplechase jockey. He won over 600 racecourse victories during his career. He sustained a serious back injury and a broken neck after a fall at the 2013 Cheltenham Festival which left him paralysed and using a wheelchair.

Stanley Thomas Edward Mellor is a former National Hunt jockey and trainer who was the first jockey to ride 1,000 winners and Champion Jockey three years in a row from 1960 to 1962.

Willie Robinson is a retired Irish jump jockey. He is the only jockey to have won the Hennessy Gold Cup three times. He is associated with the great steeplechaser, Mill House on whom he won both the Cheltenham Gold Cup and Hennessy. He also won the Champion Hurdle on Anzio and Kirriemuir and the Grand National on Team Spirit. Unusually for a jump jockey, he was also placed in the Derby.