Full House (Korean : 풀하우스; RR : Pul-hauseu) is a 2004 South Korean television series starring Song Hye-kyo, Rain, Han Eun-jung and Kim Sung-soo. Based on the manhwa Full House by Won Soo-yeon, the romantic comedy series aired on KBS2 on Wednesdays and Thursdays at 21:50 (KST) timeslot for 16 episodes from July 14 to September 2, 2004.

Considered a pioneer of the "romantic comedy" genre in Korean drama, the drama was a great success in Asia and helped propel the Korean Wave.

Han Ji-eun (Song Hye-kyo), an aspiring scriptwriter, lives in a house called "Full House" built by her late father. One day, her two best friends trick her into believing that she has won a free vacation. While she is away, they sell her house. On the plane, she meets a famous actor named Lee Young-jae (Rain). Through comedic events, they get acquainted during her vacation and when she returns, she discovers that her house has been sold to him.

Though they do not get along with each other due to their contrasting habits, they agree to live with each other. At first, Ji-eun works as his maid in order to buy her house back. However, later, they enter into a contract marriage as Young-jae wanted to make his crush, Kang Hye-won (Han Eun-jung), jealous. Complications arise as Ji-eun and Young-jae become attracted to each other.

An optimistic and cheerful girl who lives in the "Full House", which she inherited from her parents. She is an aspiring writer. She ends up marrying Young-jae under a contract marriage in order to keep the "Full House", but later falls in love with him.

A popular Korean actor. Though appearing to be egotistical and stubborn, he cares deeply for his friends. He possess secret unrequited feelings for his childhood friend, Hye-won but later falls in love with Ji-eun. He has a fragile relationship with his father, who is a doctor.

A close family friend of Young-jae, who knows him since childhood. Working as a fashion designer, she also designs most of Young-jae's clothes. With her wealth and looks, she is accustomed to attention from men, but has ever only loved Yoo Min-hyuk. She is selfish and manipulative, and attempts to hold on to Min-hyuk and Young-jae at the same time.

A play boy, he is smart and rich, but remains detached from people because of his busy lifestyle. He is also close friends with Young-jae, who confides in him his feelings for Han Ji-eun. Min-hyuk is a director of a large media company. He develops feelings for Han Ji-eun, and tries to get her to like him. Eventually, he sees that she can love no one else but Lee Young-jae.

The location of the titled house, Full House, is a house built specially for the series. It is located in the Gwangyeok-si area of Incheon, near Incheon International Airport, and is a ten-minute boat ride from Sammok Harbor. The house, made mostly of wood, cost approximately US$1 million to build. Nearby sightseeing locations include Jogak (sculpture) Park on Modo Island; a bridge connects these two islands. [1] The house remained a tourist attraction until it was torn down in April 2013 due to irreparable damage from a typhoon.

The first episode was shot in Shanghai near The Bund. In later episodes, some parts were filmed in Thailand.

Autumn in My Heart is a 2000 South Korean romantic television drama starring Song Seung-heon, Song Hye-kyo and Won Bin. The series is the first installment of season-themed tetralogy Endless Love drama series directed by Yoon Seok-ho. It aired on KBS2 from September 18 to November 7, 2000, on Mondays and Tuesdays at 21:55 (KST) for 16 episodes.

Seoul Institute of the Arts is a prominent educational institution specializing in the Arts located in Ansan, Gyeonggi Province, South Korea. The school has nurtured many graduates who are actively working in art related fields within Korea as well as internationally. The Namsan campus in the heart of Seoul is used for presentation of arts productions and convergence with industry. The Ansan Campus opened in 2001 and is used for educational training, which aims to tear down barriers between disciplines, genres, and majors. The Institute continues to be a forerunner in globalization of Korean arts and creation of new forms of arts. 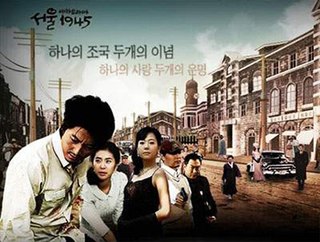 The King and I is a South Korean historical series that aired on SBS from August 27, 2007 to April 1, 2008 on Mondays and Tuesdays at 21:55. Starring Oh Man-seok, Koo Hye-sun and Go Joo-won, the series was moderately successful, with its ratings peak at 25%.

Que Sera, Sera is a 2007 South Korean television series starring Eric Mun, Jung Yu-mi, Lee Kyu-han, and Yoon Ji-hye. It aired on MBC from March 17 to May 13, 2007 on Saturdays and Sundays at 21:40 for 17 episodes. It is a passionate, violent and twisted drama about emotional abuse, the notion that love is a zero-sum game, and that sometimes, you can even buy love.

Worlds Within is a 2008 South Korean television series starring Hyun Bin and Song Hye-kyo. It centers on the personal and professional lives of those in the broadcasting industry, offering a realistic look at Korean drama production through the work and romance of two TV directors. The series aired on KBS2 from October 27 to December 16, 2008 on Mondays and Tuesdays at 21:50 (KST) time slot for 16 episodes.

I Am Legend is a South Korean television series starring Kim Jung-eun that was broadcast on SBS on August 2 to September 21, 2010.

House of Bluebird is a 2015 South Korean television series starring Lee Joon-hyuk, Chae Soo-bin, Lee Sang-yeob and Kyung Soo-jin. It aired on KBS2 from February 25 to August 9, 2015, on Saturdays and Sundays at 19:55 (KST) for 50 episodes.

Who Are You: School 2015 is a South Korean television series, starring Kim So-hyun, Nam Joo-hyuk, and Yook Sung-jae. It aired on KBS2 from April 27 to June 16, 2015 every Monday and Tuesday at 21:55 KST for 16 episodes. It is the sixth installment of KBS's School series which premiered in 1999. 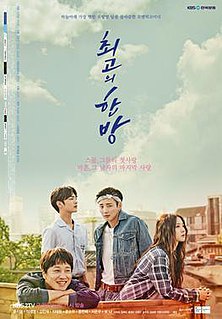 Hit the Top is a South Korean television series starring Yoon Shi-yoon, Lee Se-young, Kim Min-jae and Cha Tae-hyun. The drama aired on KBS2, from June 2 to July 22, 2017, on Fridays and Saturdays at 23:00 (KST) for 32 episodes. 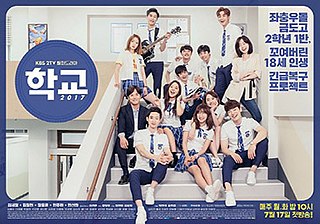 School 2017 is a South Korean television series starring Kim Jung-hyun, Kim Se-jeong, Jang Dong-yoon, Han Sun-hwa, and Han Joo-wan. It aired on KBS2 from July 17 to September 5, 2017 every Monday and Tuesday at 22:00 (KST) for 16 episodes. The series is the seventh installment of KBS2's School franchise. 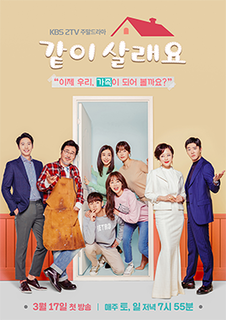 Marry Me Now is a 2018 South Korean television series starring Han Ji-hye and Lee Sang-woo. The series aired on KBS2 from March 17 to September 9, 2018. 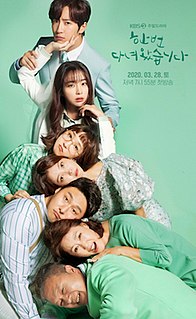 Born Again is a 2020 South Korean television series starring Jang Ki-yong, Jin Se-yeon and Lee Soo-hyuk. It tells the story of two men and one woman who become involved in the 1980s and again in the present day through reincarnation and fate. The series aired on KBS2 from April 20 to June 9, 2020 on Mondays and Tuesdays at 22:00 (KST) time slot.