Santa Cruz is a Spanish or Portuguese term meaning "holy cross" and referring to the cross on which Jesus was crucified.

Santa Cruz Futebol Clube is a Brazilian football club based in Recife, Pernambuco.

Clube Náutico Capibaribe, also known as Náutico, is a Brazilian sports club, including a professional football team, in Recife, Pernambuco. Náutico, as of 2021, is competing in the Série B.

Joinville Esporte Clube, JEC or simply Joinville, is a Brazilian football team from Joinville in Santa Catarina. Founded on January 29, 1976 they have won the Série B and Série C once and they have the largest sequence of consecutive state titles, eight.

Grêmio Esportivo Brasil, also known as Brasil de Pelotas, is a Brazilian football team in Pelotas, Rio Grande do Sul. It was founded on September 7, 1911. The club mascot is a Xavante Indian. The team wears red and black colours. The club has as nicknames Xavante, Rubro-Negro and Team of Warriors, due to its history of victories and classifications with the hard work and graft of its players. At the moment it contests the Série B of the Brazilian Championship and Gauchão Série A.

The Estádio Santa Cruz is a multi-purpose stadium in Ribeirão Preto, São Paulo state, Brazil. It is currently used mostly for football matches. The stadium holds 29,292 people. It was built in 1968. The stadium is owned by Botafogo Futebol Clube, commonly referred to Botafogo-SP, and its name honors the neighborhood where it was built. 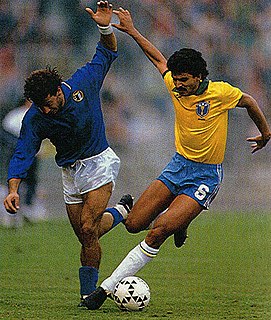 Santa Cruz do Sul is a city in central Rio Grande do Sul, Brazil. The city has an estimate 131,000 inhabitants as of 2020 and sits about 150 km from the capital city of the state, Porto Alegre. The city enjoys a high standard of living and gross income per capita is 2.5 times greater than that of the state of Rio Grande do Sul as a whole.

Clube Náutico Marcílio Dias, usually known simply as Marcílio Dias is a Brazilian football club from Itajaí, Santa Catarina state. The club plays its home matches at Hercílio Luz and competed in Copa João Havelange in 2000, in the Campeonato Brasileiro Série B in 1989, in the Campeonato Brasileiro Série C in 1988, 1995, 2001, 2003, 2005 and 2006. The club won the Recopa Sul-Brasileira in 2007, the state championship in 1963, and the state cup in 2007.

Felipe Manoel Gonçalves, known as Felipe Manoel or simply Felipe, is a Brazilian professional footballer who plays for ABC Futebol Clube as a central midfielder.

Esporte Clube Pelotas, more commonly referred to as Pelotas, is a professional football club based in Pelotas, Rio Grande do Sul, Brazil. Founded in 1908, it plays in the Série D, the fourth tier of Brazilian football, as well in the Campeonato Gaúcho, the state of Rio Grande do Sul's premier state league, holding home games at Estádio Boca do Lobo, with a 23,336-seat capacity.

Campeonato Paulista Série A3 is the third level of the São Paulo state professional football championship, one of the Brazilian state championships.

Esporte Clube Avenida, commonly referred to as Avenida, is a Brazilian football club based in Santa Cruz do Sul, Rio Grande do Sul. It currently plays in Campeonato Gaúcho Série A2, the second level of the Rio Grande do Sul state football league. Rogério Zimmermann is a Brazilian retired footballer who played as a right back, and is a current manager.