Ushakov was born in the village of Burnakovo in the Yaroslavl gubernia, to a modest family of the minor nobility. His father, Fyodor Ignatyevich Ushakov, was a retired sergeant of the Preobrazhensky regiment of the Russian Imperial guards [1] . By the time Fyodor Ushakov submitted his statement of background (skaska) to the military, his family had not been officially confirmed in the so-called 'dvoryanstvo', yet they surely belonged to serving gentry [1] . In the submission Ushakov stated that he neither had a coat-of-arms, nor a royal patent for a landed estate, and had no way to prove nobility [1] . In 1798, Fyodor Ushakov, as a vice-admiral of the Black Sea Navy, submitted a request for official nobility and an arms providing a genealogical record [1] . In 1807 his coat-of-arms was added to the General all-Russian book heraldry [1] . In 1815 Fyodor Ushakov and his family were added to the part 6 (ancient nobility) of the Yaroslavl genealogical book [1] .

On 15 February 1761, he signed up for the Russian Navy in Saint Petersburg. After training, he served on a galley in the Baltic Fleet. In 1768 he was transferred to the Don Flotilla (Azov Sea Navy) in Taganrog, and served in the Russo-Turkish War (1768–74). He commanded Catherine II's own yacht, and was active in protecting Russian merchant ships in the Mediterranean during First League of Armed Neutrality.

After the Russian Empire conquered Crimean Khanate in 1783, Ushakov personally supervised the construction of a naval base in Sevastopol and the building of docks in Kherson. During the Russo-Turkish War (1787–92), he defeated the Ottomans at Fidonisi (1788), Kerch Strait (1790), Tendra (1790), and Cape Kaliakra (1791). In these battles, he demonstrated the ingenuity of his innovative doctrines in the art of naval warfare.

In 1798 Ushakov was promoted to full admiral and given command of a squadron which sailed to the Mediterranean via Constantinople, where it joined with a Ottoman squadron. The combined Russian-Ottoman fleet then operated under Ushakov's command in the War of the Second Coalition against the French Republic. The expedition started by conquering the Ionian islands, acquired by France the year before from the defunct Republic of Venice in the Treaty of Campo Formio. This action culminated in the Siege of Corfu (1798–1799), and led to the subsequent creation of the Septinsular Republic. Ushakov's squadron then blockaded French bases in Italy, notably Genoa and Ancona, and successfully assaulted Naples and Rome.

Tsar Paul, in his capacity as the Grand Master of the Order of St. John, ordered Ushakov to proceed to Malta, which a British fleet under Nelson was assisting in besieging.

However, after appearing off the coast of Malta Ushakov was almost immediately recalled to Russia in 1800, where the new Emperor, Alexander I, failed to appreciate his victories. Ushakov resigned command in 1807 and withdrew into the Sanaksar Monastery in modern-day Mordovia. He was asked to command the local militia during the Patriotic War of 1812 but declined.

In the course of 43 naval battles under his command he did not lose a single ship and never lost a battle.

Distinguishing features of Ushakov's tactics were: use of unified marching and fighting orders; resolute closing to close quarters with the enemy forces without evolution of a fighting order; concentration of effort against enemy flagships; maintaining a reserve (Kaiser-flag squadrons); combination of aimed artillery fire and maneuvering; and chasing the enemy to its total destruction or capture. Giving great value to sea and fire training of his staff, Ushakov was a supporter of generalissimo Suvorov's principles of training for sailors and officers. Ushakov's innovations were among the first successful developments of naval tactics, from its "line" to maneuvering concepts.

Several warships have been named after Admiral Ushakov.

On 3 March 1944 the Presidium of the Supreme Soviet of the USSR established the Order of Ushakov for Navy officers who showed outstanding achievement leading to victory over a numerically superior enemy. This medal was one of several which was preserved in Russia upon the dissolution of the Soviet Union, thus remaining one of the highest military awards in the Russian Federation. The Ushakov Medal was established simultaneously for servicemen who had risked their life in naval theatres defending the Soviet Union. In May 2014, the medal was presented to 19 surviving British sailors who had served on the Arctic convoys during World War II in a ceremony aboard HMS Belfast. [2]

The Baltic Naval Institute in Kaliningrad also carries his name. The minor planet 3010 Ushakov, discovered by Soviet astronomer Lyudmila Ivanovna Chernykh in 1978, is named after him. [3]

In 1953 two Soviet films were released portraying his career Attack from the Sea and Admiral Ushakov . In both films he was played by Ivan Pereverzev.

The Russian Orthodox Church glorified Ushakov as a patron saint of the Russian Navy in 2000. His relics are preserved in Sanaksar Monastery. 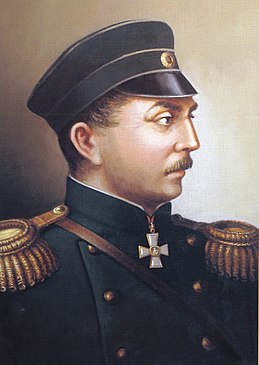 Pavel Stepanovich Nakhimov was one of the most famous admirals in Russian naval history, best remembered as the commander of naval and land forces during the Siege of Sevastopol during the Crimean War. The Baltic Fleet is the fleet of the Russian Navy in the Baltic Sea.

The Imperial Russian Navy was the navy of the Russian Empire from 1696 to 1917. It was formally established in 1696 and lasted until being dissolved during the February Revolution of 1917. It developed from a smaller force that had existed prior to Tsar Peter the Great's founding of the modern Russian Navy during the Second Azov campaign. It was expanded in the second half of the 18th century and by the early part of the 19th century, it reached its peak strength, behind only the British and French fleets in terms of size.

Filipp Sergeyevich Oktyabrsky was a Soviet naval commander. He began service in the Baltic Fleet in 1918. From 1925–27 he studied at the Naval Academy in Leningrad. As vice-admiral he was given command of the Black Sea Fleet in March 1939 and headed its actions during the Sieges of Sevastopol (1941-1942) and Odessa (1941). After the war he became a Deputy Commander-in-Chief of the Navy, commander of all naval test centres and from 1957 to 1960 head of the Black Sea Higher Naval Institute "Admiral Pavel Nakhimov" in Sevastopol.

The Order of Ushakov is a military decoration of the Russian Federation named in honour of admiral Fyodor Ushakov (1744–1817) who never lost a battle and was proclaimed patron saint of the Russian Navy. It is bestowed to command grade naval officers for outstanding leadership. The order was established in two classes during World War II by decision of the Presidium of the Supreme Soviet of the USSR of March 3, 1944. The idea was given to Joseph Stalin by admiral Nikolai Gerasimovich Kuznetsov in the summer of 1943. Following the 1991 dissolution of the USSR, the Order of Ushakov was retained unchanged by Decision of the Supreme Soviet of the Russian Federation 2557-I of March 20, 1992 but it was not awarded in this form. The all encompassing Presidential Decree 1099 of September 7, 2010 that modernised and reorganised the entire Russian awards system away from its Soviet past amended the Order to its present form, a ribbon mounted single class Order. 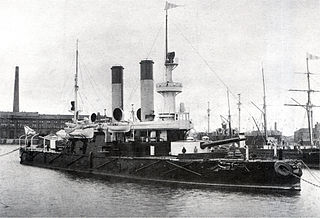 Admiral Ushakov was the lead ship in her class of armoured warships of the Imperial Russian Navy, and named after Admiral Fyodor Fyodorovich Ushakov the Russian naval commander of the 18th century.

The Admiral Ushakov class were coastal defense battleships built for the Imperial Russian Navy during the 1890s to counter armored ships of the Swedish Navy. All three ships were stationed in the Baltic Sea when the Russo-Japanese war began and sailed with the Baltic Fleet around the Cape of Good Hope to the Pacific. Two ships were captured by the Japanese and one was scuttled during the Battle of Tsushima.

The Siege of Corfu was a military operation by a joint Russian and Turkish fleet against French troops occupying the island of Corfu. 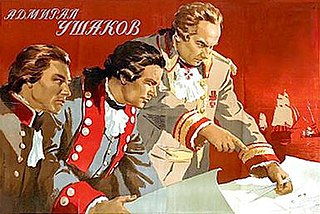 Monument to Fyodor Ushakov — is a monument in Rostov-on-Don, Russia, dedicated to Russian admiral Fyodor Ushakov, the commander of the Black Sea Fleet, the commander of the Russian-Turkish squadron in the Mediterranean. The monument was opened on September 16, 2001. Sculptor ― Honored Artist of the Russian Federation (2004) Anatoly Andreevich Sknarin.

Nikolai Ignatevich Vinogradov was an officer of the Soviet Navy who rose to the rank of admiral.

Yuri Fedorovich Rall was an officer of the Imperial Russian and Soviet Navies. He saw action during the First and Second World Wars, and rose to the rank of vice-admiral.

Already in the 9th century, the old Russian State of Kievan Rus' had the powerful naval fleet which is proved by the successful naval Siege of Constantinople of 860 However the naval fleet was irregular and was built only for the purpose of raids. Due to several major weakness of the naval fleet and in addition destructive invasion by the Mongol Empire, later the irregular naval fleet of the Russian principalities was dissolved. Except for the Principality of Novgorod which had access to the open seas and also was saved from Mongol invasions. As the first and proper Russian state of the Grand Duchy of Moscow begun and also got access to open water bodies, the Golden Age of the Russian Navy began. In 1570, in order to protect Russian navigation at the Baltic Sea, Ivan the Terrible created a flotilla which existed for about a year. In the 16th century, the Tsardom of Russia fought against the Ottoman Empire to get free access to the Black Sea.