Gökhan Güleç (born 25 September 1985) is a Turkish footballer who currently plays for Şanlıurfaspor.

Güleç was transferred to his previous club, Beşiktaş, on 17 January 2006 by French Manager Jean Tigana who was advised by Turkish National Team manager Fatih Terim. He has currently scored 10 goals in 20 Turkish Super Cup games. [1] In November 2009 he opened the scoring in his team's shock 1–3 away win at Fenerbahce. [2] In five games, he had scored six goals in the first half of the 2009 season, in all competitions.

In December 2012, Güleç agreed to join Azerbaijan Premier League side Khazar Lankaran [3] He played a total of 13 games, scoring twice before being released at the end of the 2012–13 season. Güleç is of Albanian origin. [4]

Geremi Sorele Njitap Fotso, known simply as Geremi, is a Cameroonian former footballer. He was a versatile player able to play at right back, right midfield or defensive midfielder, known for his power, combative style and free-kick ability. 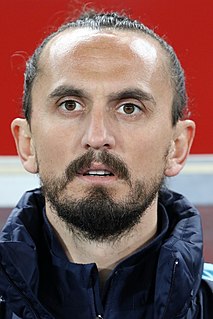 Tuncay Şanlı, known as Tuncay, is a Turkish former footballer.

Johan Erik Calvin Elmander is a Swedish former professional footballer who last played as a striker for Swedish team Örgryte IS. Elmander scored 20 goals in 85 games for the Swedish national team, and was chosen to represent his country at the 2006 World Cup, Euro 2008 and Euro 2012, before retiring from international duty in 2015. His 2–0 goal away to Wolverhampton Wanderers on 13 November 2010 was voted the greatest Premier League goal ever in a poll by The Guardian.

Servet Çetin is a Turkish footballer who last played for Mersin Idmanyurdu in the Süper Lig. He received the nickname Ayıboğan which literally means; a man who could choke a bear, due to his height and strength. He also has the nickname "Türkü Baba" due to a large number of Turkish folk songs on his iPod. 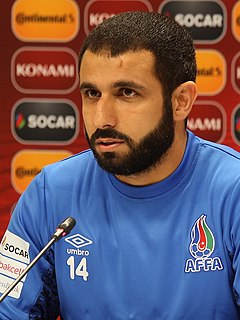 Rashad Sadygov is an Azerbaijani football defender that currently plays for FK Qarabağ as a captain. 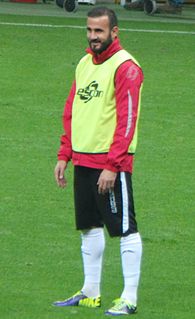 Gökhan Ünal is a former Turkish professional football player. He was the top goal scorer in the Turkcell Super League 2005/06 season, having scored 25 goals in a single season. End 2019 he is appointed as an assistant coach at Kayserispor in the coaching staff of Robert Prosinečki. 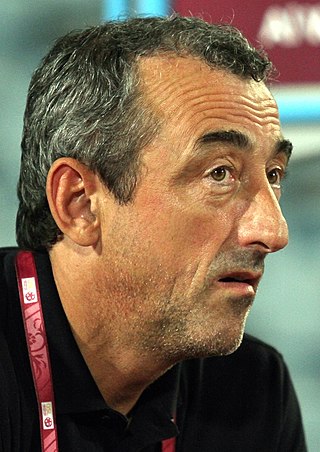 Mehmed Baždarević is a Bosnian professional football manager and former player. He was most recently the manager of Ligue 2 club Paris FC. 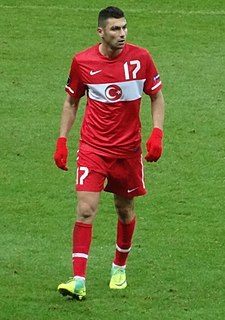 Burak Yılmaz is a Turkish professional footballer who plays as a striker for Beşiktaş and the Turkish national team. He has also played for the "big four" clubs in Turkey: Beşiktaş, Fenerbahçe, Trabzonspor and Galatasaray.

Gökhan İnler is a Swiss professional footballer who plays as a central midfielder for Turkish club İstanbul Başakşehir. 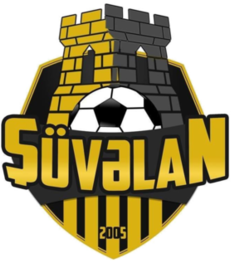 Shuvalan FK is an Azerbaijani football club based in Şüvəlan, Baku.

Nikolay Dimitrov is a Bulgarian professional footballer who currently plays as a winger for Russian Premier League club Ural Yekaterinburg.

Branimir Subašić is a retired Azerbaijani international footballer of Serbian descent who played as a striker.

Gökhan Gönül is a Turkish professional footballer who plays as a right back for Süper Lig club Beşiktaş. Gönül is also a senior international for Turkey. Gönül was born in Bafra, Samsun, where he and his family lived before moving to Bursa when Gönül was six years old. His uncle signed him up with Bursayolspor's youth squad in 1999, and Gönül began his footballing career as a goalkeeper. However, after several other young goalkeepers signed with the club, Gönül was moved to the outfield. After putting in several performances, Gönül was told he would not play goalkeeper again. At first, Gönül played football as a hobby and something to play when there was nothing else to do. He began taking the sport more seriously when his coach at the time, Mehmet Kirazoğlu, took him under his wing and trained him individually. Soon after, Gönül played in a senior match against 30-year-olds; Gönül was 13 at the time.

Mevlüt Erdinç is a Turkish professional footballer who plays as a forward for Fenerbahçe. 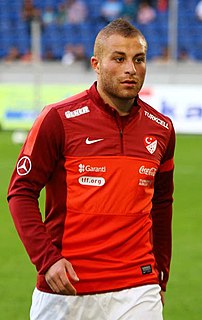 Oğuzhan Özyakup, also known as Ozzie or Ozzy, is a Turkish professional footballer who plays as a midfielder for Feyenoord on loan from Beşiktaş and the Turkish national team. 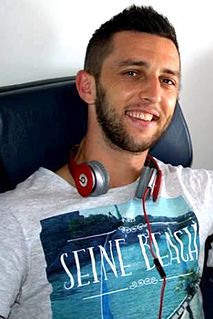 Muarem Muarem is a Macedonian association footballer. Muarem plays as a midfielder. He currently plays for the Macedonian First Football League side Shkupi and has played for Qarabağ in Azerbaijan, Eskişehirspor, Orduspor in Turkey and FK Rabotnički in Macedonia at club level as well as the Macedonia national football team, for whom he has three caps, all won in 2011. He has also represented Macedonia at under-17, under-19 and under-21 level. Muarem is right-footed.

The Khazar Lankaran 2012-13 season is Khazar Lankaran's eighth Azerbaijan Premier League season. Khazar Lankaran finished in 8th place in the league, after competing in the Relegation Championship during the second half of the season. They also reached the final of the Azerbaijan Cup, eventually losing to Neftchi Baku on penalties after a 0-0 draw. They competed in the 2012–13 UEFA Europa League, getting knocked out by Lech Poznań of Poland at the Second Qualifying Round stage having previously defeated Nõmme Kalju of Estonia, 4-2, in the First Qualifying Round. Khazar started the season under Yunis Huseinov, until he resigned on 31 October 2012. Erik Roqueta Capilla was appointed as their caretaker manager on 1 November 2012. On 14 November 2012, Carles Martorell Baqués was appointed as the club's permanent manager, replacing caretaker manager Erik Roqueta Capilla. Baqués resigned as manager on 26 February 2013. On 8 March 2013 John Toshack was announced as the new manager, taking over from 15 March 2013.