The Gąsawa massacre (Polish : Zbrodnia gąsawska, lit.  'Gąsawa crime') was an attack on the night of 23 / 24 November 1227 during a council of Polish Piast dukes which was being held near the village of Gąsawa in Kujawy, Poland. The High Duke of Poland, Leszek the White, was assassinated, and Duke Henry the Bearded of Silesia was gravely wounded. [1] [2]

Responsibility for the attack is generally ascribed by historians to Świętopełk of Pomerania. [3] Świętopełk's aim was to make the Duchy of Gdańsk Pomerania, which his House of Sobiesław held as regents of the Polish rulers, independent of Piast overlordship. The murder of Leszek the White, Świętopełk's suzerain, thus served his interests. However, several historians have pointed to Duke Władysław Odonic, [1] who had forged an alliance with Świętopełk shortly before the attack, as the main instigator. [4] Odonic's actual target would have been his uncle, Duke Władysław Spindleshanks, with whom Odonic had been involved in a long-running conflict over control of Greater Poland (Wielkopolska). Under this hypothesis, Odonic provided information necessary for a successful attack to Świętopełk's men, who actually did the deed.[ citation needed ]

Other historians have disputed this thesis, pointing out that Spindleshanks was not harmed in the attack, that Odonic did not profit from the death of Leszek (with whom he had had generally amicable relations), and that there is no record that contemporaries or the families of the slain held Odonic responsible. Rather, in this view, the blame was ascribed retroactively to Odonic several decades later, during fighting between Dukes of Silesia who were descendants of Henry, and those of Greater Poland, who were related to Odonic. A particularly puzzling fact is the absence of condemnation by ecclesiastical authorities (some of whom were present at the meeting), who at that time took an active role in Polish political affairs and tended to react strongly to regicides. [5]

Whatever the exact circumstances of, or the responsibility for, the event, it is generally accepted that the crime contributed to the deepening of the feudal fragmentation of Poland. Świętopełk successfully cast off the control of the Piast dukes over Gdańsk Pomerania and began using the title dux (rather than "regent"). [4] Piast control over the area was not re-established until the Treaty of Kępno (1282) between Mściwój II of Pomerania and Przemysł II (perhaps ironically, a grandson of Odonic). [1]

The death of Leszek the White undermined the authority and status of the "High Duke of Poland" (principat), who technically ruled over all the other regional Polish dukes; and the "seniorate" province of Kraków/Małopolska essentially became just another feudal area to be fought over. Poland, as a unified political entity, would not be re-established until the reign of Wenceslaus III or Władysław the Elbow-high at the turn of the 13th and 14th centuries. [1] [6]

Hedwig of Silesia, also Hedwig of Andechs, a member of the Bavarian comital House of Andechs, was Duchess of Silesia from 1201 and of Greater Poland from 1231 as well as High Duchess consort of Poland from 1232 until 1238. She was canonized by the Catholic Church in 1267 by Pope Clement IV. 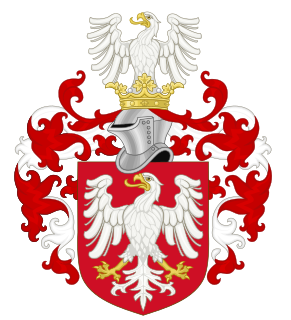 The House of Piast was the first historical ruling dynasty of Poland. The first documented Polish monarch was Duke Mieszko I. The Piasts' royal rule in Poland ended in 1370 with the death of king Casimir III the Great. 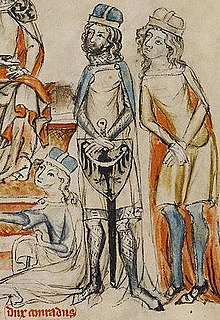 Henry II the Pious was Duke of Silesia and High Duke of Poland as well as Duke of South-Greater Poland from 1238 until his death. Between 1238 and 1239 he also served as regent of Sandomierz and Opole–Racibórz. He was the son of Henry the Bearded and a member of the Silesian Piast dynasty. In October 2015, the Roman Catholic Diocese of Legnica opened up his cause for beatification, obtaining him the title of Servant of God. 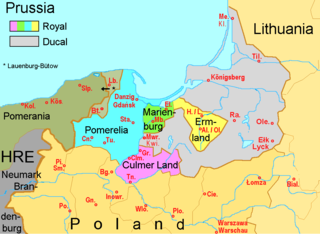 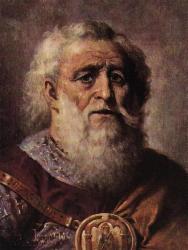 Mieszko III the Old, of the Piast dynasty, was Duke of Greater Poland from 1138 and High Duke of Poland, with interruptions, from 1173 until his death.

Mestwin I was Prince of Pomerelia from about 1205 until his death.

Swietopelk II, also Zwantepolc II or Swantopolk II,, sometimes known as the Great, was the ruling Duke of Pomerelia-Gdańsk from 1215 until his death. He was the first member of the Samborides to style himself dux from 1227 onwards.

Leszek the White was Prince of Sandomierz and High Duke of Poland in the years 1194–1198, 1199, 1206–1210, and 1211–1227. During the early stages of his reign, his uncle Duke Mieszko III the Old and cousin Władysław III Spindleshanks, from the Greater Polish branch of the royal Piast dynasty, contested Leszek's right to be High Duke. 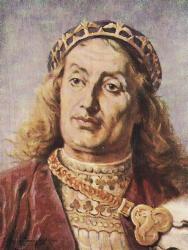 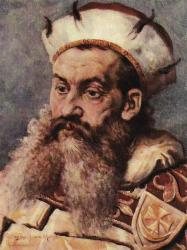 Henry the Bearded was a Polish duke from the Piast dynasty.

The Duchy of Pomerelia, also known as the Duchy of Eastern Pomerania, and Gdańsk Pomerania was a duchy centred on Pomerelia, with Gdańsk as its capital. 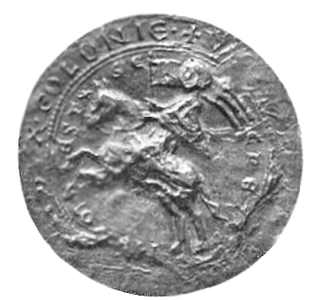 The Samborides or House of Sobiesław were a ruling dynasty in the historic region of Pomerelia. They were first documented about 1155 as governors (princeps) in the Eastern Pomeranian lands serving the royal Piast dynasty of Poland, and from 1227 ruled as autonomous princes until 1294, at which time the dynasty died out. The subsequent war for succession between the Polish Piast dynasty, the Imperial Margraviate of Brandenburg and the State of the Teutonic Order resulted in the Teutonic takeover of Gdańsk (Danzig) in 1308. 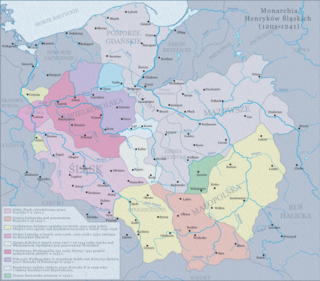 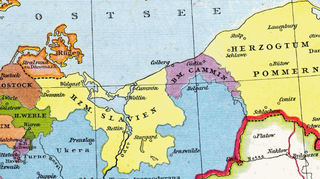 The Schlawe and Stolp Land, also known as Słupsk and Sławno Land, is a historical region in Pomerania, centered on the towns of Sławno (Schlawe) and Słupsk (Stolp) in Farther Pomerania, in present-day Poland. 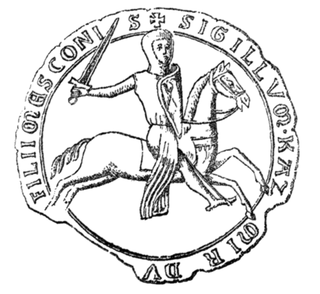 Casimir I of Opole, a member of the Piast dynasty, was a Silesian duke of Opole and Racibórz from 1211 until his death.

Duchy of Kraków was a duchy in Lesser Poland that existed from 1227 until 1300. Its capital was Kraków. It was formed in 1227 from the Seniorate Province, following the abolishment of the Duchy of Poland. It remained independent until 1300, when it had become a fiefdom within the Kingdom of Poland. In 1320, it was incorporated into the United Kingdom of Poland.

The Duchy of Gdańsk was a duchy in Pomerelia with its capital in Gdańsk. It was formed in 1227 from the partition of the Duchy of Pomerelia and existed until 1270 when it was incorporated back into it. 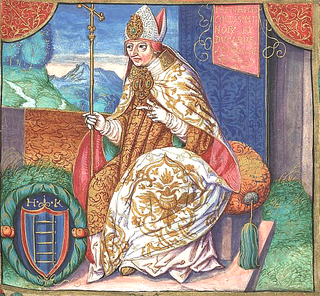 Henryk Kietlicz was Archbishop of Gniezno from 1199 to 1219 was the main architect of the changes that allowed the Polish church to gain independence from the secular authorities.