He has been the manager of Humanitas publishing house since 1990 [ citation needed ]. He has been professor at the University of Bucharest's Faculty of Philosophy since 1992.

He was greatly influenced by his mentor, Constantin Noica, especially during the time spent at Păltiniş (an experience that he evokes in his famous "Jurnalul de la Păltiniş" - "The Păltiniş Diary"). Noica, a Romanian philosopher known abroad as well as in the country, used to take his most valuable students and followers to his small house at Păltiniş, where he would teach them what they afterwards called "not philosophy lessons, but spiritual experiences". Another Noica follower who was invited to Păltiniş was Andrei Pleșu (Liiceanu and Pleşu are still friends today). Liiceanu refers to that experience in his books as the "Păltiniş School" and the term began to be widely accepted and used in Romanian, as well as European, philosophy. Liiceanu continued to publish well into the 2000s, and he remains a mainstream figure in Romanian intellectual public life, with close connections with Andrei Plesu, Monica Lovinescu and Virgil Ierunca. [2] One critic, Gabriel Andreescu, suggested that Liiceanu allegedly facilitated extremism by allowing his publishing house to edit the works of inter-war (Communist-persecuted) Romanian figures whom Andreescu accused of being "ideologues of right-wing extremism". [3]

His books are currently being published in Brazil by Editora Ecclesiae.

from Greek and German:

Vintilă Horia was a Romanian writer, winner of the Goncourt Prize, and convicted war criminal.

Constantin Noica was a Romanian philosopher, essayist and poet. His preoccupations were throughout all philosophy, from epistemology, philosophy of culture, axiology and philosophic anthropology to ontology and logics, from the history of philosophy to systematic philosophy, from ancient to contemporary philosophy, from translating and interpretation to criticism and creation. In 2006 he was included to the list of the 100 Greatest Romanians of all time by a nationwide poll.

Emil Botta was a Romanian actor and writer.

Andrei Gabriel Pleșu is a Romanian philosopher, essayist, journalist, literary and art critic. He has been intermittently involved in politics assuming the roles of Minister of Culture (1989–91), Minister of Foreign Affairs (1997–99) and presidential counsellor for external affairs (2004–05).

Humanitas is an independent Romanian publishing house, founded on February 1, 1990 in Bucharest by the philosopher Gabriel Liiceanu, based on a state-owned publishing house, Editura Politică. Its slogan is Humanitas, bunul gust al libertăţii.

Nicolae Steinhardt was a Romanian writer, Orthodox monk and lawyer.

Horia-Roman Patapievici is a Romanian physicist and essayist who served as the head of the Romanian Cultural Institute from 2005 until August 2012. Between 2000 and 2005, he was a member of the National Council for the Study of the Securitate Archives, supporting more openness regarding the files of the Securitate.

Alexandru Dragomir was a Romanian philosopher. He made his doctoral studies under Martin Heidegger's direction, in 1940.

Theodor Cazaban was a Romanian anti-communist writer. He graduated from the University of Bucharest with a degree in letters, and fled to France in 1947. While in Paris, he was a staff member of the anti-communist newspaper 'La Nation Roumaine' and contributed to the broadcasts of Radio Free Europe. In 1963 he published the novel Parages, in which he describes Communist persecutions of Romanian intellectuals, such as Mircea Eliade, Emil Cioran, Eugène Ionesco and others.

Romanian philosophy is a name covering either a) the philosophy done in Romania or by Romanians, or b) an ethnic philosophy, which expresses at a high level the fundamental features of the Romanian spirituality, or which elevates to a philosophical level the Weltanschauung of the Romanian people, as deposited in language and folklore, traditions, architecture and other linguistic and cultural artifacts.

Gabriel Andreescu is a Romanian human rights activist and political scientist born on 8 April 1952 in Buzău. He is one of the few Romanian dissidents who openly opposed Ceauşescu and the Communist regime in Romania. 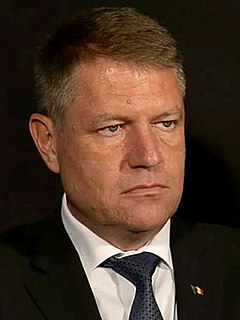 Presidential elections were held in Romania in 2014. In the first round on 2 November, the top two of the fourteen candidates qualified in a run-off on 16 November. Victor Ponta, Prime Minister and leader of the Social Democratic Party won around 40% of the vote, and Klaus Iohannis, mayor of Sibiu and leader of Christian Liberal Alliance, won around 30%. Following large protests on how Ponta's government organized the elections in the diaspora, Klaus Iohannis staged a surprising come-back and won the run-off with 54.5%, or more than a million votes than his contender.

Resistance through culture is a form of nonconformism. It is not open dissent, but a discreet stance.

Maria Băsescu is the wife of the 5th President of Romania Traian Băsescu. She was the First Lady of Romania from 2004 to 2014.

Cristina Nemerovschi is a Romanian writer.

Ionel Gherea, also known as Ioan Dobrogeanu-Gherea or Ion D. Gherea, was a Romanian philosopher, essayist, and concert pianist. The son of Constantin Dobrogeanu-Gherea, a Marxist theoretician and critic, and the brother of communist militant Alexandru "Sașa" Gherea, he discarded their political and literary influence, being more interested in the aestheticism of his brother-in-law, Paul Zarifopol. As a youth, Zarifopol took him to meet playwright Ion Luca Caragiale and his family. Gherea's debut as a writer was a 1920 novel written jointly with Luca Caragiale, which was also his only contribution to the genre.

Presidential elections were held in Romania on 10 November 2019, with a second round held on 24 November 2019. Incumbent President of Romania Klaus Iohannis, first elected in 2014, was eligible for re-election. He defeated Viorica Dăncilă in the second round of the election, receiving 66 percent of the vote–the second-highest vote share on record after Ion Iliescu. In accordance with the constitution, he will be required to leave office in 2024.

A consultative referendum took place in Romania on 26 May 2019, on the same day as the European Parliament elections, about whether to prohibit amnesties and pardons for corruption offences, as well as whether to prohibit the Government from passing emergency ordinances concerning the judiciary and to extend the right to appeal against them to the Constitutional Court. Both proposals were approved by wide margins.

This article documents the impacts of the 2019–20 coronavirus pandemic in Romania, and may not include all the contemporary major responses and measures.