Last updated June 16, 2021
Venezuelan actress and model
In this Spanish name, the first or paternal surname is Espinoand the second or maternal family name is Rugero.

Born in Maracay, Venezuela, Gaby Espino is the daughter of a chemical engineer and a publicist. [6] She is of Spanish, Native Venezuelan and Lebanese descent. [7] [8] Her parents divorced when she was young. She is the oldest of five children, she has a sister, Andreina, two paternal half-brothers, Gustavo and Mariano and a maternal half-sister, Nelly.

Due to her fascination with animals, she originally planned to become a veterinarian. She later decided to study dentistry, but changed her mind and began studying public relations, before deciding to become an actress. [9]

During the filming of Mas Sabe el Diablo in 2009, Espino was linked to her co-star, Jencarlos Canela. In early 2010, Espino and Lander separated and it was rumored that it was because Canela was dating Espino on the side. Canela and Espino denied this and stated they were just friends. [11]

Espino reconciled with Lander in November 2010, but they later divorced in March 2011 and once again rumors suggested that Canela and Espino were dating. [12] [13]

In September 2011, Canela and Espino did a live chat over social networking site Twitter, where they confirmed they were in relationship and announced that they were expecting their first child together. The godparents are Cristina Saralegui and Pitbull. Espino gave birth to their son, Nickolas Canela Espino, on February 12, 2012. On August 26, 2014 both Canela and Espino confirmed on their official Facebook page that they have decided to put an end to their relationship. [14] 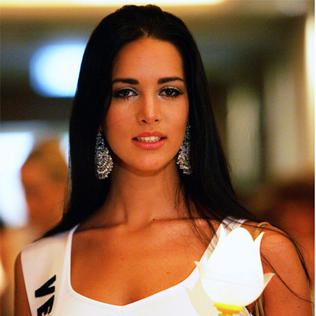 Mónica Spear Mootz was a Venezuelan actress, model and beauty pageant titleholder who won Miss Venezuela 2004. She also represented Venezuela at Miss Universe 2005 in Bangkok, Thailand where she finished as 4th runner-up.

Edith González Fuentes was a Mexican actress and dancer. She is best remembered and known for her works on multiple telenovelas produced by Televisa, TV Azteca and Telemundo.

Anna Sergeyevna Layevska, known as Ana Layevska, is a Mexican actress and singer, of Ukrainian descent. 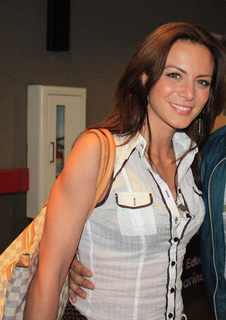 Silvia Angélica Navarro Barva is a Mexican actress. She debuted as actress in 1997, protagonising the telenovela Perla. Since then, she continued to work for Mexican TV network TV Azteca, and later for Televisa and Telemundo.

Marlene Favela is a Mexican actress and model. In Mexican television, as of 2013 she was best known as Esmeralda in the TV show Zorro, La Espada y la Rosa.

Jencarlos Canela is an American singer, songwriter and actor. Canela starred in the telenovela Más sabe el diablo, and two other telenovelas.

Cristóbal Lander is a Venezuelan actor and model.

Mauricio Henao Serbia is a Colombian actor best known for his roles in telenovelas for Telemundo.

Marjorie de Sousa is a Venezuelan actress and model of Portuguese descent, The Sousa Family is of noble origin and of Visigoth ancestry. She is known worldwide for her villainous roles in telenovelas.

Santa Diabla is an American telenovela written by José Ignacio Valenzuela, and produced by United States-based television network Telemundo Studios, Miami. The story begins with Gaby Espino and Carlos Ponce starring as the protagonists, while Aarón Diaz and Ximena Duque star as the antagonists.

Señora Acero, also known as Señora Acero: La Coyote, is an American telenovela created by Roberto Stopello and it started airing on American broadcast channel Telemundo on 23 September 2014, and concluded on 29 January 2019. Produced by Argos Comunicación and Telemundo Studios, and distributed by Telemundo Internacional.

Sheryl Dayana Rubio Rojas is a Venezuelan actress, singer, model, dancer, songwriter and fashion designer known for her role as Sheryl on the Boomerang Latin America series Somos tú y yo. Since 2018, Rubio has starred as Lucia Davila on the Netflix series The House of Flowers.

Tomorrow is a New Day is a Mexican telenovela produced by Carlos Moreno premiered on Las Estrellas on 16 April 2018. It is an adaptation of the 2009 Chilean telenovela Cuenta conmigo created by José Ignacio Valenzuela. The production started on February 26, 2018 at Forum 11 of Televisa San Ángel. It stars Angélica Vale as the main character.