Of Armenian descent, he joined the NKVD in 1931 while a graduate student at Moscow's Bauman Higher Technical School and went immediately into foreign intelligence.

Ovakimian was sent to Germany on an assignment emphasizing scientific-technical espionage. In 1932 he returned to the Soviet Union for advanced technical training at the Workers' and Peasants' Red Army Military-Chemical Academy. In 1933 he was sent to the United States as deputy head of the NKVD's scientific-technical intelligence section, operating under the cover of being an engineer for Amtorg.

The FBI agent, Robert J. Lamphere, has revealed that Gaik Ovakimian had been under investigation since soon after arriving in the United States. [1] FBI files show that "Ovakimian's recruits were scattered as far afield as Mexico and Canada... Americans whom Ovakimian recruited or controlled described him as charming, serious, sympathetic, well read in English literature, knowledgeable in science, and a man who inspired loyalty in his agents. He must also have been agile and politically aware, for he survived the great purges of the late 1930s which decimated the upper ranks of the Russian espionage services." [2]

While in the United States, Ovakimian ran the Golos spy ring and is credited with facilitating the assassination of Leon Trotsky. [3] He was Jacob Golos's primary contact. Ovakimian also received material from Klaus Fuchs through Harry Gold. Julius and Ethel Rosenberg were recruited by Ovakimian in 1938.

In 1939 Ovakimian became chief of scientific intelligence in the United States while at the same time began studying for a doctorate in chemistry at a New York University.

Ovakimian was arrested during a meeting on 5 May 1941 with an agent who had been turned by the FBI. After the German invasion of the Soviet Union on 22 June 1941, he was traded back to Moscow for the release of several Americans and left the United States 23 July 1941.

Ovakimian then became head of the NKVD's American desk in Moscow, responsible for espionage activities of Soviet agents within the United States and Canada. He was promoted to deputy chief of the NKVD's foreign intelligence in 1943 and attained the rank of major-general. A hitherto unknown memo from Ovakimian, head of the KGB's American desk, notes that "following our instructions," Harry Dexter White "attained the positive decision of the US Treasury Department to provide the Soviet side with the plates for engraving German occupation marks." [4] [5]

In 1946 Ovakimian left the NKVD to engage in full-time scientific work, as a chemical engineer. Possessing prodigious talent in mathematics as well as in chemistry, Ovakimian was responsible for the rapid development of the Soviet chemical arsenal in the 1950s as well as the application of agricultural chemistry for civilian purposes.

Ovakimian is identified in the Venona project decrypts as "Gennady".

Harry Dexter White was a senior U.S. Treasury department official. Working closely with the Secretary of the Treasury Henry Morgenthau, Jr., he helped set American financial policy toward the Allies of World War II. He was later accused of espionage by passing information to the Soviet Union. 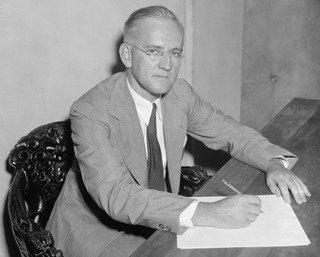 Lauchlin Bernard Currie worked as White House economic adviser to President Franklin Roosevelt during World War II (1939–45). From 1949 to 1953, he directed a major World Bank mission to Colombia and related studies. Information from the Venona project, a counter-intelligence program undertaken by agencies of the United States government, references him in nine partially decrypted cables sent by agents of the Soviet Union. He became a Colombian citizen after the United States refused to renew his passport in 1954, due to doubts of his loyalty to the United States engendered by the testimony of former Communist agents and information in the Venona decrypts.

Kitty Harris was a Soviet secret agent and "long-time special courier of the OGPU-NKVD foreign intelligence during the 1930s and 1940s."

Jacob Golos was a Ukrainian-born Bolshevik revolutionary who became an intelligence operative in the United States on behalf of the USSR. A founding member of the Communist Party of the United States of America (CPUSA), circa 1930 Golos became involved in the covert work of Soviet intelligence agencies. He participated in procuring American passports by means of fraudulent documentation, and the recruitment and coordination of activities of a broad network of agents. 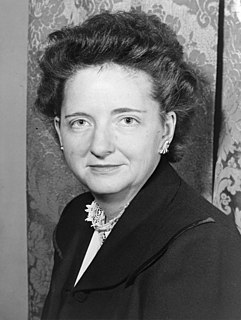 Elizabeth Terrill Bentley was an American spy and member of the Communist Party USA who served the Soviet Union from 1938 until 1945. In 1945, she defected from the Communist Party and Soviet intelligence by contacting the FBI and reporting on her activities.

Lt. Col. Duncan Chaplin Lee was confidential assistant to Maj. Gen. William Donovan, founder and director of the Office of Strategic Services (OSS), World War II-era predecessor of the CIA, during 1942-46. Lee is identified in the Venona project as the Soviet double agent operating inside OSS under the cover name "Koch," making him the most senior alleged source the Soviet Union ever had inside American intelligence.

Since the late 1920s, the Soviet Union, through its GRU, OGPU, NKVD, and KGB intelligence agencies, used Russian and foreign-born nationals as well as Communists of American origin to perform espionage activities in the United States. These various espionage networks had contact with various U.S. government agencies, transmitting to Moscow information that would have been deemed confidential. 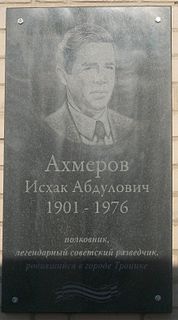 Iskhak Abdulovich Akhmerov (1901–1976) was a highly decorated OGPU/NKVD (KGB) Soviet security officer, best known to historians for his role in KGB operations in the United States 1942–1945. His name appears in the Venona decryptions over fifty times, often as signatory, and on his return to the Soviet Union in 1945/46, he rose to deputy chief of the KGB's 'illegal' intelligence section.

Harry Magdoff was accused by a number of authors as having been complicit in Soviet espionage activity during his time in US government. He was accused of passing information to Soviet intelligence networks in the United States, primarily through what the FBI called the "Perlo Group." Magdoff was never indicted, but after the end of the Cold War, a number of scholars have inspected declassified documents from U.S. and Soviet archives. They cite these documents to support the claim that Magdoff was involved in espionage. Other authors have taken issue with some of the broader interpretations of such materials which implicate many Americans in espionage for the Soviet Union, and the allegation that Harry Magdoff was an information source for the Soviets is disputed by several academics and historians asserting that Magdoff probably had no malicious intentions and committed no crimes.

Alexander Koral was an American member of the Communist Party of the United States (CPUSA) who headed a network of spies for Soviet intelligence during World War II called the "Art" or "Berg" group. Koral's wife, Helen Koral, also was involved with the group.

Ignacy Witczak was a GRU illegal officer in the United States during World War II. 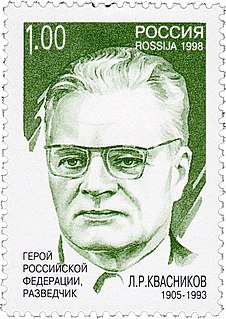 Leonid Romanovich Kvasnikov was a Russian chemical engineer and a spy, serving first in NKVD and later served in KGB. Graduated with honors from the Moscow Institute of Chemical Machine-Building in 1934 and worked as an engineer in a chemical plant for several years in the Tula region. Kvasnikov continued postgraduate engineering studies and joined the KGB in 1938 as a specialist in scientific-technical intelligence. Beginning in 1939 he was the section head of scientific and technical intelligence. Kvasnikov served a few short-term assignments in Germany and Poland and rising swiftly to become deputy chief and then chief of the KGB scientific intelligence section.

Elza Akhmerova, also Elsa Akhmerova was an American citizen, born Helen Lowry. She is a niece of Earl Browder, General Secretary of the Communist Party of the United States (CPUSA). She died of leukemia.

Mikhail Tkach, also Michal Tkacz, Michael J. Tkach, and M. Nastivsky, born in Mastisiw, Poland, of Ukrainian parents, and arrived in the United States at New York City on November 25, 1909, under the name Michal Tkacz. Tkach's wife, Yeroslava, was born in Slatchev, Poland, and entered the U.S. in 1913. The Tkachs lived in New York City from 1922 onwards. Tkach became a naturalized U. S. citizen in New York City on December 8, 1936.

William Marias Malisoff, also William Marias Malisov, was born in Ekaterinoslav, Russia, now Dnipro Ukraine, immigrated to the United States as a child, and became a naturalized United States citizen. Malisoff obtained a BS in 1916, an MA in 1917 and CE in 1918 degrees from Columbia University and a PhD. from New York University in 1925. Malisoff was an associate professor of biochemistry and lecturer in philosophy at University of Pennsylvania from 1922 to 1934. From 1934 to 1942 he was associate professor of biochemistry at Brooklyn Polytechnic Institute. In 1938-1939 Malisoff was delegated NEC member of University Federation for Democracy and Intellectual Freedom. He owned and operated United Laboratories, Inc, a company principally engaged in research on lubricating processes for chemical products, war industries and biochemistry. From 1936 to 1942 Malisoff was a regular contributor on science and technology to the New York Times Book Review. Malisoff along with Niels Bohr, Bertrand Russell, Ernest Nagel et al sat on the Advisory Committee of the International Encyclopedia of Unified Science. From 1934 to 1944 he was on the editorial board of Philosophy of Science journal. In 1945 Malisoff was connected with the Institute for the Unity of Science for a short time. Chemical researcher Kapok-Milkweed project, United States Navy, 1944; Essex College of Medicine, Newark, New Jersey, 1945-1946; Director of research Longevity Research Foundation, New York, since 1946.