Heliodorus married Julia Cassia Alexandra, princess of Judaea; she was the daughter of Gaius Julius Alexander Berenicianus and Cassia Lepida, a descendant of Cassius and Augustus. Their son was the usurper Avidius Cassius. [4] 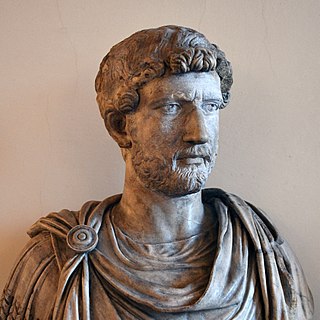 Hadrian was a Roman emperor from 117 to 138. He was born into a Roman Italo-Hispanic family that settled in Spain from the Italian city of Atri in Picenum. His father was of senatorial rank and was a first cousin of Emperor Trajan. He married Trajan's grand-niece Vibia Sabina early in his career, before Trajan became emperor and possibly at the behest of Trajan's wife Pompeia Plotina. Plotina and Trajan's close friend and adviser Lucius Licinius Sura were well disposed towards Hadrian.

The Julio-Claudian dynasty comprised the first five Roman emperors: Augustus, Tiberius, Caligula, Claudius, and Nero. They ruled the Roman Empire from its formation under Augustus in 27 BC until AD 68, when the last of the line, Nero, committed suicide. The name "Julio-Claudian" is a historiographical term derived from the two families which composed the imperial dynasty: the Julii Caesares and Claudii Nerones. 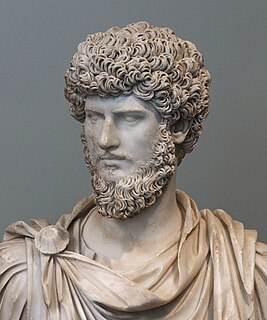 Lucius Aurelius Verus was Roman emperor from 161 until his death in 169, alongside his adoptive brother Marcus Aurelius. He was a member of the Nerva-Antonine dynasty. Verus' succession together with Marcus Aurelius marked the first time that the Roman Empire was ruled by multiple emperors, an increasingly common occurrence in the later history of the Empire. 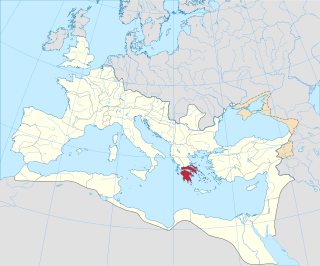 Achaea or Achaia, was a province of the Roman Empire, consisting of the Peloponnese, Attica, Boeotia, Euboea, the Cyclades and parts of Phthiotis, Aetolia-Acarnania and Phocis. In the north, it bordered on the provinces of Epirus vetus and Macedonia. The region was annexed by the Roman Republic in 146 BC following the sack of Corinth by the Roman general Lucius Mummius, who was awarded the cognomen "Achaicus". It became part of the Roman province of Macedonia, which included the whole of mainland Greece.

Gaius Avidius Cassius was a Roman general and usurper. He was born in Cyrrhus, and was the son of Gaius Avidius Heliodorus, who served as praefectus or governor of Roman Egypt, and Julia Cassia Alexandra, who was related to a number of royal figures, including her descent from both Augustus and Herod the Great. He began his military career under Antoninus Pius, rising to the status of legatus. He served during the Parthian war of Lucius Verus, in which he distinguished himself, for which he was elevated to the Senate, and later made Imperial legate. During the Bucolic War, he was given the extraordinary title of Rector Orientis, giving him Imperium over all of the eastern provinces of the Roman Empire.

The Roman–Parthian War of 161–166 was fought between the Roman and Parthian Empires over Armenia and Upper Mesopotamia. It concluded in 166 after the Romans made successful campaigns into lower Mesopotamia and Media and sacked Ctesiphon, a Parthian capital. 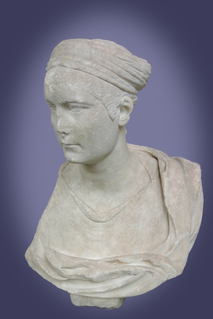 Avidia Plautia was a well-connected noble Roman woman. She is among the lesser known members of the ruling Nerva–Antonine dynasty of the Roman Empire.

The gens Avidia was a Roman family that flourished during the early centuries of the Empire. Several of its members rose to prominence during the late first and second centuries AD.

The gens Galeria was a Roman family of Imperial times. The family first rose to prominence under the Julio-Claudian dynasty, but the most illustrious person of the name was the emperor Galerius, one of the heirs of Diocletian, who reigned from AD 305 to 311, although he cannot have been a direct descendant of the earlier family.

Lucius Publilius Celsus was a Roman senator as well as a confidant of the emperor Trajan. He was consul twice: the first time as suffect consul for the nundinium of May to August 102 as the colleague of Titus Didius Secundus; the second time as ordinary consul for the year 113 with Gaius Clodius Crispinus as his colleague.

Lucius Sergius Paullus was a Roman senator, who was active during the reign of Marcus Aurelius. He was twice consul: the first time attested 23 September of an unknown year as suffect consul with [? Lucius Nonius Calpurnius] Torquatus Asprenas as his colleague; and as consul ordinarius for 168 as the colleague of Lucius Venuleius Apronianus Octavius Priscus.

Gaius Caecina Tuscus was a 1st-century Roman politician and governor of Egypt during the reign of Nero, and is mentioned by Tacitus. Tuscus was a member of the Caecini, an Etruscan family of Volaterrae, one of the ancient cities of Etruria.