Gaius Julius Civilis was the leader of the Batavian rebellion against the Romans in 69 AD. His nomen shows that he (or one of his male ancestors) was made a Roman citizen (and thus, the tribe a Roman vassal) by either Augustus or Caligula.

He was twice imprisoned on a charge of rebellion, and narrowly escaped execution. During the disturbances that followed the death of Nero, he took up arms under pretense of siding with Vespasian and induced the inhabitants of his native country to rebel. The Batavians, who had rendered valuable service under the early emperors, had been well treated in order to attach them to the cause of Rome. They were exempt from tribute, but were obliged to supply a large number of men for the army, and the burden of conscription and the oppression of provincial governors were important incentives to revolt. The Batavians were immediately joined by several neighboring Germanic tribes.

Main article: Revolt of the Batavi

The Roman garrisons near the Rhine were driven out, and twenty-four ships captured. Two legions under Mummius Lupercus were defeated at Castra Vetera (near the modern Xanten) and surrounded. Eight cohorts of Batavian veterans joined their countrymen, and the troops sent by Vespasian to the relief of Vetera threw in their lot with them.

"Let Syria, Asia Minor, and the East, habituated as it is to despotism, submit to slavery... Freedom is a gift bestowed by nature even on the dumb animals. Courage is the peculiar excellence of man, and the Gods help the braver side." - Gaius Julius Civilis [1]

The result of these accessions to the forces of Civilis was a rising in Gaul. Hordeonius Flaccus was murdered by his troops (70 AD), and the whole of the Roman forces were induced by two commanders of the Gallic auxiliaries —Julius Classicus and Julius Tutor— to revolt from Rome and join Civilis. The whole of Gaul thus practically declared itself independent, and the foundation of a new kingdom of Gaul was contemplated. The prophetess Veleda predicted the complete success of Civilis and the fall of the Roman Empire. But disputes broke out among the different tribes and rendered co-operation impossible; Vespasian, having successfully ended the civil war, called upon Civilis to lay down his arms, and on his refusal resolved to take strong measures for the suppression of the revolt.

The arrival of Quintus Petillius Cerialis with a strong force awed the Gauls and mutinous troops into submission; Civilis was defeated at Augusta Treverorum (Trier, Trèves) and Castra Vetera, and forced to withdraw to the island of the Batavians. He finally came to an agreement with Cerialis whereby his countrymen obtained certain advantages, and resumed amicable relations with Rome. From this time, Civilis disappears from history.

The Batavi were an ancient Germanic tribe that lived around the modern Dutch Rhine delta in the area that the Romans called Batavia, from the second half of the first century BC to the third century AD. The name is also applied to several military units employed by the Romans that were originally raised among the Batavi. The tribal name, probably a derivation from batawjō, refers to the region's fertility, today known as the fruitbasket of the Netherlands. 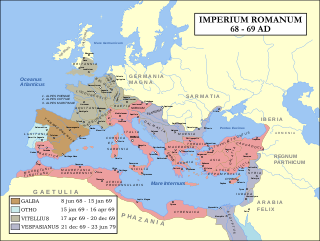 AD 70 (LXX) was a common year starting on Monday of the Julian calendar. At the time, it was known as the Year of the Consulship of Vespasian and Titus. The denomination AD 70 for this year has been used since the early medieval period, when the Anno Domini calendar era became the prevalent method in Europe for naming years. 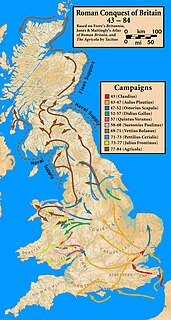 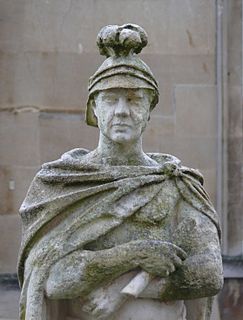 Gaius Suetonius Paulinus was a Roman general best known as the commander who defeated the rebellion of Boudica.

Legio I Germanica, the 1st Germanic Legion, was a legion of the Imperial Roman army, possibly founded in 48 BC by Julius Caesar to fight for him in the civil war against Pompey. The title germanic is a reference to its service in Germany, rather than the place of origin of its soldiers. After the Revolt of the Batavi, the remaining men of the Germanica were added to Galba's seventh legion, which became VII Gemina. The emblem of Legio I is unknown, but it was probably Taurus, like all the other legions levied by Caesar.

Legio vigesima prima rapax was a legion of the Imperial Roman army. It was founded in 31 BC by the emperor Augustus, probably from men previously enlisted in other legions. The XXI Rapax was destroyed in 92 by the Sarmatians. The symbol of the legion is thought to have been a capricorn. 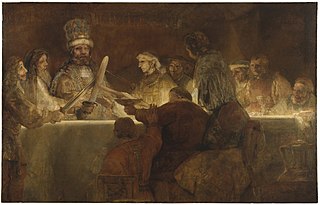 The Year of the Four Emperors, 69 AD, was a year in the history of the Roman Empire in which four emperors ruled in succession: Galba, Otho, Vitellius, and Vespasian.

Veleda was seeress of the Bructeri, a Germanic people who achieved some prominence during the Batavian rebellion of AD 69–70, headed by the Romanized Batavian chieftain Gaius Julius Civilis, when she correctly predicted the initial successes of the rebels against Roman legions.

The Iron Hand of Mars is a 1992 historical mystery crime novel by Lindsey Davis and the fourth book of the Marcus Didius Falco Mysteries series. Set in Rome and Germania during AD 71, the novel stars Marcus Didius Falco, informer and imperial agent. The iron in the title refers to the standard, shaped like a giant hand made of iron, which Falco is required to deliver to the imperial legions in Germany.

Julius Briganticus was a Batavian who commanded auxiliary cavalry in the Roman Army. He was the son of the sister of Gaius Julius Civilis, the leader of the Batavian rebellion, who apparently hated his nephew. The nomen Julius indicates he was a Roman citizen. The cognomen Briganticus perhaps suggests he, or his father, gained distinction fighting against the Brigantes of northern Britain.

Gaius Dillius Vocula was a Roman commander of the Legio XXII Primigenia during the Batavian revolt. Defending Castra Vetera, he was murdered by rebellious Roman troops. 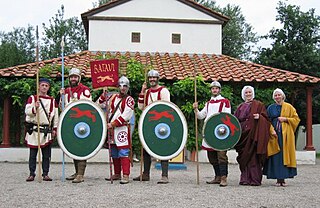 The Batavi was an auxilia palatina (infantry) unit of the Late Roman army, active between the 4th and the 5th century. It was composed by 500 soldiers and was the heir of those ethnic groups that were initially used as auxiliary units of the Roman army and later integrated in the Roman Empire after the Constitutio Antoniniana. Their name was derived from the people of the Batavi. 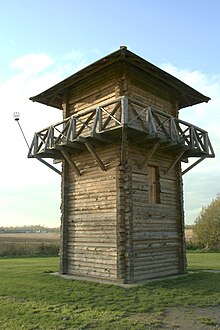 For around 450 years, from around 55 BC to around 410 AD, the southern part of the Netherlands was integrated into the Roman Empire. During this time the Romans in the Netherlands had an enormous influence on the lives and culture of the people who lived in the Netherlands at the time and (indirectly) on the generations that followed.

The Cugerni were a Germanic tribal grouping with a particular territory within the Roman province of Germania Inferior, which later became Germania Secunda. More precisely they lived near modern Xanten, and the old Castra Vetera, on the Rhine. This part of Germania Secunda was called the Civitas or Colonia Traiana, and it was also inhabited by the Betasii.