A gale is a strong wind; the word is typically used as a descriptor in nautical contexts. The U.S. National Weather Service defines a gale as sustained surface winds moving at a speed of between 34 and 47 knots (63–87 km/h, 17.5–24.2 m/s or 39–54 miles/hour) of. [1] Forecasters typically issue gale warnings when winds of this strength are expected. In the United States, a gale warning is specifically a maritime warning; the land-based equivalent in National Weather Service warning products is a wind advisory.

The most common way of measuring wind force is with the Beaufort scale [3] which defines a gale as wind from 50 kilometres per hour (14 m/s) to 102 kilometres per hour (28 m/s). It is an empirical measure for describing wind speed based mainly on observed sea conditions. On the original 1810 Beaufort wind force scale, there were four different "gale" designations whereas generally today there are two gale forces, 8 and 9, and a near gale 7:

The word gale is derived from the Middle English gale, a general word for wind of any strength, even a breeze. This word is probably of North Germanic origin, related to Icelandic gola (breeze) and Danish gal (furious, mad), [4] which are both from Old Norse gala (to sing), from Proto-Germanic *galaną (to roop, sing, charm), from Proto-Indo-European *gʰel- (to shout, scream, charm away). One online etymology website suggests that the word gale is derived from an earlier spelling, gail, which it claims is of uncertain origin. [5]

The Beaufort scale is an empirical measure that relates wind speed to observed conditions at sea or on land. Its full name is the Beaufort wind force scale.

A small craft advisory is a type of wind warning issued by the National Weather Service in the United States. In Canada a similar warning is issued by Environment Canada. It is issued when winds have reached, or are expected to reach within 12 hours, a speed marginally less than gale force. A Small Craft Advisory may also be issued when sea or lake ice exists that could be hazardous to small boats.

Tropical cyclone warnings and watches are alerts issued by national weather forecasting bodies to coastal areas threatened by the imminent approach of a tropical cyclone of tropical storm or hurricane intensity. They are notices to the local population and civil authorities to make appropriate preparation for the cyclone, including evacuation of vulnerable areas where necessary. It is important that interests throughout the area of an alert make preparations to protect life and property, and do not disregard it on the strength of the detailed forecast track. 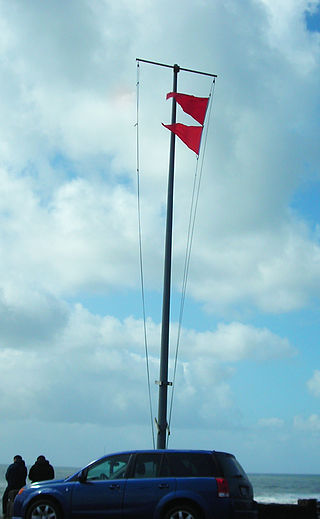 A gale warning is an alert issued by national weather forecasting agencies around the world in an event that maritime locations currently or imminently experiencing winds of gale force on the Beaufort scale. Gale warnings allow mariners to take precautionary actions to ensure their safety at sea or to seek safe anchorage and ride out the storm on land. Though usually associated with deep low-pressure areas, winds strong enough to catalyze a gale warning can occur in other conditions too, including from anticyclones, or high-pressure systems, in the continental interior. The winds are not directly associated with a tropical cyclone. 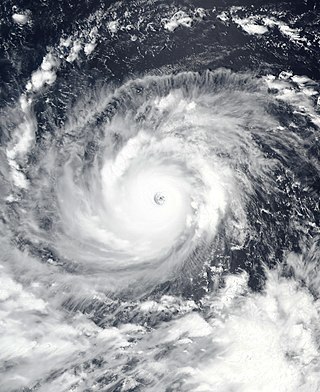 A typhoon is a mature tropical cyclone that develops between 180° and 100°E in the Northern Hemisphere. This region is referred to as the Northwestern Pacific Basin, and is the most active tropical cyclone basin on Earth, accounting for almost one-third of the world's annual tropical cyclones. For organizational purposes, the northern Pacific Ocean is divided into three regions: the eastern, central, and western. The Regional Specialized Meteorological Center (RSMC) for tropical cyclone forecasts is in Japan, with other tropical cyclone warning centers for the northwest Pacific in Hawaii, the Philippines, and Hong Kong. Although the RSMC names each system, the main name list itself is coordinated among 18 countries that have territories threatened by typhoons each year.

Tropical cyclones are ranked on one of five tropical cyclone intensity scales, according to their maximum sustained winds and which tropical cyclone basins they are located in. Only a few scales of classifications are used officially by the meteorological agencies monitoring the tropical cyclones, but other scales also exist, such as accumulated cyclone energy, the Power Dissipation Index, the Integrated Kinetic Energy Index, and the Hurricane Severity Index.

The 1933 Outer Banks hurricane lashed portions of the North Carolina and Virginia coasts less than a month after another hurricane hit the general area. The twelfth tropical storm and sixth hurricane of the 1933 Atlantic hurricane season, it formed by September 8 to the east of the Lesser Antilles. It moved generally to the north-northwest and strengthened quickly to peak winds of 140 mph (220 km/h) on September 12. This made it a major hurricane and a Category 4 on the Saffir-Simpson scale. The hurricane remained at or near that intensity for several days while tracking to the northwest. It weakened approaching the southeastern United States, and on September 16 passed just east of Cape Hatteras, North Carolina with winds of about 100 mph (160 km/h). Turning to the northeast, the hurricane became extratropical on September 18 before moving across Atlantic Canada, eventually dissipating four days later.

Tropical cyclone windspeed climatology is the study of wind distribution among tropical cyclones, a significant threat to land and people. Since records began in 1851, winds from hurricanes, typhoons and cyclones have been responsible for fatalities and damage in every basin. Major hurricanes usually cause the most wind damage. Hurricane Andrew for example caused $45 billion(2005 USD) in damage, most of it wind damage.

Wind is the natural movement of air or other gases relative to a planet's surface. Winds occur on a range of scales, from thunderstorm flows lasting tens of minutes, to local breezes generated by heating of land surfaces and lasting a few hours, to global winds resulting from the difference in absorption of solar energy between the climate zones on Earth. The two main causes of large-scale atmospheric circulation are the differential heating between the equator and the poles, and the rotation of the planet. Within the tropics and subtropics, thermal low circulations over terrain and high plateaus can drive monsoon circulations. In coastal areas the sea breeze/land breeze cycle can define local winds; in areas that have variable terrain, mountain and valley breezes can prevail.

A gale watch is issued by the National Weather Service of the United States when there is an increased risk for a gale-force wind event, meaning sustained surface winds, or frequent gusts, of 34 to 47 knots, but the occurrence, location, and/or timing of the event is still uncertain.

The 1933 Cuba–Bahamas hurricane was last of six major hurricanes, or at least a Category 3 on the Saffir-Simpson hurricane wind scale, in the active 1933 Atlantic hurricane season. It formed on October 1 in the Caribbean Sea as the seventeenth tropical storm, and initially moved slowly to the north. While passing west of Jamaica, the storm damaged banana plantations and killed one person. On October 3, the storm became a hurricane, and the next day crossed western Cuba. Advance warning in the country prevented any storm-related fatalities, although four people suspected of looting were shot and killed during a curfew in Havana. The German travel writer Richard Katz witnessed the hurricane while in Havana, and described the experience in his book "Loafing Around the Globe".

The 1945 Outer Banks hurricane was a moderate hurricane that struck Florida and affected the East Coast of the United States in late June, 1945. The first tropical storm and the first hurricane of the Atlantic season, it developed on June 20 in the western Caribbean Sea off Honduras. For the next two days, it moved generally northward into the Gulf of Mexico. Reaching hurricane intensity on June 23, it then turned northeast toward the Florida peninsula. It made landfall in the Big Bend on June 24, then weakened to a tropical storm over land. Minor damage was reported in Florida, but the storm produced heavy, though beneficial, rains that eased one of the state's worst recorded droughts. Upon entering the Atlantic Ocean, it re-intensified into a hurricane and paralleled the East Coast. On June 26, it struck the Outer Banks of North Carolina as a minimal hurricane, producing minor damage but heavy rainfall.

The following is a list of tropical cyclones by year. Since the year 957, there have been at least 12,791 recorded tropical or subtropical cyclones in the Atlantic, Pacific, and Indian Oceans, which are known as basins. Collectively, tropical cyclones caused more than US$1.2 trillion in damage, unadjusted for inflation, and have killed more than 2.6 million people. Most of these deaths were caused by a few deadly cyclones, including the 1881 Haiphong typhoon, the 1931 Shanghai typhoon, the 1970 Bhola cyclone, Typhoon Nina in 1975, the 1991 Bangladesh cyclone, and Cyclone Nargis in 2008.