The Galkynysh Gas Field, formerly known as Iolotan gas field or South Yolotan – Osman field, is a large natural gas field near Ýolöten in Mary Province of Turkmenistan. It is the world's second-largest gas field. [1]

The discovery of the gas field was announced on 2 November 2006. [2] Late Turkmen president Saparmurat Niyazov invited Chinese CNPC and Turkish Çalik Enerji to participate in the exploration and development of the Ýolöten field. [3] In 2008, the gas field was audited by Gaffney, Cline & Associates. [4] [5] According to Gaffney, Cline and Associates (GCA), Galkynysh is five times larger than the Dauletabad gas field and fourth- or fifth-largest gas field in the world. [6]

In December 2009, the contracts to develop the field were awarded to CNPC, Hyundai Engineering and Petrofac. [7]

Oil reserves are 300 million tons. The crude oil extracted at Galkynysh is transported to the Seýdi Oil Refinery.

Turkmenistan, also known as Turkmenia, is a sovereign country in Central Asia, bordered by Kazakhstan to the northwest, Uzbekistan to the north and east, Afghanistan to the southeast, Iran to the south and southwest and the Caspian Sea to the west. Ashgabat is the capital and largest city of the country. The population of the country is 6 million, the lowest of the Central Asian republics. Turkmenistan is one of the most sparsely populated nations in Asia. Citizens of Turkmenistan are known as Turkmenistanis, Turkmenians or Turkmens.

PJSC Gazprom is a Russian partially state-owned multinational energy corporation headquartered in the Lakhta Center in Saint Petersburg. As of 2019, with sales over US$120 billion, it sits as the largest publicly-listed natural gas company in the world and the largest company in Russia by revenue. In the 2020 Forbes Global 2000, Gazprom was ranked as the 32nd -largest public company in the world. Gazprom name is a portmanteau of the Russian words Gazovaya Promyshlennost.

The Rumaila oil field is a super-giant oil field located in southern Iraq, approximately 20 mi (32 km) from the Kuwaiti border. Discovered in 1953 by the Basrah Petroleum Company (BPC), an associate company of the Iraq Petroleum Company (IPC), the field is estimated to contain 17 billion barrels, which accounts for 12% of Iraq's oil reserves estimated at 143.1 billion barrels. Rumaila is said to be the largest oilfield ever discovered in Iraq and is considered the third largest oil field in the world.

The China National Petroleum Corporation (CNPC) is a major national oil and gas corporation of China and one of the largest integrated energy groups in the world. Its headquarters are in Dongcheng District, Beijing. CNPC was ranked fourth in 2020 Fortune Global 500, a global ranking of the largest corporations by revenue.

Novatek is Russia's second-largest natural gas producer, and the seventh-largest publicly traded company globally by natural gas production volume. The company was originally known as OAO FIK Novafininvest. Novatek is based in the Yamalo-Nenets Autonomous Region in West Siberia, and maintains a sales office in Moscow. In the 2020 Forbes Global 2000, Novatek was ranked as the 316th-largest public company in the world. 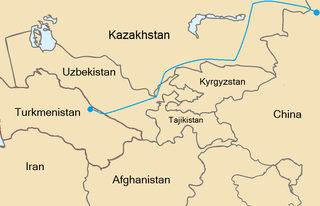 The West–East Gas Pipeline is a set of natural gas pipelines which run from the western part of China to the east.

The Dauletabad Gas Field is a large natural gas field located in Mary, Mary province, Turkmenistan. It is located in the vicinity of the Turkmenistan–Iran border, and is named after the Dowlatabad settlement across the border in Iran. The field is a part of the Amu-Darya oil-gas province.

Sino-Myanmar pipelines refers to the oil and natural gas pipelines linking Myanmar's deep-water port of Kyaukphyu (Sittwe) in the Bay of Bengal with Kunming in Yunnan province of China.

According to the Iran Petroleum Ministry, the proved natural gas reserves of Iran are about 1,201 trillion cubic feet (34.0 trillion cubic metres) or about 17.8% of world's total reserves, of which 33% are as associated gas and 67% is in non associated gas fields. It has the world's second largest reserves after Russia. As it takes approximately 5,850 cubic feet (166 m3) of gas to equal the energy content of 1-barrel (0.16 m3) of oil, Iran's gas reserves represent the equivalent of about 205 billion barrels (3.26×1010 m3) of oil.

The Vankor Field is an oil and gas field in Russia, located 130 kilometres (81 mi) west of Igarka in the Turukhansk District of Krasnoyarsk Krai in Eastern Siberia, close to the border with Yamalo-Nenets Autonomous Okrug. Its estimated reserves are 520 million metric tons of oil and 95 billion cubic meters of natural gas. Production was launched in August, 2009. The field is operated by Russian national oil company Rosneft through its subsidiary Vankorneft.

Saman-Depe Gas Field is a large natural gas field located in Lebap Province of Turkmenistan. The field belongs to contractual territory Bagtyyarlyk, a group of several fields on the right bank of Amu Darya River the maximum output of which is estimated at 25-30 billion cubic meters per year, combined. The peak of production is expected in 2015-2020. As per initial estimates, the fields will produce approximately 12 billion cubic meters in 2010. Saman-Depe along with Altyn-Asyr are considered to be the largest fields in the area. Contract area of Bagtyyarlyk is estimated at 1.7 trillion cubic metres, however the precise data is yet to be confirmed. In total, there are 17 gas and gas condensate fields on the right bank of Amu Darya:

Malai is a natural gas field located in Lebap Province of Turkmenistan, on the left bank of Amu Darya River. It has been developed since the 1970s. 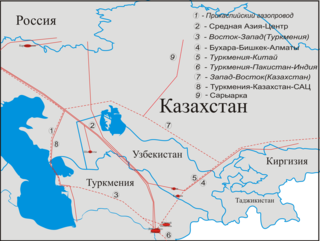 The Darvaza gas crater, also known as the Door to Hell or Gates of Hell, is a natural gas field collapsed into a cavern in Darvaza, Turkmenistan.