The Ganghwa Island incident or the Japanese Battle of Ganghwa (Korean : 운요호 사건 [雲揚號事件]Unyo-ho sageon meaning " Un'yō incident"; Japanese : 江華島 事件 Kōka-tō jiken), was an armed clash between the Joseon dynasty of Korea and Japan which occurred in the vicinity of Ganghwa Island on September 20, 1875.

In the second half of the 19th century, the Korean peninsula was the scene of a power struggle between several imperial powers including the Russians and the French, as well as the Chinese and the Japanese.

The Meiji Restoration of 1868 ended the 265-year-old feudalistic Tokugawa shogunate in Japan. The new government of Japan sent a messenger holding a letter with the sovereign's message which informed of the founding of a new administration of Japan to the government of Korea Joseon dynasty on December 19, 1868.

However, the Koreans refused to receive the letter because it contained the Chinese characters 皇 ("royal, imperial") and 勅 ("imperial decree"). [2] According to the political system of the day, only the Chinese emperor was allowed to use these characters, as they signified the imperial authority of China. [2] Hence, their use by a Japanese sovereign was considered unacceptable to the Koreans, as it implied he was an equal of the emperor of China. [2]

The Chinese suggested to the Koreans to receive the sovereign letter from Japan, because China knew the power of Japan at that moment. [3] Despite government-level negotiations held in 1875 at Pusan, no substantial progress was made. Instead, tension grew as the Koreans continued to refuse to recognize Japan's claims of equality with China.

Ganghwa Island, had been a site of violent confrontations between Korean forces and foreign forces in the previous decade. In 1866, the island was briefly occupied during the French expedition against Korea, and in 1871 the site of an American expedition. The memories of those confrontations were very fresh, and there was little question that the Korean garrison would shoot at any approaching foreign ship.

On the morning of September 20, 1875, the Un'yō under the command of Inoue Yoshika was dispatched to survey Korean coastal waters. While surveying the Western coast of Korea, the Japanese put ashore a party on Ganghwa Island to request water and provisions. [1] When the shore batteries of the Korean forts fired on the Un'yō, the Japanese response was swift and severe. [1] After bombarding the Korean fortifications, the Japanese landed a shore party that torched several houses on the island and engaged Korean troops. Armed with modern rifles, they made quick work of the Koreans who carried matchlock muskets; consequently, thirty-five Korean soldiers were killed. [1] News of the incident did not reach Tokyo until September 28, but the following day the Dajōkan decided to dispatch gun boats to Pusan to protect Japanese residents there. It also began deliberating whether or not to send a mission to Korea to settle the incident. [1]

The number of casualties of the incident were recorded at 35 of the Joseon Dynasty with two Japanese soldiers wounded. In addition, 16 Korean naval personnel were captured by Japan. Many weapons were also looted. After the incident, the Imperial Japanese Navy blockaded the immediate area and requested an official apology from the Joseon government, which was concluded with the dispatch of the Kuroda mission and the signing of the Treaty of Ganghwa on February 27, 1876, which opened the Korean Peninsula to Japanese and foreign trade.

The First Sino-Japanese War was a conflict between the Qing dynasty of China and the Empire of Japan primarily over influence in Joseon Korea. After more than six months of unbroken successes by Japanese land and naval forces and the loss of the port of Weihaiwei, the Qing government sued for peace in February 1895.

Gojong, the Emperor Gwangmu, was the last king of Joseon and the first Emperor of Korea. 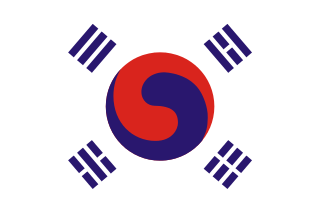 The Korean Empire was an independent unified Korean state proclaimed in October 1897 by Emperor Gojong of the Joseon Dynasty. The empire stood until Japan's annexation of Korea in August 1910. 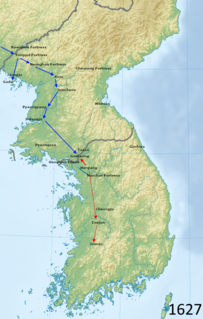 The Qing invasion of Joseon occurred in the winter of 1636 when the newly established Manchu-led Qing dynasty invaded the Joseon dynasty, establishing its status as the center of the Imperial Chinese Tributary System and formally severing Joseon's relationship with the Ming dynasty. The invasion was preceded by the Later Jin invasion of Joseon in 1627. 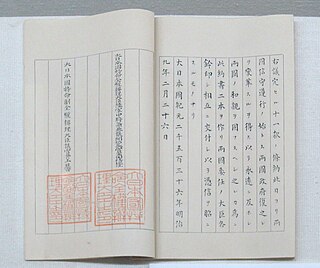 The Japan–Korea Treaty of 1876 was made between representatives of the Empire of Japan and the Korean Kingdom of Joseon in 1876. Negotiations were concluded on February 26, 1876. 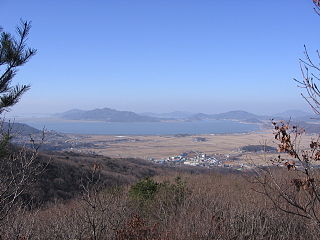 Ganghwa Island, also known by its native name Ganghwado, is a South Korean island in the estuary of the Han River. It is in the Yellow Sea, off Korea's west coast. The island is separated from Gimpo by a narrow channel spanned by two bridges, and from Kaesong (Gaeseong) in North Korea by the main channel of the Han River.

CountSoejima Taneomi was a diplomat and statesman during early Meiji period Japan. 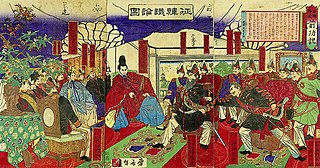 Un'yō was an iron-ribbed, wooden-hulled sail-and-steam gunboat of the early Meiji period, serving with the fledgling Imperial Japanese Navy. She was a two-masted brig with an auxiliary coal-fired steam engine driving a single screw.

The Imo Incident, also sometimes known as the Imo Mutiny, Soldier's riot or Jingo-gunran in Japan, was a violent uprising and riot in Seoul beginning on July 23, 1882 by soldiers of the Korean army who were later joined by disaffected members of the wider Korean population. The revolt broke out in part because of King Gojong's support for reform and modernization. The revolt was also in part, a reaction to Gojong's support for Japanese military advisors. Some sources credit rumors as the spark which ignited violence where many Korean soldiers were worried by the prospect of incorporating Japanese officers in a new army structure. The trigger for the riot is largely attributed to a reaction about unpaid soldiers wages, who found sand and bad rice in soldiers' rations. At the time, soldiers could be paid in rice as it was used in place of currency. 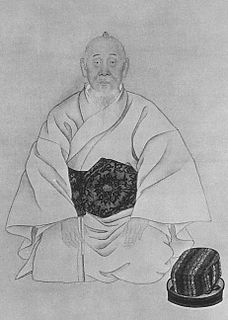 Joseon diplomacy was the foreign policy of the Joseon Dynasty of Korea from 1392 through 1910; and its theoretical and functional foundations were rooted in Neo-Confucian scholar-bureaucrats, institutions and philosophy.

The Kobe incident, also known in Japanese as the Bizen incident and in English as the Bizen affray or Bizen affair, was a diplomatic crisis between Imperial Japan and several Western powers, caused by a skirmish on February 4, 1868 between Bizen soldiers and foreign sailors. It spun into a scandal in Franco–Japanese relations, becoming the first major international affairs challenge for the fledgling Meiji government.

The History of the Imperial Japanese Navy (IJN) begins when it was first formed in 1868. The new military subsequently underwent changes as the new Meiji government became more organized, while adapting national policy with available resources. During the 1870s, failed in engage in significant expansion. This was due in part to the domestic turmoil such as peasant and samurai uprisings faced by the nascent Meiji government and financial difficulties, as acquiring a large navy was an expensive proposition. Consequently, the IJN concentrated on developing its officer corps and the training of its personnel. However, in the early 1880s, in the aftermath of the Imo Incident in 1882 and with internal threats to its security eliminated, the Meiji government undertook the first significant naval expansion in Japan's history. The IJN developed plans for the expansion of the fleet to forty-two vessels, thirty-two of which would have to be newly constructed. Between 1882 and 1884, twelve new vessels were purchased or put under construction. Spurred on by anxieties over China, Japanese military expenditures grew steadily in the 1880s. In 1880 the share of military spending had amounted to 19 percent of total government expenditures, in 1886 it had risen to 25 percent and by 1890 it stood at 31 percent.