Gaoping (Chinese :高坪; pinyin :Gāopíng) is a district of the city of Nanchong, Sichuan province, China.

One campus of North Sichuan Medical University is in the district. [2] 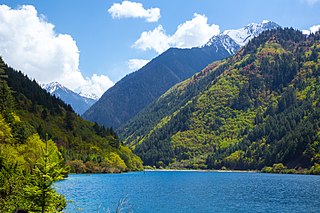 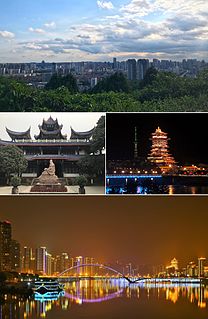 Mianyang is the second largest prefecture-level city of Sichuan province in Southwest China. Its population was 5.45 million in 2015 covering an area of 20,281 square kilometres (7,831 sq mi) consisting of Jiangyou, a county-level city, six counties and two urban districts. Its built-up area was home to 1,722,133 inhabitants including the city proper of Mianyang and An County largely being conurbated as urbanisation sprawls. In 2006, Mianyang was ranked as China's third "most suitable city for living" by China Daily, after coastal cities Dalian and Xiamen., but it has since dropped out of the top 10. 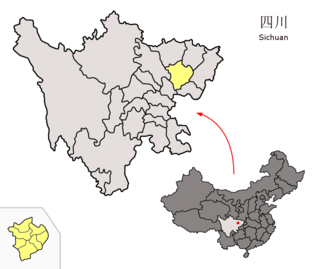 Zunyi is a prefecture-level city in northern Guizhou province, People's Republic of China, situated between the provincial capital Guiyang to the south and Chongqing to the north, also bordering Sichuan to the northwest. Along with Guiyang and Liupanshui, it is one of the most important cities of the province. The built-up area made of three urban districts of the city, Huichuan, Honghuagang, and Bozhou, had a population of 1,095,189 people; and the whole prefecture, including 14 county-level administration area as a whole, has a population of 6,127,009 at the 2010 census.

Gaoping (高平市) is a county-level city in Shanxi, China.

Nanchong Gaoping Airport is the airport serving the city of Nanchong in Sichuan province, China. 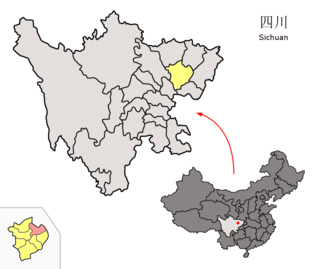 Yilong is a county in the northeast of Sichuan Province, China. It is under the administration of the prefecture-level city of Nanchong. Zhu De's Former Residence is located here. Zhu De was general and one of the pioneers of the Chinese Communist Party.

Jialing is a district of the city of Nanchong, Sichuan Province, China. 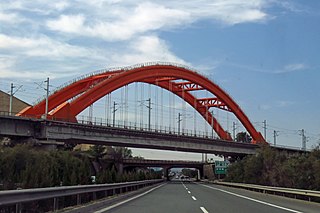 Huilong is a town of Gaoping District, Nanchong, Sichuan, People's Republic of China, situated 24 kilometres (15 mi) east-northeast of downtown Nanchong. As of 2011, it has one residential community (社区) and ten villages under its administration.

Langzhong Airport is an airport being constructed to serve the city of Langzhong in Southwest China's Sichuan Province. It is located in the town of Shilong (石龙) in Langzhong.

The 2019–20 coronavirus pandemic reached the province of Sichuan, People's Republic of China on 20 February, 2020, with its first case confirmed on the next day.