Garcilaso de la Vega, KOS (c. 1501 – 14 October 1536) was a Spanish soldier and poet. Although not the first or the only one to do so, he was the most influential poet to introduce Italian Renaissance verse forms, poetic techniques, and themes to Spain. He was well known in poetic circles during his lifetime, and his poetry has continued to be popular without interruption until the present. His poetry was published posthumously by Juan Boscán in 1543, and it has been the subject of several annotated editions, the first and most famous of which appeared in 1574.

Garcilaso was born in the Spanish city of Toledo between 1498 and 1503. [1] Clavería Boscán affirms he was born between 1487 and 1492, [2] and another sources affirms he was born in 1501. [3] His father Garcilaso de la Vega, the third son of Pedro Suárez de Figueroa, was a nobleman and ambassador in the royal court of the Catholic Monarchs. [4] His mother's name was Sancha de Guzmán. [5]

Garcilaso was the second son which meant he did not receive the mayorazgo (entitlement) to his father's estate. However, he spent his younger years receiving an extensive education, mastered five languages (Spanish, Greek, Latin, Italian and French), and learned how to play the zither, lute and the harp. When his father died in 1509, Garcilaso received a sizeable inheritance.

After his schooling, he joined the military in hopes of joining the royal guard. He was named "contino" (imperial guard) of Charles V in 1520, and he was made a member of the Order of Santiago in 1523.

There were a few women in the life of this poet. His first lover was Guiomar Carrillo, with whom he had a child. He had another suspected lover named Isabel Freire, who was a lady-in-waiting of Isabel of Portugal, but this is today regarded as mythical. [6] In 1525, Garcilaso married Elena de Zúñiga, who served as a lady-in-waiting for the King's favorite sister, Leonor. Their marriage took place in Garcilaso's hometown of Toledo in one of the family's estates. He had six children: Lorenzo, an illegitimate child with Guiomar Carrillo, Garcilaso, Íñigo de Zúñiga, Pedro de Guzmán, Sancha, and Francisco.

Garcilaso's military career meant that he took part in the numerous battles and campaigns conducted by Charles V across Europe. His duties took him to Italy, Germany, Tunisia and France. In 1532 for a short period he was exiled to a Danube island where he was the guest of the Count György Cseszneky, royal court judge of Győr. Later in France, he would fight his last battle. The King desired to take control of Marseille and eventually control of the Mediterranean Sea, but this goal was never realized. Garcilaso de la Vega died on 14 October 1536 in Nice, after suffering 25 days from an injury sustained in a battle at Le Muy. His body was first buried in the Church of St. Dominic in Nice, but two years later his wife had his body moved to the Church of San Pedro Martir in Toledo.

Garcilaso de la Vega is best known for his tragic love poetry that contrasts the playful poetry of his predecessors. He seemed to progress through three distinct episodes of his life which are reflected in his works. During his Spanish period, he wrote the majority of his eight-syllable poems; during his Italian or Petrarchan period, he wrote mostly sonnets and songs; and during his Neapolitan or classicist period, he wrote his other more classical poems, including his elegies, letters, eclogues and odes. Influenced by many Italian Renaissance poets, Garcilaso adapted the eleven-syllable line to the Spanish language in his sonetos (sonnets), mostly written in the 1520s, during his Petrarchan period. Increasing the number of syllables in the verse from eight to eleven allowed for greater flexibility. In addition to the sonetos, Garcilaso helped to introduce several other types of stanzas to the Spanish language. These include the estancia , formed by eleven- and seven-syllable lines; the "lira", formed by three seven-syllable and two eleven-syllable lines; and endecasílabos sueltos, formed by unrhymed eleven-syllable lines.

Throughout his life, Garcilaso de la Vega wrote various poems in each of these types. His works include: forty Sonetos (Sonnets), five Canciones (Songs), eight Coplas (Couplets), three Églogas (Eclogues), two Elegías (Elegies), and the Epístola a Boscán (Letter to Boscán). Allusions to classical myths and Greco-Latin figures, great musicality, alliteration, rhythm and an absence of religion characterize his poetry. It can be said that Spanish poetry was never the same after Garcilaso de la Vega. His works have influenced the majority of subsequent Spanish poets, including other major authors of the period like Jorge de Montemor, Luis de León, John of the Cross, Miguel de Cervantes, Lope de Vega, Luis de Góngora and Francisco Quevedo.

He was very good at transmitting the sense of life into writing, in many poems including his «dolorido sentir»:

We see the shift in traditional belief of Heaven as influenced by the Renaissance, which is called "neo-Platonism," which tried to lift love to a spiritual, idealistic plane, as compared to the traditional Catholic view of Heaven. (Égloga primera):

He has enjoyed a revival of influence among 21st century pastoral poets such as Seamus Heaney, Dennis Nurkse, and Giannina Braschi.

Garcilaso is mentioned in multiple works by Miguel de Cervantes. In the second volume of Don Quixote, the protagonist quotes one of the poet's sonnets. [7] In El licenciado Vidriera, Tomás Rodaja carries a volume of Garcilaso on his journey across Europe.

The title of Pedro Salinas's sequence of poems La voz a ti debida is taken from Garcilaso's third eclogue.

In the novel Of Love and Other Demons by Gabriel García Márquez, one of the main characters, Father Cayetano Delaura, is an admirer of Garcilaso de la Vega. In the novel, which takes place in 18th-century colonial Colombia, Delaura is forced to give up being a priest because of his tragic love affair.

Puerto Rican poet Giannina Braschi wrote both a poetic treatise on Garcilaso de la Vega's Eclogues, as well as a book of poems in homage to the Spanish master, entitled Empire of Dreams.

Vicente Pío Marcelino Cirilo Aleixandre y Merlo was a Spanish poet who was born in Seville. Aleixandre received the Nobel Prize for Literature in 1977 "for a creative poetic writing which illuminates man's condition in the cosmos and in present-day society, at the same time representing the great renewal of the traditions of Spanish poetry between the wars". He was part of the Generation of '27. 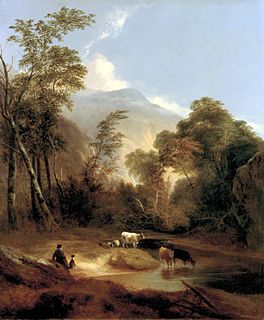 A pastoral lifestyle is that of shepherds herding livestock around open areas of land according to seasons and the changing availability of water and pasture. It lends its name to a genre of literature, art, and music that depicts such life in an idealized manner, typically for urban audiences. A pastoral is a work of this genre, also known as bucolic, from the Greek βουκολικόν, from βουκόλος, meaning a cowherd.

Luis de Góngora y Argote was a Spanish Baroque lyric poet. Góngora and his lifelong rival, Francisco de Quevedo, are widely considered the most prominent Spanish poets of all time. His style is characterized by what was called culteranismo, also known as Gongorismo. This style existed in stark contrast to Quevedo's conceptismo.

Francisco Gómez de Quevedo y Santibáñez Villegas, KOS was a Spanish nobleman, politician and writer of the Baroque era. Along with his lifelong rival, Luis de Góngora, Quevedo was one of the most prominent Spanish poets of the age. His style is characterized by what was called conceptismo. This style existed in stark contrast to Góngora's culteranismo.

An eclogue is a poem in a classical style on a pastoral subject. Poems in the genre are sometimes also called bucolics.

Juan Ramón Jiménez Mantecón was a Spanish poet, a prolific writer who received the Nobel Prize in Literature in 1956 "for his lyrical poetry, which in the Spanish language constitutes an example of high spirit and artistic purity". One of Jimenez's most important contributions to modern poetry was his advocacy of the concept of "pure poetry."

Francisco de Sá de Miranda was a Portuguese poet of the Renaissance. 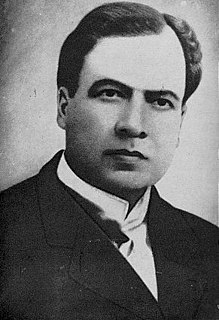 Félix Rubén García Sarmiento, known as Rubén Darío, was a Nicaraguan poet who initiated the Spanish-American literary movement known as modernismo (modernism) that flourished at the end of the 19th century. Darío has had a great and lasting influence on 20th-century Spanish literature and journalism. He has been praised as the "Prince of Castilian Letters" and undisputed father of the modernismo literary movement.

Rafael Alberti Merello was a Spanish poet, a member of the Generation of '27. He is considered one of the greatest literary figures of the so-called Silver Age of Spanish Literature, and he won numerous prizes and awards. He died aged 96. After the Spanish Civil War, he went into exile because of his Marxist beliefs. On his return to Spain after the death of Franco, he was named Hijo Predilecto de Andalucía in 1983 and Doctor Honoris Causa by the Universidad de Cádiz in 1985. 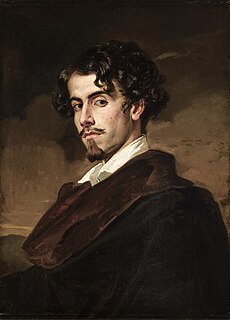 Gustavo Adolfo Claudio Domínguez Bastida, better known as Gustavo Adolfo Bécquer, was a Spanish Romanticist poet and writer, also a playwright, literary columnist, and talented in drawing. Today he is considered one of the most important figures in Spanish literature, and is considered by some as the most read writer after Miguel de Cervantes. He adopted the alias of Bécquer as his brother Valeriano Bécquer, a painter, had done earlier. He was associated with the romanticism and post-romanticism movements and wrote while realism was enjoying success in Spain. He was moderately well known during his life, but it was after his death that most of his works were published. His best known works are the Rhymes and the Legends, usually published together as Rimas y leyendas. These poems and tales are essential to the study of Spanish literature and common reading for high-school students in Spanish-speaking countries.

This article concerns poetry in the Spanish language.

Puerto Rican literature evolved from the art of oral storytelling to its present-day status. Written works by the native islanders of Puerto Rico were prohibited and repressed by the Spanish colonial government. Only those who were commissioned by the Spanish Crown to document the chronological history of the island were allowed to write. 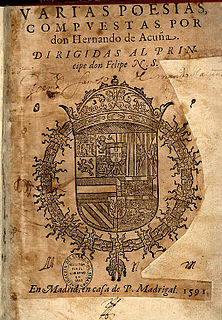 Hernando de Acuña, a native of Valladolid, was a Spanish poet and translator of the Spanish Golden Age. He was admired by Emperor Charles V for both his military and literary talents.

Giannina Braschi is a Puerto Rican poet, novelist, dramatist, and scholar. Her notable works include Empire of Dreams (1988), Yo-Yo Boing! (1998) and United States of Banana (2011).

Empire of Dreams is a postmodern poetry epic by Puerto Rican author Giannina Braschi, who is considered "one of the most revolutionary voices in Latin American literature today".

Cayetano María Huarte Ruiz de Briviesca was a Spanish writer and poet. He was born in Cádiz in 1741 and died in 1806.