The Gare de l'Est (pronounced [ ɡ a ʁ   d ə   l ˈ ɛ s t ] , Station of the East), officially Paris-Est, is one of the six large SNCF termini in Paris. It is in the 10th arrondissement, not far from the Gare du Nord, facing the Boulevard de Strasbourg, part of the north-south axis of Paris created by Georges-Eugène Haussmann. It is one of the largest and the oldest railway stations in Paris, the western terminus of the Paris–Strasbourg railway and the Paris–Mulhouse railway which then proceeds to Basel, Switzerland.

The Gare de l'Est was opened in 1849 by the Compagnie du Chemin de Fer de Paris à Strasbourg (Paris–Strasbourg Railway Company) under the name "Strasbourg platform" (Embarcadère de Strasbourg); an official inauguration with President Louis Napoléon Bonaparte took place the next year. The platform corresponds today with the hall for main-line trains. Designed by architect François Duquesnay, it was renamed the "Gare de l'Est" in 1854, after the expansion of service to Mulhouse.

Renovations followed in 1885 and 1900, part of Haussmann's renovation of Paris. In 1931 it was doubled in size, with the new part of the station built symmetrically with the old part. This transformation changed the surrounding neighbourhood significantly. At the top of the west facade of the Gare de l'Est is a statue by the sculptor Philippe Joseph Henri Lemaire, representing the city of Strasbourg, while the east end of the station is crowned by a statue personifying Verdun, by Varenne. These two cities are important destinations serviced by Gare de l'Est. On 4 October 1883, the Gare de l'Est saw the first departure of the Orient Express for Istanbul.

The Gare de l'Est is the terminus of a strategic railway network extending towards the eastern part of France, and it saw large mobilizations of French troops, most notably in 1914, at the beginning of World War I. In the main-line train hall, a monumental painting by Albert Herter, Le Départ des poilus, août 1914 dating from 1926, illustrates the departure of these soldiers for the Western front. The SNCF started LGV Est Européenne services from the Gare de l'Est on 10 June 2007, with TGV and Intercity-Express (ICE) services to Northeastern France, Luxembourg, Southern Germany and Switzerland. Trains are initially planned to run at 320 km/h (198 mph), with the potential to run at 350 km/h (217 mph), cutting travel times by up to 2 hours. 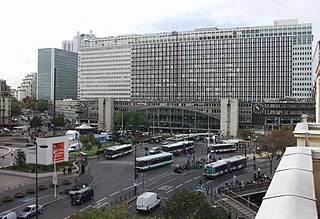 Gare Montparnasse, officially Paris-Montparnasse, is one of the six large Paris railway termini, and is located in the 14th and 15th arrondissements of Paris. 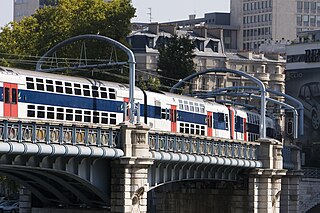 The Réseau Express Régional, commonly abbreviated RER, is a hybrid suburban commuter and rapid transit system serving Paris and its suburbs. The RER combines the operations and roles of a local city-centre underground rail system and suburbs-to-city-centre commuter rail. Inside the city centre, the RER functions much like the Métro, although it is faster, as it has fewer stops. This has made it a model for proposals to improve transit within other cities.

The Gare de Lyon, officially Paris-Gare-de-Lyon, is one of the six large mainline railway station termini in Paris, France. It handles about 90,000,000 passengers every year, making it the third busiest station of France and one of the busiest of Europe. It is the northern terminus of the Paris–Marseille railway. It is named after the city of Lyon, a stop for many long-distance trains departing here, most en route to the south of France. The station is in the XIIe arrondissement, on the north bank of the river Seine, in the east of Paris.

The Gare du Nord, officially Paris-Nord, is one of the six large terminus stations of the SNCF mainline network for Paris, France. It serves train services toward regions north of Paris, along the Paris–Lille railway. Near Gare de l'Est in the 10th arrondissement, the Gare du Nord offers connections with several urban transport lines, including Paris Métro, RER and buses. By the number of travelers, around 222 million per year, it is the busiest railway station in Europe by total passenger numbers.

Magenta is a station of the Île-de-France Réseau Express Régional, in the 10th arrondissement of Paris, France. Built on the site of the Gare du Nord, the original name of Magenta station was Nord-Est with the possibility of a connection to both Paris-Nord and Paris-Est. 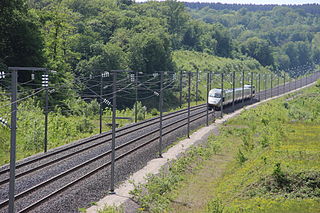 The Ligne à Grande Vitesse Est européenne, typically shortened to LGV Est, is a French high-speed rail line that connects Vaires-sur-Marne and Vendenheim. The line halved the travel time between Paris and Strasbourg and provides fast services between Paris and the principal cities of eastern France as well as Luxembourg, Germany, and Switzerland. The LGV Est is a segment of the Main line for Europe project to connect Paris with Budapest with high-speed rail service. 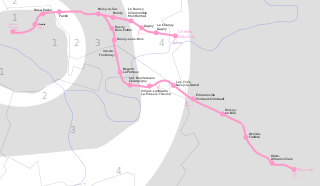 RER E is one of the five lines in the Réseau Express Régional, a hybrid suburban commuter/rapid transit system serving Paris, France and its suburbs. The 52.3 km (32.5 mi) RER E line travels between Paris and eastern suburbs, with all trains serving the stations in central Paris, before branching out towards the ends of the line.

Transilien is the SNCF Mobilités suburban rail network serving mainly Île-de-France train stations. "Transilien" is a derivative of Francilien, the demonym for people living in Île-de-France. The area covered does not correspond exactly with the administrative boundaries of the region, as the trains also serve several stations located in Normandy, Hauts-de-France and Centre-Val de Loire. On the other hand, some stations located at the margins of the region are not served by the network, but only by regional express trains (TER) from neighboring regions. Transilien is the successor to suburban trains that existed since the late nineteenth century. 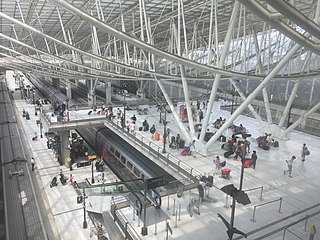 Aéroport Charles de Gaulle 2 TGV station is a major passenger railway station in Tremblay-en-France, France. It is directly beneath terminal two of Paris Charles de Gaulle Airport and is operated by the SNCF. The station opened in 1994. It connects the airport to Paris and to various others cities in France, as well as to Belgium.

AREP is a multidisciplinary consultancy that is wholly owned by SNCF. It was formed in 1997 by Jean-Marie Duthilleul and Étienne Tricaud, architects and engineers. It has 600 staff from around 15 countries, including town planners, architects, engineers, economists, technicians, designers, and project managers. 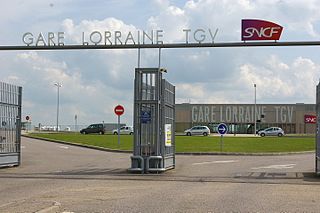 Lorraine TGV station is a railway station located in Louvigny, France, on the LGV Est, a high-speed rail line running from Paris to Strasbourg. Opened in 2007 as part of the first phase of the new line, it is situated near Metz–Nancy–Lorraine Airport, between the cities of Metz and Nancy. As the two other new LGV Est stations it is served by TGV inOui and Ouigo services.

Pantin is a railway station in Pantin, Seine-Saint-Denis, France. It opened in 1864 on the Paris–Strasbourg railway and Paris–Mulhouse railway. Since 1999, Pantin station is served by RER line E trains operated by SNCF.

Mantes-la-Jolie is a railway station in the town Mantes-la-Jolie, Yvelines department, northwestern France. It is on the Paris–Le Havre railway at the point where the line to Caen and Cherbourg diverges.

Meaux is a railway station serving Meaux, Seine-et-Marne department, northern France. It is on the Paris–Strasbourg railway, and offers connections to Paris-Est, Château-Thierry and La Ferté-Milon. 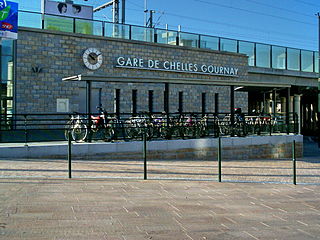 Chelles–Gournay is a railway station in Chelles, Seine-et-Marne, France. The station opened in 1849 and is on the Paris-Est–Strasbourg-Ville railway. The station is served by Transilien line P and RER Line E services operated by the SNCF.

The railway from Paris-Est to Strasbourg-Ville is a 493-kilometre long railway line that connects Paris to Strasbourg via Châlons-en-Champagne and Nancy, France. Officially, the line does not start at the Gare de l'Est in Paris: the first 9 km until Noisy-le-Sec is shared with the railway from Paris to Mulhouse. The railway was opened in several stages between 1849 and 1852. The opening of the LGV Est high speed line from Paris to Baudrecourt in Lorraine in 2007 has decreased the importance of the section Paris–Sarrebourg for passenger traffic.

Rosa-Parks is a railway station in the 19th arrondissement of Paris, France near the Porte d'Aubervilliers. It opened on 13 December 2015. It bears the name of American civil rights activist Rosa Parks.

Émerainville–Pontault-Combault is a French railway station on the Paris-Est–Mulhouse-Ville railway, located in Émerainville, Seine-et-Marne département, Ile-de-France region. It bears the name of Pontault-Combault commune as its territory reaches the south and the west of the building. It serves a district of Marne-la-Vallée.