The Gasteig is planned to be restored until 2027. A provisional house for many of its functions is Gasteig HP8.

The Philharmonic Hall, opening like a great wood-panelled seashell, has an intimate atmosphere but poor acoustic qualities. [1] The smaller hall "Kleiner Konzertsaal" offers slightly better acoustics for chamber music. The Gasteig comprises the Carl Orff Hall with a stage for drama, the Richard Strauss Conservatory, the Black Box studio theatre, the Münchner Volkshochschule (Adult Education Centre) for further education, various cafés and shops, e.g. the 'Pappnase' (cardboard nose) offering a selection of dramatic requisites, and the central branch of the Municipal Library with its extensive stock of books and periodicals.

When famed conductor Leonard Bernstein was asked on his opinion of the hall, he remarked, "Burn it." [2]

History of the site

The estate behind the Gasteig was until its demolition in 1979 the location of the Bürgerbräukeller, stage for the 1923 Beer Hall Putsch and the 1939 Hitler assassination attempt by Georg Elser. A showcase visible from outside of the Gasteig commemorates Elser's history.

The Berliner Philharmonie is a concert hall in Berlin, Germany, and home to the Berlin Philharmonic Orchestra. 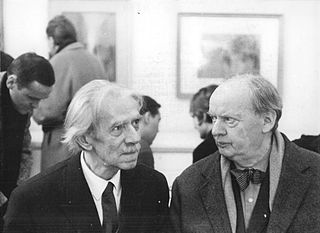 Bernhard Hans Henry Scharoun was a German architect best known for designing the Berliner Philharmonie and the Schminke House in Löbau, Saxony. He was an important exponent of organic and expressionist architecture.

The University of Music and Performing Arts Munich, also known as the Munich Conservatory, is a performing arts conservatory in Munich, Germany. The main building it currently occupies is the former Führerbau of the NSDAP, located at Arcisstraße 12, on the eastern side of the Königsplatz. Teaching and other events also take place at Luisenstraße 37a, Gasteig, the Prinzregententheater, and in Wilhelmstraße (ballet). Since 2008, the Richard Strauss Conservatory, until then independent, has formed part of the university. 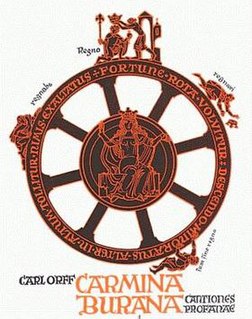 Carmina Burana is a cantata composed in 1935 and 1936 by Carl Orff, based on 24 poems from the medieval collection Carmina Burana. Its full Latin title is Carmina Burana: Cantiones profanae cantoribus et choris cantandae comitantibus instrumentis atque imaginibus magicis. It was first performed by the Oper Frankfurt on 8 June 1937. It is part of Trionfi, a musical triptych that also includes Catulli Carmina and Trionfo di Afrodite. The first and last sections of the piece are called "Fortuna Imperatrix Mundi" and start with "O Fortuna".

The Philharmonie Luxembourg, also known officially as the Grande-Duchesse Joséphine-Charlotte Concert Hall, is a concert hall located in the European district in the Luxembourg City quarter of Kirchberg. Opened in 2005, it now plays host to 400 performances each year. 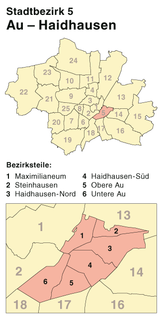 Au-Haidhausen is the 5th borough of the German city of Munich, Bavaria. It is formed by the Au and Haidhausen districts.

The Hochschule für Musik Carl Maria von Weber is a university of music in Dresden, Germany.

Rodrigo Orrego was born in Santiago de Chile. He studied musical history and voice at the Universidad Católica de Chile and graduated afterwards with Prof. Aldo Baldin at the Musikhochschule Karlsruhe, Germany.

Miku Nishimoto-Neubert is a classical pianist.

Taschenphilharmonie is a German orchestra, founded in 2005 by Peter Stangel. The chamber ensemble plays symphonic works in three series, with most concerts held at the Allerheiligen-Hofkirche of the Munich Residenz. In addition to concerts which juxtapose classical and contemporary music, they address children in a second series and listeners interested in the making of a composition in a third. The ensemble styles its name die taschenphilharmonie.

Saalbau Essen is a concert venue in Essen, Germany, the home of the Essen Philharmonic. The original building was completed in 1902, and destroyed during World War II on 26 July 1943. It was rebuilt between 1949 and 1954 and completely renovated in 2003 and 2004. The Saalbau Essen is located a little bit south of the city center close to the Aalto Theatre. Since the 2013/2014 season Tomáš Netopil has been the music director of Essener Philharmonic. Also since 2013/2014 Hein Mulders has been the intendant of the Saalbau Essen. Marcel Cordes was a German baritone in opera and concert. He was regarded as a leading baritone of German origin for Italian opera in the 1950s and 1960s. He appeared at major opera houses in Europe, and made recordings of complete operas and excerpts, including in 1956 the first complete recording of Carl Orff's Die Kluge. 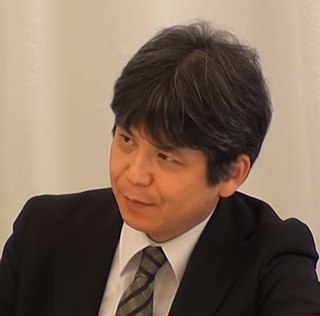 Vision of Lear is the first opera by Toshio Hosokawa which premiered at the Munich Biennale in 1998. The opera in two acts is an adaptation of Shakespeare's King Lear, including elements from the traditional Japanese Noh theatre. The libretto was written in English by Tadashi Suzuki. 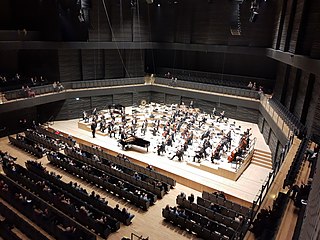 Gasteig HP8 is a culture centre in Munich, Bavaria, Germany, in the Sendling district. It is a provisional location, replacing the functions of the Gasteig in Haidhausen while it is under restoration planned to 2027. Gasteig HP8 opened on October 8, 2021. It houses the Isarphilharmonie concert hall and the Münchner Stadtbibliothek library in Hall E, a listed historic monument.

Wikimedia Commons has media related to Gasteig .
This page is based on this Wikipedia article
Text is available under the CC BY-SA 4.0 license; additional terms may apply.
Images, videos and audio are available under their respective licenses.