Gaston Baty (26 May 1885 in Pélussin, Loire – 13 October 1952), whose full name was Jean-Baptiste-Marie-Gaston Baty, was a French playwright and theatre director. His stage adaptation of Gustave Flaubert's Madame Bovary was presented in an English translation on Broadway in 1937. Constance Cummings played the title role. [1] Baty is also the author of a play entitled Dulcinea, which has been filmed twice and produced on television in 1989. It is an original play that takes its inspiration from Miguel de Cervantes's great novel Don Quixote and uses some of its characters. The second film version, made in 1963, starred Millie Perkins as Dulcinea, and was released in the U.S. as The Girl from La Mancha. He wrote Vie de l'art théatral, des origines a nos jours in 1932 with René Chavance.

Denis d'Inès, real name Joseph-Victor-Octave Denis, was a French actor and theatre director for some plays.. He entered the Comédie-Française in 1914, was a sociétaire from 1920 to 1953, and General administrator by intérim in 1945. 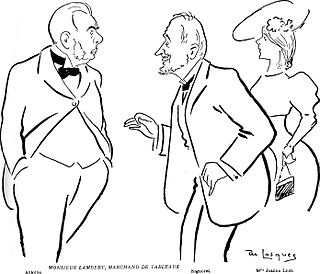