The Gau Highlands Important Bird Area is an area covering the entire forested interior (just over 50% of the entire island) and measures 5,200 hectares (13,000 acres). It contains populations of the critically endangered Fiji petrel, and vulnerable shy ground-dove and collared petrel. [1] The Fiji petrel's nesting habitat on the island contributes to its national significance as outlined in Fiji's Biodiversity Strategy and Action Plan. [2]

It has one airstrip at Lovu, on the southern tip of the island, which receives planes from Nausori International Airport. There are 16 villages on the island: Yadua, Vadra Vadra, Lovu, Levuka-i-Gau, Nukuloa, Nawaikama, Somosomo, Sawaeke (the chiefly village), Navukailagi, Qarani, Vione, Lekanai, Vanuaso, Nacavanadi, Malawai and Lamiti. There is one Secondary School on the island in Nawaikama, which also hosts hot springs nearby. Gau Island is widely regarded as one of the best Kava (Yaqona) strains in Fiji.

A marine research facility was established on Naviavia beach on the western coast of Gau in 2005 by the UK-based non-governmental organization Frontier, commissioned by Dr. Joeli Veitayaki of the University of South Pacific, a native of Malawai on the eastern coast.

Rugby sevens former player-coach of the Fijian national Sevens Team Waisale Serevi is a native of Qarani, a large village to the northwest, which also contains a post office and nursing station.

The first King of Fiji Seru Epenisa Cakobau grew up on the island, despite being born on the nearby island Narai.

Kadavu, with an area of 411 square kilometres (159 sq mi), is the fourth largest island in Fiji, and the largest island in the Kadavu Group, a volcanic archipelago consisting of Kadavu, Ono, Galoa and a number of smaller islands in the Great Astrolabe Reef. Its main administrative centre is Vunisea, which has an airport, a high school, a hospital, and a government station, on the Namalata Isthmus where the island is almost cut in two. Suva, Fiji's capital, lies 88 kilometres to the north of Kadavu. The population of the island province was 10,167 at the most recent census in 2007.

Taveuni is the third-largest island in Fiji, after Viti Levu and Vanua Levu, with a total land area of 434 square kilometres. The cigar-shaped island, a massive shield volcano which rises from the floor of the Pacific Ocean, is situated 6.5 kilometres to the east of Vanua Levu, across the Somosomo Strait. It belongs to the Vanua Levu Group of islands and is part of Fiji's Cakaudrove Province within the Northern Division.

The Lomaiviti archipelago of Fiji consists of seven main islands and a number of smaller ones. They cover a total area of 411 square kilometres (159 sq mi), and had a population of 16,461 at the most recent census in 2007. The largest town, with a population of 3,745 in 1996, is Levuka, which was Fiji's first modern town and served as the capital from 1871 to 1877.

Wakaya is a privately owned island in Fiji's Lomaiviti Archipelago. Situated at 17.65° South and 179.02° East, it covers an area of eight square kilometres. It is 18 kilometres from Ovalau, the main island in the Lomaiviti Group.

Namena Lala is a volcanic islet in Fiji, an outlier to the northern island of Vanua Levu, 24 kilometres (15 mi) away. Situated at 17.11° South and 179.10° East, it covers an area of 4 square kilometres. Its maximum altitude is 105 metres (340 ft). The island is the site of the 0.44 square kilometres Moody's Namenalala Island resort and nature reserve.

Moala is a volcanic island in the Moala subgroup of Fiji's Lau archipelago. It has an area of 62.5 square kilometers (24.1 sq mi), making it the ninth largest island of Fiji. The highest point on the island of Moala, at a maximum elevation of 468 meters (1,535 ft), is called Delaimoala which has rich vegetation and consists of dark thick forest. The population of around 3000 live in eight villages. The chiefly village of these is Naroi, whose population is over 500. Economic activities include coconut farming, cocoa production, fishing and yaqona (kava) production.

The Ringgold Isles are an archipelago in Fiji, forming an outlier group to Vanua Levu. The Budd, Nukusemanu, and Heemskercq Reefs form part of the group. The group is mostly uninhabited, but Qelelevu has a small village. In 2008 Pacific Rats were eradicated from seven islands of the group in an endeavour facilitated by BirdLife International's Fiji Programme. 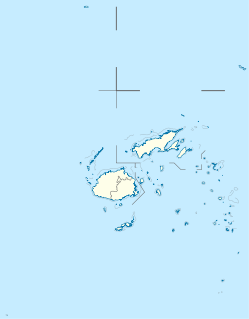 Qelelevu is a coral islet in Fiji, a member of the Ringgold Isles archipelago, which forms an outlier to the northern island of Vanua Levu. Apart from two nearby coral islets, Tai Ni Beka and Tauraria due west on the same atoll rim, it is 30 kilometres (19 mi) from the nearest island, which is Vetauua, to the West. Qelelevu covers an area of 1.5 square kilometers. Its maximum elevation is 12 metres (39 ft). 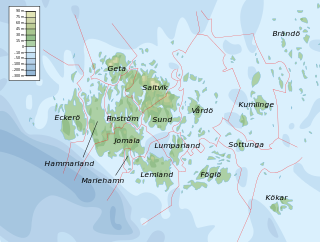 The Åland archipelago consists of nearly three hundred inhabitable islands, of which about sixty are inhabited; the remainder are some 6,400 skerries and desolate rocks. The archipelago is connected to Turku archipelago in the east — the archipelago adjacent to the southwest coast of Finland.

Batiki is an island of Fiji belonging to the Lomaiviti Archipelago. The island is of volcanic origin, with a land area of about 12 square kilometers. Its latitude is 17° 47' S; its longitude is 179° 9' W.

Samhah or Samha is an inhabited island in the Guardafui Channel. A part of the Socotra archipelago, it is located between the island of Socotra and Somalia. Like the whole group, it belongs to Yemen, and is part of Socotra Governorate. There is a dispute between Yemen and Somalia's government over the island's sovereignty. 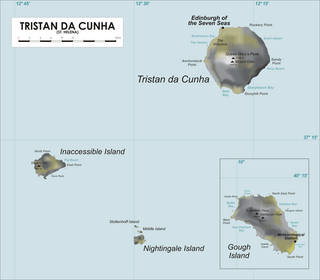 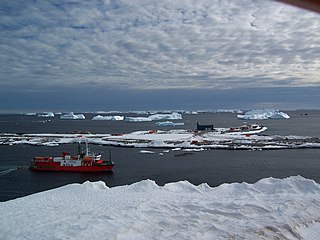 Nabukelevu is a volcano located on the southwest portion of Kadavu Island in Fiji. It is 805 metres (2,641 ft) tall, and last erupted around 1660. It has formed lava domes

Baixo Islet, also known locally as Ilhéu do Carapacho and historically as Ilhéu dos Homiziados, is a small uninhabited islet group located off the southeast coast of the island of Graciosa in the Portuguese archipelago of the Azores. Along with Praia Islet to its north, Baixo Islet is one of two main breeding places of Monteiro's storm petrel, an endemic marine bird of the Azores.