Gediminas Kirkilas ( pronunciation  (help·info), born 30 August 1951) is a Lithuanian politician who was Prime Minister of Lithuania from 2006 to 2008. He was confirmed by the Seimas on 4 July 2006 after Zigmantas Balčytis, the provisional Prime Minister, failed to gather the required support from the parliament. [1] He stepped down on 27 November 2008 after the 2008 parliamentary elections, and gave way to Andrius Kubilius to start his term as the prime minister.

Kirkilas was born in Vilnius in 1951. After returning from mandatory military service, from 1972 to 1978 he worked on several cultural monuments (e.g. churches or the Verkiai Palace) restoring their interior and especially rolled gold and molding. In 1978–1982 he studied political science. After graduation, he joined the Communist Party of Lithuania and took various posts there. When Algirdas Brazauskas was appointed the secretary of the party, Kirkilas became his press secretary.

In 2004, he received an MBA from the International Business School in Vilnius.

In January 2007 he was praised in The Economist as an unsung hero whose "minority administration has surpassed all expectations". [2]

In July 2007, Kirkilas signed the protocol assigning the members of newly formed governmental work group to assist the energy company „Lietuvos energija“ in negotiating and consulting with potential foreign partners for a new Ignalina nuclear power plant project. A public turmoil followed after the name of Darius Jurgelevičius  [ lt ] occurred in the list of the work group. After the so-called State Security Departament scandal in 2006, when a senior officer Vytautas Pociūnas died under controversial circumstances in a hotel in Belarus, the witnesses described Darius Jurgelevičius as a middleman transmitting then Lithuanian Foreign Ministry's clerk Albinas Januška's influence to State Security Departament. Albinas Januška currently works as G. Kirkilas's advisor. [3]

In July 2007, before handing his powers to his successors, Vidmantas Jankauskas  [ lt ] the chairman of the State Price and Energy Control Commission spoke about the ties between gas companies and the Prime Minister Kirkilas, saying: "a gas company „Lietuvos dujos“ is privately lobbying G. Kirkilas and the second Lithuanian monopolist gas company Dujotekana  [ lt ] – Ministry of Economics. CEO of Lietuvos dujos, Viktoras Valentukevičius, meets Kirkilas privately to play tennis". [3]

In October 2014, Fair Observer featured an interview with Kirkilas where he spoke on his pro-nuclear energy stance. [4]

The Prime Minister of Lithuania is the head of the Government of Lithuania. The prime minister is Lithuania's head of government and is appointed by the President with the assent of the Lithuanian parliament, the Seimas. The modern office of Prime Minister was established in 1990, during the turmoil surrounding the Soviet Union's collapse, although the official title was "Chairperson of the Council of Ministers" until 25 November 1992.

Andrius Kubilius is a Lithuanian politician and a Member of the European Parliament (MEP). He served as Prime Minister of Lithuania from 1999 to 2000 and again from 2008 to 2012. He was leader of the conservative political party Homeland Union – Lithuanian Christian Democrats.

Laurynas Mindaugas Stankevičius was a Lithuanian economist and politician who served as the 7th Prime Minister of Lithuania from February to November 1996. He previously served as the Minister of Social Security and Labour from 1993 to 1994, and after being prime minister, was a member of the Seimas from 1996 to 1998, and later Minister of Health from 1998 to 1999. Formerly a member of the Communist Party of Lithuania, following independence he joined the newly formed Democratic Labour Party.

AB Lietuvos dujos was a natural gas company in Lithuania. It was established in 1961 as an integrated gas company for import, transmission, distribution and sales of natural gas. After privatization in 1990s, its major shareholders became Gazprom and E.ON Ruhrgas. In 2013, its transmission business was spin-off into a separate company Amber Grid. In 2014, Gazprom and E.ON sold their stakes to the state-owned energy company Lietuvos Energija. On 1 January 2016, Lietuvos Dujos was merged into Energijos Skirstymo Operatorius.

LEO LT AB or Lithuanian Electricity Organization was a national energy holding company in Lithuania. The company owned shares of Lithuania's three major electric power production and distribution companies. It was established in early 2008 to raise funds for the construction of the planned Visaginas Nuclear Power Plant after close down of Ignalina Plant, and Lithuania–Sweden and Lithuania–Poland power connections. The decision to liquidate the company, mired in controversies and attacked by critics, was reached by the shareholder of LEO LT on 4 September 2009.

Government of the Republic of Lithuania is the cabinet of Lithuania, exercising executive power in the country. Among other responsibilities, it executes laws and resolutions of the parliament, the Seimas, and the decrees of the President, manages state property and, together with the President, executes the foreign policy of the country. The Government also has the right of legislative initiative, puts together the state budget and presents it to the Seimas for approval.

Butkevičius Cabinet was the 16th cabinet of Lithuania since 1990. It consisted of the Prime Minister, who was the Head of Government, and 14 government ministers from the Social Democratic Party of Lithuania, the Labour Party, the Order and Justice, and the Electoral Action of Poles in Lithuania.

Energijos Skirstymo Operatorius AB (ESO) is an electricity and gas distribution company in Lithuania. It was established on 1 January 2016 through merger of the Lithuanian electricity distribution network operator LESTO AB and a gas company Lietuvos dujos. ESO is controlled by a state-owned group of energy companies Lietuvos Energija which owns 94.98% of shares. Its shares are traded on NASDAQ OMX Vilnius. 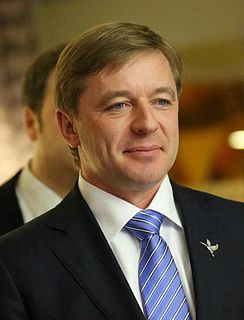 Parliamentary elections were held in Lithuania on 9 October 2016, with a second round held on 23 October in the constituencies where no candidate won a majority in the first round of voting. All 141 seats in the Seimas were up for election; 71 in single-member constituencies elected by majority vote and the remaining 70 in a nationwide constituency based on proportional representation.

Gediminas Černiauskas is a Lithuanian economist and politician, and, for a brief time in 2008, the Lithuanian Health Minister in the government of Gediminas Kirkilas.

Kirkilas Cabinet was the 14th cabinet of Lithuania since 1990. It consisted of the Prime Minister and 13 government ministers.

The Second Brazauskas Cabinet was the 13th cabinet of Lithuania since 1990. It consisted of the Prime Minister and 13 government ministers.

The First Brazauskas Cabinet was the 12th cabinet of Lithuania since 1990. It consisted of the Prime Minister and 13 government ministers.

The Second Paksas Cabinet was the 11th cabinet of Lithuania since 1990. It consisted of the Prime Minister and 13 government ministers.

The Second Vagnorius Cabinet was the 8th cabinet of Lithuania since 1990. It consisted of the Prime Minister and 17 government ministers.

Saulius Skvernelis is a Lithuanian politician who has been Prime Minister of Lithuania since 2016. He is also a member of the Seimas. Previously he served as police commissioner, and he was Minister of the Interior from 2014 to 2016.