Last updated May 04, 2021
For other uses, see Gemeinde (disambiguation).

In theological usage, the German word Gemeinde (ɡəˈmaɪndə; plural: Gemeinden) refers to a group of people attached to a specific house of worship, usually a church building or a synagogue. The word can be used to mean a parish assembly, in the sense of a group of people physically present for a service or other function, or be used in the sense of the Greek term koinonia , a general fellowship of believers. In these senses, the word has no direct English equivalent except among Mormons, who call it a ward.

Among the Amish, the word can also refer to the Amish community, interpreted as a corporate body politic, as a whole. [1]

In terms of Jewish communities, the word can refer to the community level of Jewish life, as established in pre-World War II Germany. [2]

The term Judeo-Christian is used to group Christianity and Judaism together, either in reference to Christianity's derivation from Judaism, both religions' common use of the Bible, or due to perceived parallels or commonalities and shared values between the two religions. 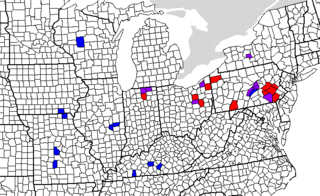 Pennsylvania German, usually referred to as Pennsylvania Dutch, is a variety of West Central German spoken by the Old Order Amish, Old Order Mennonites and other descendants of German immigrants in the United States and Canada, closely related to the Palatine dialects. There are possibly more than 300,000 native speakers in the United States and Canada. In Pennsylvania, 29.9% of the population currently claim German ancestry. 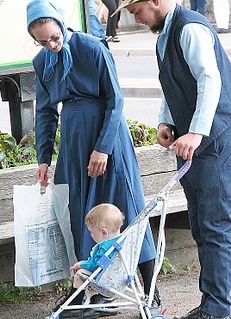 Plain people are Christian groups characterized by separation from the world and by simple living, including plain dressing in modest clothing. Many Plain people have an Anabaptist background. These denominations are largely of German, Swiss German, Dutch or other European ancestry. Conservative Friends are traditional Quakers who are also considered plain people; they come from a variety of different ethnic backgrounds. 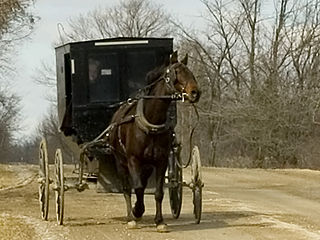 Old Order Mennonites form a branch of the Mennonite tradition. Old Order are those Mennonite groups of Swiss German and south German heritage who practice a lifestyle without some elements of modern technology, who dress plainly and who have retained the old forms of worship, baptism and communion.

Rumspringa, also spelled Rumschpringe or Rumshpringa, is a rite of passage during adolescence, translated in English as "jumping or hopping around," used in some Amish communities. The Amish, a subsect of the Anabaptist Christian movement, intentionally segregate themselves from other communities as a part of their faith. For Amish youth, the Rumspringa normally begins around the ages of 14–16 and ends when a youth chooses either to be baptized in the Amish church or to leave the community. For Wenger Mennonites, Rumspringa occurs between ages of 17 and 21.

The Ordnung is a set of rules for Amish, Old Order Mennonite and Conservative Mennonite living. Ordnung is the German word for order, discipline, rule, arrangement, organization, or system. Because the Amish have no central church government, each assembly is autonomous and is its own governing authority. Thus, every local church maintains an individual set of rules, adhering to its own Ordnung, which may vary from district to district as each community administers its own guidelines. These rules are largely unwritten, yet they define the very essence of Amish identity. Conservative Mennonites refer to Ordnung by the English terms "discipline" or "standard" and are usually written.

The Amish blueprint for expected behavior, called the Ordnung, regulates private, public, and ceremonial life. Ordnung does not translate readily into English. Sometimes rendered as ordinance or discipline, the Ordnung is best thought of as an ordering of the whole way of life ... a code of conduct which the church maintains by tradition rather than by systematic or explicit rules. A member noted: The order is not written down. The people just know it, that's all. Rather than a packet of rules to memorize, the Ordnung is the understood behavior by which the Amish are expected to live. In the same way that the rules of grammar are learned by children, so the Ordnung, the grammar of order, is learned by Amish youth. The Ordnung evolved gradually over the decades as the church sought to strike a delicate balance between tradition and change. Specific details of the Ordnung vary across church districts and settlements.

Names of the Holocaust vary based on context. "The Holocaust" is the name commonly applied in English since the mid-1940s to the systematic extermination of 6 million Jews by Nazi Germany during World War II. The term is also used more broadly to include the Nazis' systematic murder of millions of people in other groups they determined were "untermensch" or "subhuman," which included primarily the Jews and the Slavs, the former having allegedly infected the latter, including ethnic Poles, the Serbs, Russians, the Czechs and others.

Amish Mennonites came into existence through reform movements among North-American Amish mainly between 1862 and 1878. These Amish moved away from the old Amish traditions and drew near to the Mennonites, becoming Mennonites of Amish origin. Over the decades, most Amish Mennonites groups removed the word "Amish" from the name of their congregations or merged with Mennonite groups.

Jewish assimilation refers to the gradual cultural assimilation and social integration of Jews in their surrounding culture as well as the ideological program promoting conformity as a potential solution to historic Jewish marginalization in the age of emancipation. 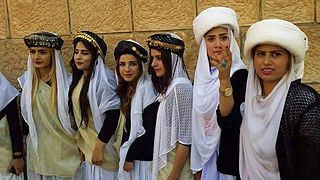 An ethnoreligious group is an ethnic group whose members are also unified by a common religious background.

Holocaust trivialization is a metaphorical or otherwise comparative use of the word holocaust that does not refer to the Holocaust, the genocide of European Jews in Nazi Germany during World War II.

Plain dress is a practice among some religious groups, primarily some Christian churches in which people dress in clothes of traditional modest design, sturdy fabric, and conservative cut. It is intended to show acceptance of traditional gender roles, modesty, and readiness to work and serve, and to preserve communal identity and separation from the immodest, ever-changing fashions of the world. 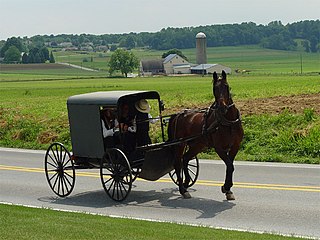 The Amish are a group of traditionalist Christian church fellowships with Swiss German and Alsatian Anabaptist origins. They are closely related to Mennonite churches. The Amish are known for simple living, plain dress, Christian pacifism, and slowness to adopt many conveniences of modern technology, with a view to not interrupt family time, nor replace face-to-face conversations whenever possible. The Amish value rural life, manual labor, humility, and Gelassenheit, all under the auspices of living what they interpret to be God's word. 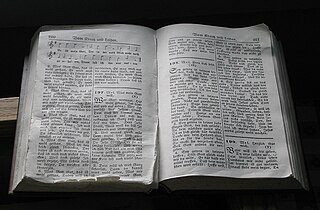 The Old Order Amish typically have worship services every second Sunday in private homes. The typical district has 80 adults and 90 children under age 19. Worship begins with a short sermon by one of several preachers or the bishop of the church district, followed by scripture reading and prayer, then another, longer sermon. The service is interspersed with hymns sung without instrumental accompaniment or harmony. This is meant to put the emphasis on what is said, not how it is being said. Many communities use an ancient hymnal known as the Ausbund. The hymns contained in the Ausbund were generally written in what is referred to as Early New High German, a predecessor to modern Standard German.

Amish believe large families are a blessing from God. Amish rules allow marrying only between members of the Amish Church. The elderly do not go to a retirement facility; they remain at home.

Subgroups of Amish developed over the years, as Amish churches have divided many times over doctrinal disputes. The 'Old Order' Amish, a conservative faction that withdrew from fellowship with the wider body of Amish in the 1860s, are those that have most emphasized traditional practices and beliefs. There are many different subgroups of Amish with most belonging, in ascending order of conservatism, to the Beachy Amish, New Order, Old Order, or Swartzentruber Amish groups.

A Seeker is a person likely to join an Old Order Anabaptist community, like the Amish, the Old Order Mennonites, the Hutterites, the Old Order Schwarzenau Brethren or the Old Order River Brethren. Among the 500,000 members of such communities in the United States there are only an estimated 1,200 to 1,300 outsiders who have joined them.