Eugene Edward Wood (October 20, 1925 – May 21, 2004) was an American television personality, known primarily for his work as an announcer on various game shows. From the 1960s to the 1990s, he announced many game shows, primarily Mark Goodson–Bill Todman productions such as Family Feud , Classic Concentration , Card Sharks , Password , and Beat the Clock . Wood also served a brief stint as a host on this last show, and on another show, Anything You Can Do . After retiring from game shows in 1996, Wood worked as an announcer for the Game Show Network until his retirement in 1998.

Wood was born in Quincy, Massachusetts. He majored in speech and theater at Emerson College.

His first role as a game show announcer came as a substitute on the ABC version of Supermarket Sweep in 1966 (though EOTVGS Vol. 2 says his first work as announcer was on the daytime version of Password ); three years later, he began a long association with Mark Goodson-Bill Todman Productions, where he worked on Beat the Clock as its announcer from 1969–72; after the departure of the show's host, Jack Narz, Wood then took over as host of Beat the Clock, with Nick Holenreich serving as announcer. Wood hosted the 1971–72 season of the short-lived game show Anything You Can Do, which featured teams of men competing against teams of women in stunts similar to Beat the Clock. He also appeared as a celebrity panelist on one week of Match Game in 1974.

By 1976, Wood had become a regular announcer for Goodson–Todman, working as voice-over for many of the company's game shows. In addition to his role as announcer, Wood regularly served as a warm-up act for the audiences on these shows, and often performed a series of comedy skits. Among his most popular jobs was as announcer on the original version of Family Feud . The original version, hosted by Richard Dawson, ran on ABC from 1976 to 1985, and when Family Feud was revived in 1988 with Ray Combs as host, Wood announced on that version as well through the 1994–1995 season, during which Dawson returned as host. Another show for which he announced on both the original version and a revival was Card Sharks . The show's first incarnation, starring Jim Perry, ran from 1978–81 on NBC, while two concurrent revivals (one on CBS and another in syndication, hosted by Bob Eubanks and Bill Rafferty, respectively) ran from 1986 to 1989. Wood announced the first few weeks of Bruce Forsyth's Hot Streak on ABC, before being replaced by Marc Summers.

After the 1985 death of the original announcer Johnny Olson on the Bob Barker version of The Price Is Right , Wood was one of four interim announcers on that show, until Rod Roddy was chosen as Olson's successor. At that same time, Wood also announced on the nightly syndicated version hosted by Tom Kennedy that ran for the season. According to former producer Roger Dobkowitz, between Barker, Goodson & Dobkowitz, himself, felt that his voice was a little on the harsh side and was unsuitable for the show, despite his experience. [2]

Wood wrote the narration for the 1965 film The World of Abbott and Costello .[ citation needed ]

The Price Is Right is an American television game show created by Bob Stewart, Mark Goodson and Bill Todman. The show revolves around contestants competing by identifying accurate pricing of merchandise to win cash and prizes. Contestants are selected from the studio audience when the announcer states the show's famous catchphrase, "Come on down!"

Match Game is an American television panel game show that premiered on NBC in 1962 and has been revived several times over the course of the last six decades. The game features contestants trying to match answers given by celebrity panelists to fill-in-the-blank questions. Beginning with the CBS run of the 1970s, the questions are often formed as humorous double entendres. 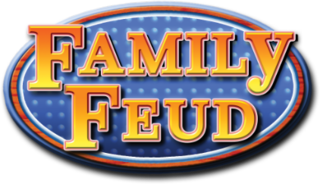 Family Feud is an American television game show created by Mark Goodson in which two families compete to name the most popular answers to survey questions in order to win cash and prizes.

John Leonard Olson was an American radio personality and television announcer. Olson is perhaps best known for his work as an announcer for game shows, particularly the work he did for Mark Goodson-Bill Todman Productions. Olson was the longtime announcer for the original To Tell the Truth and What's My Line?, and spent over a decade as the announcer for both Match Game and The Price Is Right, working on the latter series at the time of his death. 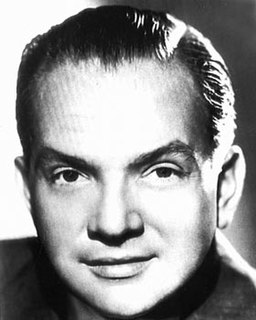 Mark Leo Goodson was an American television producer who specialized in game shows, most frequently with his business partner Bill Todman, with whom he created Goodson-Todman Productions.

Beat the Clock is a television game show that involves people trying to complete challenges to win prizes while faced with a time limit. The show was a creation of Mark Goodson-Bill Todman Productions. 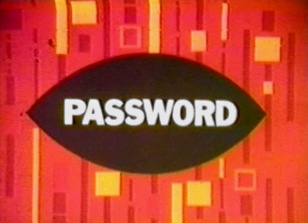 Password is an American television game show which was created by Bob Stewart for Goodson-Todman Productions. The host was Allen Ludden, who had previously been well known as the host of the G.E. College Bowl. In the game, two teams, each composed of a celebrity player and a contestant, attempt to convey mystery words to each other using only single-word clues, in order to win cash prizes.

John Lewis Gilbert III is an American show business personality who has worked mainly on television game shows. Originally a nightclub singer and entertainer, he has hosted and announced a number of game shows from various eras, dating as far back as the 1950s. He is known primarily for his work as the announcer and audience host for the syndicated version of the quiz show Jeopardy! since 1984. 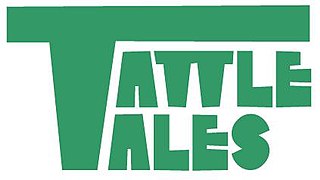 Tattletales is an American game show produced by Goodson-Todman Productions in association with Fremantle. The program had two runs on the CBS daytime schedule between February 1974 and June 1984. It was hosted by Bert Convy, with several announcers including Jack Clark, Gene Wood, Johnny Olson and John Harlan providing the voiceover at various times. Wood was the primary announcer during the show's first run, and Olson was announcing during the 1980s. 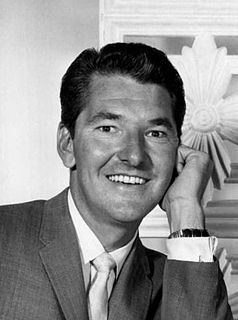 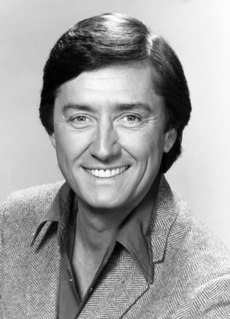 Jim Perry was an American-Canadian television game show host, singer, announcer, and performer in the 1970s and 1980s.

Game Show Moments Gone Bananas is a television series on VH1. The first of five hour-long episodes aired on May 21, 2005 with the last first-run episode airing on June 18. Each episode aired for the first time on Saturday mornings at 11:30 ET, but "officially" premiered at 10:00 PM that night.

The Price Is Right was an American game show wherein contestants placed successive bids on merchandise prizes with the goal of bidding closest to each prize's actual retail price without surpassing it. The show was a precursor to the current and best-known version of the program, which premiered in 1972 on CBS's daytime schedule. It makes The Price Is Right one of only a few game show franchises to have aired in some form across all three of the Big Three television networks.

Showoffs is an American television game show which ran on ABC from June 30 to December 26, 1975. Bobby Van was host, with Gene Wood as announcer. The Mark Goodson-Bill Todman production involved two teams competing in a game of charades.

Play Your Hunch was an American game show first hosted by Merv Griffin from 1958 to 1962, and was then hosted by Robert Q. Lewis until 1963. The announcers for the show were, respectively, Johnny Olson, Wayne Howell and Roger Tuttle. In 2001, Play Your Hunch was ranked #43 on TV Guide's "50 Greatest Game Shows of All Time".

Bern Bennett was an American radio and television announcer.

That's My Line is a summer CBS reality show developed by Mark Goodson. Conceived in response to the success of NBC's Real People and ABC's That's Incredible!, That's My Line borrowed its name from one of Goodson and Bill Todman's earlier productions, the panel game What's My Line?, and shared its central conceit of highlighting average people with unusual occupations. Unlike the earlier show, That's My Line had no panel or game components, instead being centered around interviews and demonstrations. The series ran as a summer replacement series for two abbreviated seasons in 1980 and 1981. 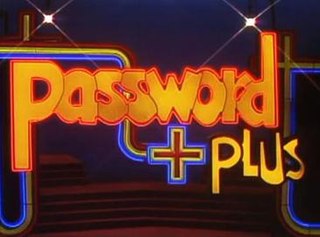 Password Plus and Super Password are American TV game shows that aired separately between 1979 and 1989. Both shows were revivals of Password, which originally ran from 1961 to 1975 in various incarnations. With only subtle differences between them, both Password Plus and Super Password followed the same general gameplay as their predecessor, whereby two teams of two people each – a celebrity and a contestant – attempted to guess a mystery word using only one-word clues.