The Geological Survey of Canada (GSC; French : Commission géologique du Canada (CGC)) is a Canadian federal government agency responsible for performing geological surveys of the country, developing Canada's natural resources and protecting the environment. A branch of the Earth Sciences Sector of Natural Resources Canada, the GSC is the country's oldest scientific agency and was one of its first government organizations.

In September 1841, the Province of Canada legislature passed a resolution that authorized the sum of £1,500 sterling be granted to the government for the estimated expense of performing a geological survey of the province. In 1842, the Geological Survey of Canada was formed to fulfill this request. [1]

William Edmond Logan was in Montreal at the time and made it known that he was interested in participating in this survey. Gaining recommendations from prominent British scientists, Logan was appointed the first GSC director on April 14, 1842. Four months later, Logan arrived in Kingston, Ontario, to compile the existing body of knowledge of Canada's geology. In the spring of 1843, Logan established the GSC's headquarters in Montreal (in his brother's warehouse and then in a rented house on Great St. James Street (now Saint Jacques Street). [2] One of the prominent cartographers and the chief topographical draughtsman was Robert Barlow, who began his work in 1855. Chemist T. Sterry Hunt joined in the early days and the Survey added paleontological capability in 1856 with the arrival of Elkanah Billings. [1] After Aylesworth Perry was appointed as acting librarian in 1881 he prepared the catalogue of reference works on geology, mineralogy, metallurgy, chemistry and natural history. [3] George Mercer Dawson became a staff member in 1875, progressed to assistant director in 1883 and finally to director of the Geological Survey of Canada in 1895. [1] The Geological Survey of Canada first began allowing women to conduct fieldwork in the early 1950s. [4] Dr. Alice Wilson, the first of these women, lobbied for the inclusion of paleontologist Frances Wagner shortly afterward. [4] Around this same time, the GSC employed a third woman Dr. Helen Belyea. [4]

The Canadian National Seismograph Network is monitored by the Geological Survey of Canada.

The Geological Survey Canada operates a network of 14 magnetic observatories throughout Canada, located as follows: [5] [6]

Sir William Edmond Logan, FRSE FRS FGS, was a Canadian-born geologist and the founder and first director of the Geological Survey of Canada.

Sir Kazimierz Stanisław Gzowski,, was an engineer best known for his work on a wide variety of Canadian railways as well as work on the Welland Canal. He also served as acting Lieutenant Governor of Ontario from 1896 to 1897. 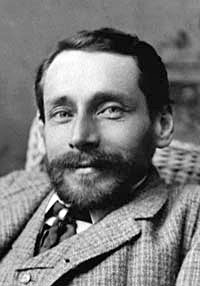 George Mercer Dawson was a Canadian geologist and surveyor. He was born in Pictou, Nova Scotia, the eldest son of Sir John William Dawson, Principal of McGill University and a noted geologist, and his wife, Lady Margaret Dawson. By age 11, he was afflicted with tuberculosis of the spine that resulted in a deformed back and stunted growth. Physical limitations, however, did not deter Dawson from becoming one of Canada's greatest scientists.

The Ministry of Energy, Northern Development and Mines (MENDM) is responsible for developing a safe, reliable and affordable energy supply across the province, overseeing Ontario’s mineral sector and promoting northern economic and community development.

Alice Evelyn Wilson, MBE, FRSC, FRCGS was Canada's first female geologist. Her scientific studies of the rocks and fossils of the Ottawa region between 1913 and 1963 remain a respected source of knowledge.

Digby Johns McLaren, was a Canadian geologist and palaeontologist.

Sir John Henry Lefroy was an English military man and later colonial administrator who also distinguished himself with his scientific studies of the Earth's magnetism.

Edward A. "Ted" Irving, was a geologist and scientist with the Geological Survey of Canada. His studies of paleomagnetism provided the first physical evidence of the theory of continental drift. His efforts contributed to our understanding of how mountain ranges, climate, and life have changed over the past millions of years.

Robert Bell was a Canadian geologist, professor and civil servant. He is considered one of Canada’s greatest exploring scientists, having named over 3,000 geographical features. 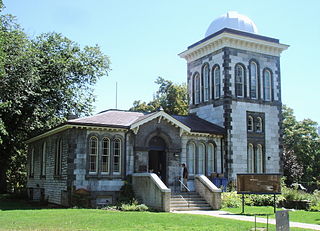 The Toronto Magnetic and Meteorological Observatory is a historical observatory located on the grounds of the University of Toronto, in Toronto, Ontario, Canada. The original building was constructed in 1840 as part of a worldwide research project run by Edward Sabine to determine the cause of fluctuations in magnetic declination. Measurements from the Toronto site demonstrated that sunspots were responsible for this effect on Earth's magnetic field. When this project concluded in 1853, the observatory was greatly expanded by the Canadian government and served as the country's primary meteorological station and official timekeeper for over fifty years. The observatory is considered the birthplace of Canadian astronomy. 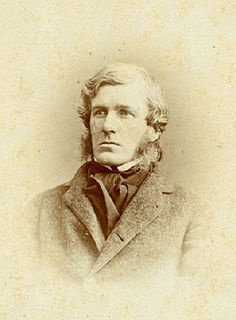 Elkanah Billings is often referred to as Canada's first paleontologist. Billings was born on a farm by the Rideau River outside Bytown (Ottawa), now known as Billings Estate. His parents were named Lamira Dow and Braddish Billings. His family included an older sister named Sabra and an older brother Maj Braddish Billings Jr, who practised as an architect and served in the North-West Rebellion. His younger siblings were Samuel, Sarah and Charles. He was originally educated in law and in 1845, he was called to the Canadian bar. In 1852, he founded the journal the Canadian Naturalist . He continued to practise law until 1856, when he was hired to be the first paleontologist for Geological Survey of Canada (GSC). In his lifetime, he identified 1065 new species and 61 new genera, including Aspidella, the first documented fossil of the Ediacaran biota.

This article outlines the history of natural scientific research in Canada, including physics, astronomy, space science, geology, oceanography, chemistry, biology, and medical research. Neither the social sciences nor the formal sciences are treated here.

Ann Phyllis Sabina Stenson was a Canadian mineralogist, gemmologist, teacher, public servant and popular science author. Sabina has been instrumental in the development of X-ray diffraction as a means of identifying minerals. She is credited with the discovery of a variety of different minerals and currently has one named in her honor: Sabinaite. a string of educational books and guides that focus on the study of numerous minerals throughout Canada, and has been important in the creation of a number of geological associations.

Henry George Vennor was a Canadian geologist and ornithologist who became well known as a weather forecaster.

Frances Joan Estelle Wagner was a Canadian paleontologist and public servant. Specializing in the use of micropaleontology to study marine geology, she was one of the first female scientists to be permitted to conduct fieldwork by the Geological Survey of Canada, and in 1973 was elected as a Fellow of the Royal Canadian Geographical Society in recognition of her achievements and scientific research.