Georg Friedrich Kauffmann (14 February 1679 – 24 March 1735) was a Baroque composer and organist from northern-central Germany who composed primarily sacred works for the organ and voice.

Georg Friedrich Kauffmann was born in Ostramondra, Thuringia. Little is known of his early life; however, he did have early keyboard training with J.H. Buttstett in Erfurt. His latter years of education were under J.F. Alberti in Merseburg with whom he studied organ and composition.

In 1698, Alberti suffered an injury to his right hand, inhibiting his ability to play the organ at the cathedral. Kauffmann replaced Alberti permanently as teacher in Merseburg as well as court and cathedral organist upon Alberti’s death in 1710.

Mid-life and the Leipzig Affair

Kauffmann had several connections with Leipzig, as most predominant musicians of the time in Germany would have. At one point, he was originally asked by the university there to inspect the newly finished organ at St. Paul’s Cathedral (a very large honor at the time) – however, the offer ultimately went to Johann Sebastian Bach.

In 1725, Kauffmann announced his intentions of the publication of a treatise to be entitled: Intro duzzione alla musica antica et moderna, das ist: Eine auführliche Einleitung zur alten und neuen Wissenschaft der edlen Music. (In English: Rules for Composition in the Old and New Styles.) It was never formally published, though it did circulate around the musical community of the day and most likely was used by many educators as a teaching tool.

Ultimately Kauffmann went to Leipzig in 1722 to compete for the position of Kapellmeister along with seven other predominant musicians of Germany at the time. The position of Kapellmeister of Leipzig was extremely coveted by most in the musical community; the position was formally held by Johann Kuhnau until his death that same year. Kauffmann’s audition went well, even though he asked for a second hearing by the town council who were responsible for hiring. He was the prime contender for the position until April 1723 when J.S. Bach was hired.

A decade after the Leipzig Affair, Kauffmann started to publish in sequential volumes his Harmonische Seelenlust which were a complete edition of his organ chorales. However, he died of consumption in Merseburg on 24 March 1735 before they had been completely published. His widow saw the endeavor though and completed the publication of the Harmonische Seelenlust. While they did not make a great first impression, over the next century they became one of the most significant achievements in German organ music, and remained in high demand well into the 19th century. They consisted of ninety-eight preludes on sixty-three chorales. Many of his organ works can be found in organ text books and instructional materials today.

An important aspect of Baroque composition was who copied the compositions down to perform in their churches or courts as printing music was very novel at the time and very expensive. J.G. Walther (a friend of Bach) copied many of his early works, as well as Johann Tobias Krebs, a pupil of Walther. Johann Kuhnau and two scribes copied parts from Kauffmann’s Solo Cantaten, and performed them on 16 August 1722, and after Kauffmann’s death in their respected churches. Gottfried Kirchhoff (the Halle organist) owned several other cantatas by Kauffmann, all of which were performed in Halle, however none of the manuscripts survived. In 1727, Wilhelm Friedemann Bach, who was studying in Merseburg with J.G. Graun, copied three choral works which were ultimately performed by J.S. Bach’s choir. (see The Bach Connection)

One of the most important questions that surround Kauffmann’s life was how much of an influence was he upon Johann Sebastian Bach. While it can be hard to know who was imitating who, both of the works can be seen similar in certain motives and harmonic progressions, though it is obvious that Bach was the better master of these things. J.G. Walther’s friendship with Bach while transcribing some of Kauffmann’s early works can lead to influential questions, as well as Bach’s education of members of the Krebs family, Kuhnau’s employment by Bach in latter years (in which he brought at least three choral pieces to Bach's choir which they performed). Also Wilhelm Friedemann Bach, J.S. Bach’s eldest son, studied with Graun in Merseburg as well as transcribing some of Kauffmann works with Kuhnau. While there is little question of Bach’s awareness of Kauffmann, there are deeper questions of imitation and musical evolution.

Kauffmann was recently used as part of Itamar Moses’ play, Bach at Leipzig , in which he is seeking employment at the Thomaskirche in Leipzig upon the death of Johann Kuhnau, the Kapellmeister. The play uses Kauffmann as well as many other composers of the time all bidding for the job, which ultimately goes to J.S. Bach. See A Curtain Up Review; Bach at Leipzig [ permanent dead link ]for additional information.

Johann Friedrich Agricola was a German composer, organist, singer, pedagogue, and writer on music. He sometimes wrote under the pseudonym Flavio Anicio Olibrio. 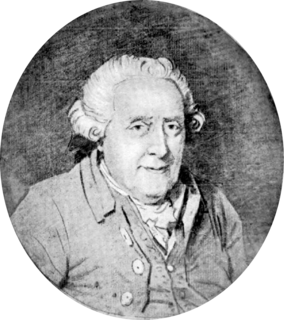 Wilhelm Friedemann Bach, the second child and eldest son of Johann Sebastian Bach and Maria Barbara Bach, was a German composer and performer. Despite his acknowledged genius as an organist, improviser and composer, his income and employment were unstable and he died in poverty.

Friedrich Wilhelm Zachow or Zachau was a German musician and composer of vocal and keyboard music.

This is a list of notable events in music that took place in the year 1733.

Johann Kuhnau was a German polymath: known primarily as composer today, he was also active as novelist, translator, lawyer, and music theorist, being able late in life to combine these activities with the duties of his official post of Thomaskantor in Leipzig, which he occupied for 21 years. Much of his music, including operas, masses, and other large-scale vocal works, is lost. His reputation today rests on a set of programmatic keyboard sonatas published in 1700, in which each sonata depicted in detail a particular story from the Bible. After his death, Kuhnau was succeeded as Thomaskantor by Johann Sebastian Bach.

The Neumeister Collection is a compilation of 82 chorale preludes found in a manuscript copy produced by Johann Gottfried Neumeister (1757–1840). When the manuscript was rediscovered at the Yale University in the 1980s it appeared to contain 31 previously unknown early chorale settings by Johann Sebastian Bach, which were added to the BWV catalogue as Nos. 1090–1120, and published in 1985.

Christian Friedrich Witt, or Witte was a German composer, music editor and teacher.

Johann Friedrich Alberti was a German composer and organist.

Wo Gott der Herr nicht bei uns hält is a chorale fantasia for organ composed by Johann Sebastian Bach in the early 18th century. A copy of the chorale fantasia resurfaced on 15 March 2008 at an auction of items from the collection of the 19th-century Bach scholar Wilhelm Rust. The piece, until then known as BWV Anh. 71, could by this discovery be authenticated as Bach's and was reassigned the number BWV 1128.

Wer ist der, so von Edom kömmt is a pasticcio Passion oratorio based on compositions by Carl Heinrich Graun, Georg Philipp Telemann, Johann Sebastian Bach and others. The pasticcio was assembled around 1750. 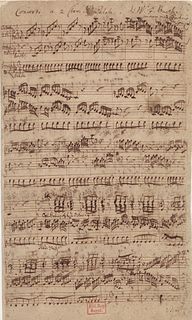 The concerto transcriptions of Johann Sebastian Bach date from his second period at the court in Weimar (1708–1717). Bach transcribed for organ and harpsichord a number of Italian and Italianate concertos, mainly by Antonio Vivaldi, but with others by Alessandro Marcello, Benedetto Marcello, Georg Philipp Telemann and the musically talented Prince Johann Ernst of Saxe-Weimar. It is thought that most of the transcriptions were probably made in 1713–1714. Their publication by C.F. Peters in the 1850s and by Breitkopf & Härtel in the 1890s played a decisive role in the Vivaldi revival of the twentieth century.