Since 3 December 2007, he has been the presenter of the BBC News at Six and was previously the main presenter of GMT on BBC World News since its launch on 1 February 2010.

Alagiah was born in Colombo, Ceylon. His parents, Donald Alagiah, an engineer, and Therese, were Sri Lankan Tamil. [1] In 1961, his parents moved to Ghana in West Africa, where he had his primary education at Christ the King International School. [2] His secondary education took place at St John's College, an independent Roman Catholic school in Portsmouth, England, after which he read politics at Van Mildert College, Durham University. [2] Whilst at Durham, he wrote for and became editor of the student newspaper Palatinate and was a sabbatical officer of Durham Students' Union.

In 2004, he returned to his grandfather's original home in Sri Lanka in the aftermath of the Asian tsunami to survey the damage. [2] The family's former home had been destroyed, but he was able to recognise an old well where he had played with his sisters, although the well was unsalvageable.[ citation needed ]

Alagiah joined the BBC in 1989 after seven years in print journalism with South Magazine. [3] Before going behind the studio desk, he was Developing World correspondent, based in London, and then Southern Africa correspondent in Johannesburg. [2] As one of the BBC's leading foreign correspondents, he reported on events ranging from the genocide in Rwanda to the plight of the Marsh Arabs in southern Iraq to the civil wars in Afghanistan, Liberia, Sierra Leone and Somalia. [2]

He was the presenter of BBC Four News from its launch in 2002; the programme was later relaunched as The World and then another edition of World News Today . In January 2003 he joined the BBC Six O'Clock News , which he co-presented with Sophie Raworth until October 2005, and with Natasha Kaplinsky until October 2007. Since 3 December 2007, he has been the sole presenter of the Six O'Clock News. Prior to that, he had been the deputy anchor of the BBC One O'Clock News and BBC Nine O'Clock News from 1999. Since 3 July 2006, he has presented World News Today on BBC World News and BBC Two, which was rebranded GMT on 1 February 2010. He last appeared on the programme in 2014. He was formerly a relief presenter on BBC News at Ten , presenting mainly Monday to Thursday when main presenters Huw Edwards and Fiona Bruce were unavailable.

A specialist on Africa and the developing world, Alagiah has interviewed, among others, Nelson Mandela, Archbishop Desmond Tutu, former Secretary-General of the United Nations Kofi Annan and President Robert Mugabe of Zimbabwe. [2] His other documentaries and features include reports on why affirmative action in America is a 'Lost Cause', for the Assignment programme, Saddam Hussein's genocidal campaign against the Kurds of northern Iraq for the BBC's Newsnight programme and a report on the last reunion of the veterans of Dunkirk. [3]

In 2000, Alagiah was part of the BBC team which collected a BAFTA award for its coverage of the Kosovo conflict. He has won numerous awards including Best International Report at the Royal Television Society in 1993 and in 1994 was the overall winner of the Amnesty International UK Media Awards. He was appointed Officer of the Order of the British Empire (OBE) in the 2008 New Year Honours.

His appearances at literary festivals include Cheltenham, Keswick, Hay-on-Wye and London, and he has spoken at the Royal Geographical Society, the Royal Society of Arts and at the Royal Overseas League. He is on the Board of the Royal Shakespeare Company.

From 2002 to 2009, Alagiah was a patron of the Fairtrade Foundation [5] from which in July 2009, he was obliged to resign by BBC Management who claimed professional conflict of interest. [6] [7] Complaints were received at the BBC from members of the public who were unhappy that Alagiah had been asked to step down. The BBC responded that in keeping with its principles of impartiality, it would be inappropriate for one of its leading journalists to be seen supporting a movement that clearly represents a controversial view of global trade. [8] [9] He has also been actively involved in supporting microfinance as a tool for development, including recent appearances in support of Opportunity International. He has been a patron of Parenting UK since 2000.

In 2010, he received the Outstanding Achievement in Television award at the Asian Awards. [10]

In 2020, his debut novel The Burning Land was shortlisted for a Society of Authors' award. [11] The book is described as a "gripping, pacy thriller about corruption and homicide in South Africa". [12]

He is married to Frances Robathan, whom he met at Durham University. [13] The couple have two children, Adam and Matthew. [1]

On 17 April 2014, it was announced that Alagiah was being treated for colorectal cancer. [14] A statement from the BBC said: "He is grateful for all the good wishes he has received thus far and is optimistic for a positive outcome." On 28 June, Alagiah announced on Twitter that he was making "encouraging progress". [15] In late October 2015 he announced on Twitter that the treatment was officially over, and he returned to the BBC on 10 November. [16] [17] In January 2018 it emerged that the cancer had returned and he would undergo further treatment. [18] [19]

In March 2018, in an interview with The Sunday Times , Alagiah noted that his cancer was terminal and could have been caught earlier if the screening programme in England, which is automatically offered from the age of 60, was the same as that in Scotland, where it is automatically offered from the age of 50. [13] [20] In mid-March 2020, during the COVID-19 pandemic, Alagiah was tested to have COVID-19, and experienced mild symptoms. [21]

In June 2020 Alagiah said that the cancer had spread to his lungs, liver and lymph nodes, but was not at a "chronic" or "terminal" stage. [22]

Moira Clare Ruby Stuart OBE is a British presenter and broadcaster, who was the second African-Caribbean female newsreader to appear on British television, having worked on BBC News since 1981. 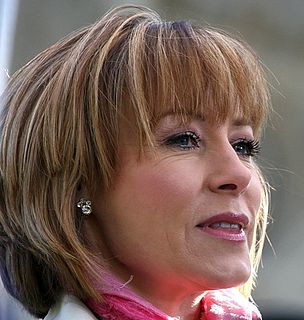 Sian Mary Williams, is a Welsh journalist and current affairs presenter, best known for her work with the BBC.

Fiona Elizabeth Bruce is a British journalist, newsreader and television presenter. She joined the BBC as a researcher for Panorama in 1989, and has since become the first female newsreader on the BBC News at Ten, as well as presenting many flagship programmes for the corporation, including BBC News at Six, Crimewatch, Real Story, Antiques Roadshow, and Fake or Fortune?. Since 10 January 2019 she has been the presenter of the BBC One television programme Question Time. William Robert Jolyon Turnbull is an English journalist and presenter, who currently works as a presenter for the radio station Classic FM, following many years as a presenter with the BBC.

The BBC News at One is the afternoon/lunchtime news bulletin from the BBC. Produced by BBC News, the programme is broadcast on BBC One and the BBC News channel Monday to Friday at 1:00pm. The programme is currently presented by Simon McCoy or Jane Hill. 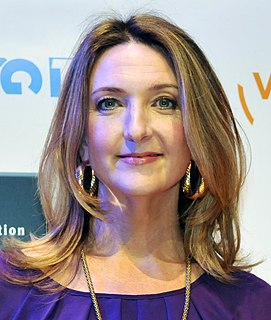 Victoria Antoinette Derbyshire is an award-winning British journalist, newsreader and broadcaster. Her eponymous current affairs and debate programme was broadcast on BBC Two and the BBC News Channel from 2015 until March 2020. Since then she has been the main presenter of BBC News at Nine on BBC One She has also presented Newsnight and BBC Panorama. She was one of a group of women to appear in ITV's The Real Full Monty: Ladies Night – a factual entertainment documentary to raise awareness of breast cancer - which won an International Emmy, an RTS and was BAFTA-nominated. She formerly presented the morning news, current affairs and interview programme on BBC Radio 5 Live between 10 am and 12 noon each weekday and was a 5 Live presenter for 16 years, departing in late 2014. She left at the same time as fellow 5 Live broadcasters Richard Bacon and Shelagh Fogarty. She won gold Sony awards in 1999, 2002, 2010, 2011, 2012 and 2014, a BAFTA award in 2017, and two Royal Television Society awards in 2018.

Carrie Gracie is a Scottish journalist and newsreader best-known as having been China Editor for BBC News. 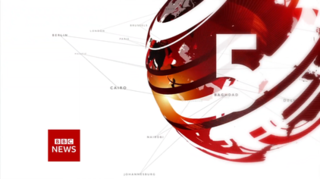 Andrew Peach is a radio presenter in the United Kingdom. He presents a daily news and phone-in show on BBC Radio Berkshire and network programmes such as PM and the Six O'Clock News on BBC Radio 4 and Newshour and The Newsroom on BBC World Service. He has also been heard reading news bulletins on BBC Radio 2, BBC Radio 3 and BBC Radio 4. Peach marked 25 years on BBC Radio on 10 October 2017 with a message of congratulations from Prime Minister Theresa May.

Michael Collie is a British television and radio presenter who appears on BBC News. He is also a former presenter of the weekly politics programme, the Politics Show, in addition to his work presenting BBC Midlands Today, produced by the BBC's West Midlands region.

GMT was a news programme airing weekdays on BBC World News, which premiered on 1 February 2010 and ended on 1 November 2019. The programme's main presenters are Lucy Hockings and Stephen Sackur, who are rotated depending on the edition, with Tim Willcox serving as a primary relief presenter.