Colonel George Anthony Legh-Keck JP DL (1774–1860) was a British MP in the Georgian era who owned landed estates in Leicestershire and Lancashire.

Colonel is a senior military officer rank below the brigadier and general officer ranks. However, in some small military forces, such as those of Monaco or the Vatican, colonel is the highest rank. It is also used in some police forces and paramilitary organizations. 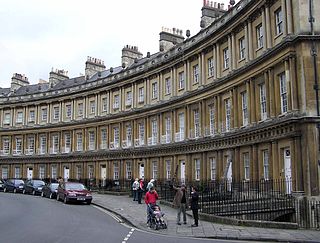 The Georgian era is a period in British history from 1714 to c. 1830–37, named after the Hanoverian kings George I, George II, George III and George IV. The sub-period that is the Regency era is defined by the regency of George IV as Prince of Wales during the illness of his father George III. The definition of the Georgian era is often extended to include the relatively short reign of William IV, which ended with his death in 1837.

Legh-Keck was born at Stoughton Grange, Leicestershire, the only surviving son of Anthony James Keck, MP for Newton, and Elizabeth (née Legh), [1] second daughter and co-heiress of Peter Legh, MP, of Lyme Hall, Cheshire. His wife, Elizabeth Atherton, inherited Bank Hall in Bretherton, Lancashire, which he renovated with help from the architect George Webster in 1832-33.

Anthony James Keck was an English politician who sat in the House of Commons from 1765 to 1780.

Legh-Keck was returned to parliament five times as MP for Leicestershire between 1797 and 1831. [2]

Commissioned as an officer in the Leicestershire Yeomanry Cavalry in 1803, he later served as Lieutenant-Colonel Commandant of the regiment until his death in 1860. [3] Legh-Keck, in a portrait from 1851, held a broad-topped shako sporting a 12-inch white plume held in place by bronze chin scales. [4] [5]

The Leicestershire Yeomanry was a yeomanry regiment of the British Army, first raised in 1794 and again in 1803, which provided cavalry and mounted infantry in the Second Boer War and the First World War and provided two field artillery regiments of the Royal Artillery in the Second World War, before being amalgamated with the Derbyshire Yeomanry into forming the Leicestershire and Derbyshire Yeomanry in 1957. The regiment's lineage is currently perpetuated by E Squadron of the Royal Yeomanry.

In 1805 Legh-Keck bought the lordship of the manor of Houghton-on-the-Hill which remained in the Lilford family until 1913. [6]

Houghton on the Hill is a village and civil parish lying six miles to the east of Leicester in the Harborough district, in Leicestershire, East Midlands in England. The population of the civil parish at the 2011 census was 1,524.

Baron Lilford, of Lilford in the County of Northampton, is a title in the Peerage of Great Britain. It was created in 1797 for Thomas Powys, who had previously represented Northamptonshire in the House of Commons. His grandson, the third Baron, served as a Lord-in-waiting from 1837 to 1841 in the Whig administration of Lord Melbourne. He was succeeded by his son, the fourth Baron. He was an ornithologist. On the death of his younger son, the sixth Baron, in 1949, the line of the eldest son of the second Baron failed. The late Baron was succeeded by his second cousin once removed, the seventh Baron. He was the great-great-grandson of the Hon. Robert Vernon Powys, second son of the second Baron. As of 2010 the title is held by his only son, the eighth Baron, who succeeded in 2005. The family seat from 1711 until the 1990s was Lilford Hall in Northamptonshire. The current Baron Lilford retains ownership of land in Jersey, South Africa and West Lancashire including the Bank Hall Estate, which were inherited in 1860 by Thomas Atherton Powys, 3rd Baron Lilford upon the death of his wife's cousin George Anthony Legh Keck.

His younger cousin was William Legh, 1st Baron Newton, who previously served as a Member of Parliament.

In 1802, Legh-Keck married his cousin Elizabeth Atherton, second daughter and co-heiress of Robert Atherton, MP, of Atherton Hall, Lancashire [7] and Henrietta Maria Legh of Lyme. In 1832, he engaged the architect, George Webster to design extensions and renovate Bank Hall, her ancestral mansion at Bretherton, Lancashire, also installing box pews at St Mary's Church, Tarleton, where he was patron of the living. His wife, Elizabeth Legh-Keck, died at Bank Hall in 1837 as did he aged 86 on 4 September 1860, being buried at Stoughton Church. [8]

Lord Lilford then removed to his family seat at Lilford Hall, Northamptonshire, leaving Bank Hall empty and leasing it out.

Legh-Keck collected stuffed animals and birds and sets of horns from species worldwide. He also owned a collection of classical-style statuettes and casts of figures by the sculptor Antonio Canova.

In 1830, the artist Thomas Phillips painted a portrait of Legh-Keck which now is at the Leicester Arts and Museums Service Collection. [9]

A large mural painted on the wall of the drawing room at Bank Hall, subject unknown was lost when the roof of the west wing collapsed in the 1980s.

There is a collection of Colonel Legh-Keck's accoutrements held by the Leicestershire Yeomanry Association. [10] 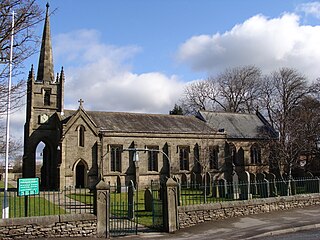 Bretherton is a small village and civil parish in the Borough of Chorley, Lancashire, England, situated to the south west of Leyland and east of Tarleton. The population of the civil parish at the 2011 census was 669. Its name suggests pre-conquest origins and its early history was closely involved with the manor house Bank Hall and the families who lived there. Bretherton remained a rural community and today is largely residential with residents travelling to nearby towns for employment. 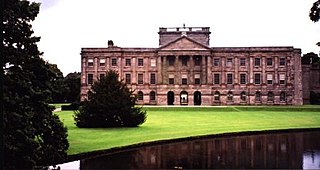 Samuel William Clowes was an English Conservative politician who sat in the House of Commons from 1868 to 1880.

The Leghs of Adlington were established by Robert de Leigh who inherited the lordship of the manor of Adlington from his mother Elena de Corona. His father, John de Leigh, who was lord of the manor of Over Knutsford and seated at Norbury Booths, descended in the male line from the Venable family.

Sir Thomas Powys, MP, was Attorney General to King James II. He was chief prosecutor at the trial of the Seven Bishops, June 1688; and MP for Ludlow. He served as Justice of the King's Bench 1713–1714, but was dismissed.