George Clement Boase (20 October 1829, in Penzance – 1 October 1897, in Lewisham) was an English bibliographer and antiquary.

Boase's father was a banker, and Boase himself took up banking in Cornwall and London as a young man from 1846 to 1854. [1] In 1854 Boase voyaged to Australia: arriving at Melbourne, he obtained work as tutor to the children of Thomas Darchy at the Murrumbidgee River, New South Wales and also worked as correspondent for the Sydney Morning Herald . In 1864 he returned to London, [2] managing the business of Whitehead & Co., provision merchants until taking retirement in 1874. [1]

Like his elder brother, Charles William Boase, Fellow and Librarian of Exeter College, Oxford and his younger brother, the biographer Frederic Boase, George Boase now took up bibliographical pursuits. [3] As well as the works listed below, he compiled the Cornish part of W. W. Skeat's Bibliographical List of the Works... Illustrative of the Various Dialects of English (1877) and helped John Ingle Dredge with his work on Devon bibliography. [1] He was a prolific contributor to Notes and Queries , the Western Antiquary and the Dictionary of National Biography .

Richard Carew was a Cornish translator and antiquary. He is best known for his county history, Survey of Cornwall (1602).

William Miller known throughout Latin America as Guillermo Miller, was an English-born soldier who participated in several South American revolutions, and then became a diplomat.

Jonathan Couch was a Cornish naturalist, the only child of Richard and Philippa Couch, of a family long resident at Polperro, a small fishing village between Looe and Fowey, on the south coast of Cornwall. A blue plaque on the wall of Warren cottage commemorates his birthplace.

John Ralfs was an English botanist. Born in Millbrook, near Southampton, he was the second son of Samuel Ralfs, a yeoman of an old family in Hampshire. He has been commemorated in the names of many plant groups and taxa at many levels.

Edward Budge (1800–1865) was an English theologian, geologist, and general writer.

Charles Chorley was an English journalist, man of letters and translator from several languages.

John Whitaker B.D., F.S.A., was an English historian and Anglican clergyman. Besides historical studies on the Roman Empire and on the early history of Great Britain he was a reviewer for London magazines and a poet.

Landulph is a hamlet and a rural civil parish in south-east Cornwall, England, United Kingdom. It is about 3 miles (5 km) north of Saltash in the St Germans Registration District.

Boase is a surname. Notable people with the surname include:

William Hals (1655–1737) was a British historian who compiled a History of Cornwall, the first work of any magnitude that was printed in Cornwall. He was born at Tresawsan, in the parish of Merther in Cornwall. Much of his work was never published but was used by other Cornish historians, including Davies Gilbert, Thomas Tonkin, and John Whitaker. Some of his original work is now held by the British Library.

William Jordan, Cornish dramatist, lived at Helston in Cornwall, and is supposed to have been the author of the Cornish language mystery or sacred drama Gwreans an Bys: the Creacon of the World. The oldest manuscript is in small folio in the Bodleian Library ; with it is a later copy; another is in the British Museum, together with a translation made by John Keigwin; and a fourth was in 1858 in the possession of John Camden Hotten; a fifth copy, perhaps the same as the fourth, was in 1890 in the possession of John Crichton-Stuart, 3rd Marquess of Bute and a sixth belonged to William Copeland Borlase.

Pender Hodge Cudlip (1835–1911) was an English Anglican High Church clergyman, theologian and writer. Born in Cornwall, he became well known as a preacher in Devon and spent most of his clerical life there. As the husband of writer Annie Hall Cudlip, née Thomas, he self-published a series of books on religion and theology between 1895 and 1905.

Frederic Boase was an English librarian and biographer.

Richard Thomson (1794–1865) was an English librarian and antiquary.

Charles William Boase (1828–1895) was an English academic, antiquarian and librarian.

Sibella Elizabeth Miles, was an English schoolteacher, poet and writer of the 19th century.

The Egyptian House is a grade I listed building in the Cornish town of Penzance. It is built in the style of Egyptian Revival architecture and has been in the ownership of the Landmark Trust since the 1970s. The current building dates from 1835–36. 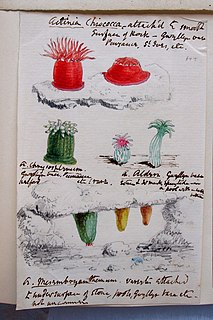 William Pennington Cocks (1791-1878) was an English surgeon naturalist principally interested in marine fauna. He was born in Devon. Owing to ill-health, when he was still only 51, he retired to Falmouth in Cornwall. He described the nudibranch Aeolidiella alderi.