The center has its origin in the Museum of the American Indian founded by George Heye in 1916. It became part of the national museum and Smithsonian in 1987.

The center is named for George Gustav Heye, who began collecting Native American artifacts in 1903. He founded and endowed the Museum of the American Indian in 1916, and it opened in 1922, in a building at 155th Street and Broadway, part of the Audubon Terrace complex, in the Sugar Hill neighborhood, just south of Washington Heights. [2]

By early 1987, U.S. senator Daniel Patrick Moynihan was proposing legislation that would turn over the Alexander Hamilton U.S. Custom House, on Bowling Green in Lower Manhattan, to the Museum of the American Indian. [3] For the past ten years, the museum had wished to relocate because its Upper Manhattan facility was insufficient, and the Custom House was being offered as an alternative for the museum's possible relocation to Washington, D.C. [4] [5] Mayor Ed Koch and U.S. senator Al D'Amato were initially opposed to Moynihan's plan, but dropped their opposition by August 1987. [6] U.S. senator Daniel Inouye introduced the National Museum of the American Indian Act the next month, which would have instead merged the museum's collection with that of the Smithsonian Institution in Washington, D.C. [7] A compromise was reached in 1988, in which the Smithsonian would build its own museum in Washington, D.C. The Smithsonian would also acquire the Heye collection, which it would continue to operate in New York City at the Custom House. [8] [9] The act was passed in 1989. [10]

The George Gustav Heye Center opened in the Custom House in 1994. [11] The Beaux Arts-style building, designed by architect Cass Gilbert, was completed in 1907 and is both a National Historic Landmark [12] and a New York City designated landmark. [13] [14] In 2006, a renovation project reworked space on the ground floor into the Diker Pavilion, adding approximately 6,000 square feet of space available for public display and events. [15] The center's exhibition and public access areas total about 20,000 square feet (1,900 m2). The Heye Center offers a range of exhibitions, film and video screenings, school group programs and living culture presentations throughout the year.

The permanent collection of the Heye Center is called Infinity of Nations, and is designed to show the scope of the Smithsonian's collection. Organized by geographic regions (including Central and South America), the exhibit displays over 700 items and crosses the line from ethnology to art. [16] [17] Multimedia interactions include audio and video, and feature commentary by historians on specific objects.

The rotunda on the second floor is frequently used as a performance space, and features murals reflecting the history of the building, done by Reginald Marsh. [18]

The ground floor of the building houses the Diker Pavilion for Native Arts and Culture and the Education Center (referred to as the Tipi Room). [19] 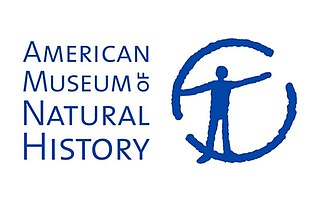 The American Museum of Natural History is a natural history museum on the Upper West Side of Manhattan in New York City. In Theodore Roosevelt Park, across the street from Central Park, the museum complex comprises 26 interconnected buildings housing 45 permanent exhibition halls, in addition to a planetarium and a library. The museum collections contain over 34 million specimens of plants, animals, fossils, minerals, rocks, meteorites, human remains, and human cultural artifacts, as well as specialized collections for frozen tissue and genomic and astrophysical data, of which only a small fraction can be displayed at any given time. The museum occupies more than 2 million square feet (190,000 m2). AMNH has a full-time scientific staff of 225, sponsors over 120 special field expeditions each year, and averages about five million visits annually.

The National Museum of the American Indian is a museum in the United States devoted to the culture of the indigenous peoples of the Americas. It is part of the Smithsonian Institution group of museums and research centers.

The Alexander Hamilton U.S. Custom House is a government building, museum, and former custom house at 1 Bowling Green, near the southern end of Manhattan in New York City, United States. Designed by Cass Gilbert in the Beaux-Arts style, it was erected from 1902 to 1907 by the U.S. government as a headquarters for the Port of New York's duty collection operations. The building contains the George Gustav Heye Center museum, the United States Bankruptcy Court for the Southern District of New York, and the New York regional offices of the National Archives. The facade and part of the interior are New York City designated landmarks, and the building is a National Historic Landmark listed on the National Register of Historic Places (NRHP). It is also a contributing property to the Wall Street Historic District, listed on the NRHP.

Bowling Green is a small public park in the Financial District of Lower Manhattan, New York City, at the southern end of Broadway. Located next to the site of the original Dutch fort of New Amsterdam, it served as a public place before being designated as a park in 1733. It is the oldest public park in New York City and is surrounded by its original 18th-century fence. It included an actual bowling green and an equestrian statue of King George III prior to the American Revolutionary War. 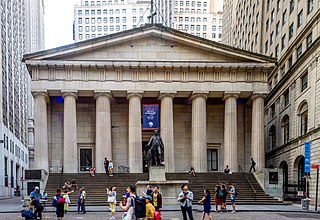 Federal Hall is a historic building at 26 Wall Street in the Financial District of Manhattan in New York City. The current Greek Revival–style building, completed in 1842 as the Custom House, is operated by the National Park Service as a national memorial called the Federal Hall National Memorial. The memorial is named after a Federal style building on the same site, completed in 1703 as City Hall.

2 Columbus Circle is a nine-story building on the south side of Columbus Circle in the Midtown Manhattan neighborhood of New York City. The building fills a small city block bounded by 58th Street, Columbus Circle, Broadway, and Eighth Avenue. It was originally designed by Edward Durell Stone in the modernist style for A&P heir Huntington Hartford. In the 2000s, Brad Cloepfil redesigned 2 Columbus Circle for the Museum of Arts and Design (MAD), which has occupied the building since 2008. 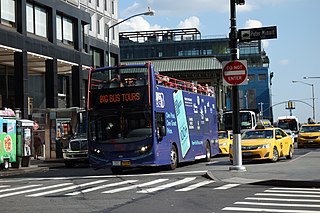 Whitehall Street is a street in the South Ferry/Financial District neighborhood of Lower Manhattan in New York City, near the southern tip of Manhattan Island. The street begins at Bowling Green to the north, where it is a continuation of the southern end of Broadway. Whitehall Street stretches four blocks to the southern end of FDR Drive, adjacent to the Staten Island Ferry's Whitehall Terminal, on landfill beyond the site of Peter Stuyvesant's 17th-century house.

The National Museum of the American Indian Act (NMAI) was enacted on November 28, 1989, as Public Law 101-185. The law established the National Museum of the American Indian as part of the Smithsonian Institution. The law also required the Secretary of the Smithsonian to prepare an inventory of all Indian and Native Hawaiian human remains and funerary objects in Smithsonian collections, as well as expeditiously return these items upon the request of culturally affiliated federally recognized Indian tribes and Native Hawaiian organizations.

Mario Martinez is a Native American contemporary abstract painter. He is a member of the Pascua Yaqui Tribe from New Penjamo, the smallest of six Yaqui settlements, in Arizona. He currently lives in New York City.

55 Wall Street, formerly known as the National City Bank Building, is an eight-story building on Wall Street between William and Hanover streets in the Financial District of Lower Manhattan in New York City, United States. The lowest three stories were completed in either 1841 or 1842 as the four-story Merchants' Exchange and designed by Isaiah Rogers in the Greek Revival style. Between 1907 and 1910, McKim, Mead & White removed the original fourth story and added five floors to create the present building. The facade and part of the interior are New York City designated landmarks, and the building is a National Historic Landmark listed on the National Register of Historic Places (NRHP). The building is also a contributing property to the Wall Street Historic District, listed on the NRHP. 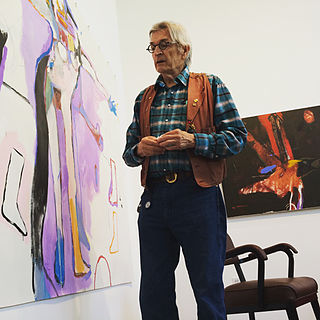 Richard Elmer "Rick" Bartow was a Native American artist and a member of the Mad River band of the Wiyot Tribe, who are indigenous to Humboldt County, California. He primarily created pastel, graphite, and mixed media drawings, wood sculpture, acrylic paintings, drypoint etchings, monotypes, and a small number of ceramic works.

Kingsland Homestead is an 18th-century house located in Flushing, Queens, New York City. It is the home of the remains of The Weeping Beech, a landmark weeping beech tree, believed to have been planted in 1847. The homestead is also close to the 17th-century Bowne House, the location of the first Quaker meeting place in New Amsterdam. The homestead is operated by the Queens Historical Society, whose quarters are inside; the homestead is open to the public as a museum. The Kingsland Homestead is a member of the Historic House Trust, and is both a New York City designated landmark and a National Register of Historic Places listing.

State Street is a short street in the Financial District of Manhattan, New York City. It runs west from Whitehall Street as a continuation of Water Street, then turns north at Battery Park to become its eastern border. Passing Pearl and Bridge Streets, it terminates at the northeast corner of the park, at Bowling Green, where the roadway continues north as Broadway and west as Battery Place.

Ska-ba-quay Tesson also known as A Ski Ba Qua and Mrs. Joseph Tesson) was a Meskwaki artist who is known for her textile art.