George Howard Herbig (January 2, 1920 – October 12, 2013) was an American astronomer at the University of Hawaii Institute for Astronomy. [1] He is perhaps best known for the discovery of Herbig–Haro objects. [2] [3]

Born in 1920 in Wheeling, West Virginia, [4] Herbig received his Ph.D in 1948 at the University of California, Berkeley; his dissertation is entitled A Study of Variable Stars in Nebulosity.

His specialty was stars at an early stage of evolution (a class of intermediate mass pre–main sequence stars are named Herbig Ae/Be stars after him) and the interstellar medium. He was perhaps best known for his discovery, with Guillermo Haro, of the Herbig–Haro objects; bright patches of nebulosity excited by bipolar outflow from a star being born.

A nebula is a distinct body of interstellar clouds. Originally, the term was used to describe any diffused astronomical object, including galaxies beyond the Milky Way. The Andromeda Galaxy, for instance, was once referred to as the Andromeda Nebula before the true nature of galaxies was confirmed in the early 20th century by Vesto Slipher, Edwin Hubble and others. Edwin Hubble discovered that most nebulae are associated by stars and illuminated by starlight. He also helped categorize nebulae based on the type of light spectra they produced. 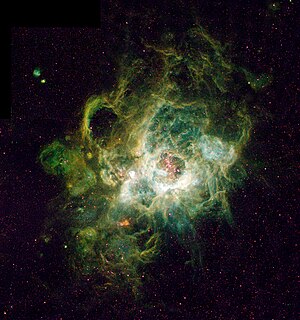 Messier 78 or M78, also known as NGC 2068, is a reflection nebula in the constellation Orion. It was discovered by Pierre Méchain in 1780 and included by Charles Messier in his catalog of comet-like objects that same year.

The Merope Nebula is a diffuse reflection nebula in the Pleiades star cluster, surrounding the 4th magnitude star Merope. It was discovered on October 19, 1859 by the German astronomer Wilhelm Tempel. The discovery was made using a 10.5cm refractor. John Herschel included it as 768 in his General Catalogue of Nebulae and Clusters of Stars but never observed it himself.

In astronomy, Bok globules are isolated and relatively small dark nebulae, containing dense cosmic dust and gas from which star formation may take place. Bok globules are found within H II regions, and typically have a mass of about 2 to 50 solar masses contained within a region about a light year or so across (about 4.5×1047 m3). They contain molecular hydrogen (H2), carbon oxides and helium, and around 1% (by mass) silicate dust. Bok globules most commonly result in the formation of double- or multiple-star systems.

NGC 1999 is a dust-filled bright nebula with a vast hole of empty space represented by a black patch of sky, as can be seen in the photograph. It is a reflection nebula, and shines from the light of the variable star V380 Orionis.

The Orion Molecular Cloud Complex is a star forming region with stellar ages ranging up to 12 Myr. Two giant molecular clouds are a part of it, Orion A and Orion B. The stars currently forming within the Complex are located within these clouds. A number of other somewhat older stars no longer associated with the molecular gas are also part of the Complex, most notably the Orion's Belt, as well as the dispersed population north of it. Near the head of Orion there is also a population of young stars that is centered on Meissa. The Complex is between 1 000 and 1 400 light-years away, and hundreds of light-years across.

Sh2-279 is an HII region and bright nebulae that includes a reflection nebula located in the constellation Orion. It is the northernmost part of the asterism known as Orion's Sword, lying 0.6° north of the Orion Nebula. The reflection nebula embedded in Sh2-279 is popularly known as the Running Man Nebula. 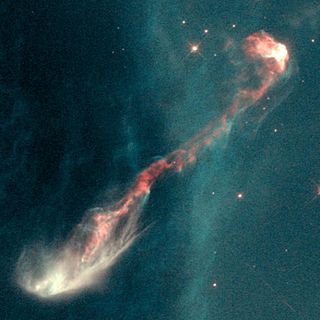 HH 46/47 is a complex of Herbig–Haro objects, located around 450 parsecs away in a Bok globule near the Gum nebula. Jets of partially ionized gas emerging from a young star produce visible shocks upon impact with the ambient medium. Discovered in 1977, it is one of the most studied HH objects and the first jet to be associated with young stars was found in HH 46/47. Four emission nebula, HH 46, HH 47A, HH 47C and HH 47D and a jet, HH 47B, have been identified in the complex. It also contains a mostly unipolar molecular outflow, and two large bow shocks on opposite sides of the source star. The overall size of the complex is about 3 parsecs.

V380 Ori is a young multiple star system located near the Orion Nebula in the constellation Orion, thought to be somewhere between 1 and 3 million years old. It lies at the centre of NGC 1999 and is the primary source lighting up this and other nebulae in the region.

IC 5146 is a reflection/emission nebula and Caldwell object in the constellation Cygnus. The NGC description refers to IC 5146 as a cluster of 9.5 mag stars involved in a bright and dark nebula. The cluster is also known as Collinder 470. It shines at magnitude +10.0/+9.3/+7.2. Its celestial coordinates are RA 21h 53.5m, dec +47° 16′. It is located near the naked-eye star Pi Cygni, the open cluster NGC 7209 in Lacerta, and the bright open cluster M39. The cluster is about 4,000 ly away, and the central star that lights it formed about 100,000 years ago; the nebula is about 12 arcmins across, which is equivalent to a span of 15 light years.

IC 349, also known as Barnard's Merope Nebula, is a nebula which lies 3500 AUs from the star Merope in the Pleiades cluster.

V1057 Cygni is a suspected binary star system in the northern constellation of Cygnus. It is a variable star of the FU Orionis-type, and was the second FU Orionis-type variable to be discovered. The system is located at a distance of approximately 3,000 light years from the Sun, in the North America Nebula. It has an apparent visual magnitude of around 12.4.

Scott Jay Kenyon is an American astrophysicist. His work has included advances in symbiotic and other types of interacting binary stars, the formation and evolution of stars, and the formation of planetary systems. 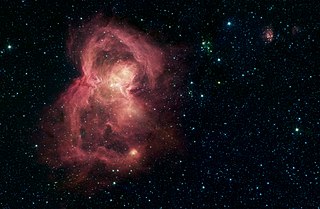 Westerhout 40 or W40 is a star-forming region in the Milky Way located in the constellation Serpens. In this region, interstellar gas forming a diffuse nebula surrounds a cluster of several hundred new-born stars. The distance to W40 is 436 ± 9 pc, making it one of the closest sites of formation of high-mass O-type and B-type stars. The ionizing radiation from the massive OB stars has created an H II region, which has an hour-glass morphology. 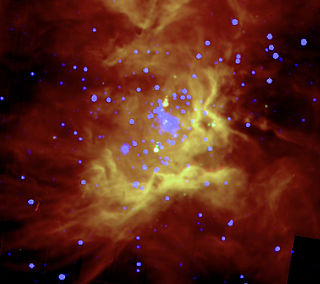 RCW 36 is an emission nebula containing an open cluster in the constellation Vela. This H II region is part of a larger-scale star-forming complex known as the Vela Molecular Ridge (VMR), a collection of molecular clouds in the Milky Way that contain multiple sites of ongoing star-formation activity. The VMR is made up of several distinct clouds, and RCW 36 is embedded in the VMR Cloud C. 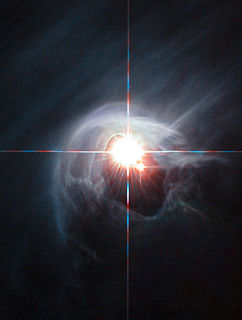 DI Chamaeleontis, also known as Hen 3-593 or HIP 54365, is a quadruple star system in the constellation Chamaeleon. The system is roughly 700 light years from Earth. 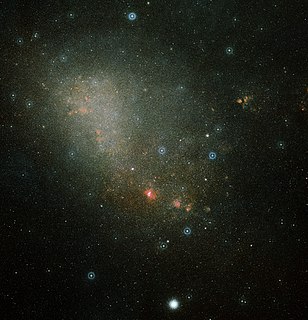 SMC 018136, also known as PMMR 37, is a red supergiant star located in the Small Magellanic Cloud. It is one of the largest stars and one of most luminous SMC cool supergiants so far discovered, with a radius of 1,310 times that of the sun and a bolometric luminosity over 200,000 times more than Sun. If it were in the place of the Sun, its photosphere would at least engulf the orbit of Jupiter.