George Scott Martin (14 July 1899 – 11 december 1972) was a Scottish football player and manager whose position was inside forward. He won an English Football League winner's medal with Everton in 1928, and served Luton Town as a player and manager.

Martin started his career in Scotland with Hamilton Academical before moving south to join Hull City, [2] [3] where he made 218 total appearances and scored 58 goals. [4]

He was signed by Everton in the latter stages of the 1927–28 season and made ten appearances in their ultimately successful title run in to earn his only major honour in the game, the Football League Championship. Martin's time at Goodison Park was mixed however as he spent the majority of his time as a fringe player during the club's relegation in 1930 and promotion again in 1931, before finally making just two appearances in Everton's 1932 title-winning side, which was not sufficient to earn a medal. [5]

Martin left Everton for a short spell at Middlesbrough and then finished his playing career at Luton Town (105 total appearances, 29 goals) [4] before moving into management.

Martin became a coach at Luton Town in August 1939, and was appointed manager on 4 December 1944. After guiding Luton through their first post-war season, he was appointed as Newcastle United's first manager since the end of World War II in May 1947. One of his decisions at the club was surprisingly to sell prolific goalscorer and fans' favourite Len Shackleton to Sunderland for £13,000. This concerned some supporters and Martin was at first criticised for making this move. [6] However the protests were short-lived as Newcastle gained promotion without Shackleton and other popular players were introduced – these included the club's current second highest all-time goal-scorer, Jackie Milburn.

George Martin resigned from Newcastle in 1950 after establishing them as a top six side in the First Division and took over at struggling Aston Villa. Martin was succeeded by Eric Houghton.

He later returned to Luton for a short-lived spell in 1965; he left a year later.

Kevin Mark Sheedy is an Irish former footballer. He is the current manager of League of Ireland Premier Division side Waterford.

Michael Colin Newell is an English football manager and former professional footballer, who is assistant manager of League of Ireland Premier Division side Waterford.

Bryan Hamilton is a Northern Irish former professional football player and manager. He gained 50 caps for Northern Ireland between 1969 and 1980, and later managed the national team for four years. He later became Technical Director at Antigua Barracuda F.C., which no longer exists, having been dissolved in 2014.

George Edward Pilkington is an English former professional footballer. During his playing career he was a defender, and made 647 league and cup appearances across a 16-year professional career in the English Football League and National League.

George Stobbart was an English footballer who played for Middlesbrough, Newcastle United, Luton Town, Millwall and Brentford during his career. As of October 2015 he is Brentford's quickest-ever goalscorer, having netted after just ten seconds of a Division Three (South) match versus Aldershot in November 1954.

David Mills is an English former footballer most notable for his career with Middlesbrough and becoming England's first half-million pound footballer. 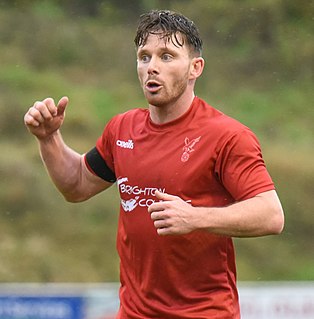 John Paul Kissock is an English association footballer who last appeared as player-assistant manager at Whitehawk. He plays as a midfielder.

Mark Cullen is an English professional footballer who plays as a striker for League Two club Port Vale.

Joseph Donnachie was a Scottish professional footballer. An outside left or outside right, he played in the Football League for Newcastle United, Everton, Oldham Athletic and Blackpool.