George W. "Tank" McLaren (August 29, 1896 – November 13, 1967) was an American football and basketball player and coach. Playing at the University of Pittsburgh under legendary football coach Pop Warner, McLaren was an All-American in 1917 and 1918. During his playing career, he was never stopped for a loss on a running play. McLaren served as head football coach at Emporia State University, then known as Kansas State Normal College, (1919), the University of Arkansas (1920–1921), the University of Cincinnati (1922–1926), and the University of Wyoming (1927–1929), compiling a career record of 32–55–8. He also coached basketball at Wyoming for two seasons (1928–1930), tallying a mark of 28–10. McLaren was inducted into the College Football Hall of Fame as a player in 1965.

McLaren grew up in Pittsburgh, Pennsylvania where he attended and graduated from Peabody High School. He played football at Peabody and competed in several other sports including track, basketball, and swimming. [1]

McLaren attended the University of Pittsburgh, where he was considered one of the greatest all-around athletes that Pitt ever produced. [1] In addition to being a football All-American, he was also a two-year member of the basketball and track teams. [2] McLaren played four varsity seasons as fullback at Pittsburgh from 1915 to 1918. While playing for the Panthers he only lost one game while winning thirty decisions. He was a member of three national championship-winning teams under head coach Glenn "Pop" Warner. In 1916, the Panthers beat several national powers while not giving up a single point. During the next two seasons McLaren won All-America honors. In 1917 season, McLaren helped the Panthers to a 10–0 record. That season, he established single season school records when he scored 13 touchdowns and rushed for 782 yards including a then record 91-yard touchdown against Syracuse University.

Pitt's undefeated 1917 team was known as "The Fighting Dentists" because on occasion every position was filled by dental students. [3] The dental students on the 1917 team included McLaren, [4] Katy Easterday, [5] Skip Gougler, [6] "Jake" Stahl, [7] and Jock Sutherland. [8]

In 1918, his senior season, he served as Captain of the Panther football team and was also president of his senior class. [9] He still ranks among the University of Pittsburgh all-time leaders in both scoring (183 points) and rushing (1,920 yards). One of McLaren's most noted achievements was that he was never stopped for a loss on a running play. [2]

After his coaching career, McLaren worked in the industrial relations division of a company in Baltimore. He was inducted into the National Football Foundation's College Football Hall of Fame in 1965. [9]

John Bain "Jock" Sutherland was an American football player and coach. He coached college football at Lafayette College (1919–1923) and the University of Pittsburgh (1924–1938) and professional football for the Brooklyn Dodgers (1940–1941) and Pittsburgh Steelers (1946–1947). He was inducted into the College Football Hall of Fame in 1951. 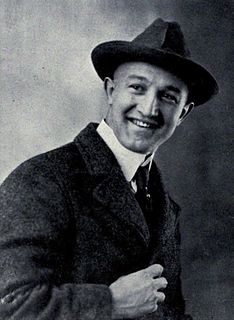 Homer Woodson "Bill" Hargiss was an American football and basketball player, and track and field athlete, and coach in Kansas and Oregon. He was an early innovator in football and was known to be one of the first coaches to use the forward pass and the huddle.

The Pittsburgh Panthers football program is the intercollegiate football team of the University of Pittsburgh, often referred to as "Pitt", in Pittsburgh, Pennsylvania. Traditionally the most popular sport at the university, Pitt football has played at the highest level of American college football competition, now termed the NCAA Division I Football Bowl Subdivision, since the beginning of the school's official sponsorship of the sport in 1890. Pitt competes as a member of the Atlantic Coast Conference (ACC).

Harold Edward "Bud" Elliott was an American football coach. He served as the head coach at Southwestern College in Winfield, Kansas (1964–1968), Washburn University (1969–1970), Kansas State Teachers College—now known as Emporia State University (1971–1973), the University of Texas at Arlington (1974–1983), Northwest Missouri State University (1988–1993), and Eastern New Mexico University (1994–2004), compiling a career college football record of 205–179–9. Elliott won more games than any other head coach in the history of Eastern New Mexico Greyhounds football program. He coached football at high school and collegiate levels for over 40 years. In his last season of coaching in 2004, Elliott became the 46th head coach in NCAA football history to reach 200 wins. At the time of his retirement, he ranked third in victories among active NCAA Division II coaches.

Larry Ronald Kramer was an American football player and coach of football and baseball. He played college football at University of Nebraska–Lincoln, where he was consensus selection at tackle to the 1964 College Football All-America Team. Kramer served as the head football coach at Southern Oregon College—now known as Southern Oregon University—in Ashland, Oregon from 1970 to 1971, Austin College in Sherman, Texas from 1973 to 1982, and Emporia State University in Emporia, Kansas from 1983 to 1994, compiling career college football coaching record of 124–115–5. He led his 1981 Austin team to a share of the NAIA Division II Football National Championship.

Arthur St. Leger "Texas" Mosse was an American football player and coach and the 9th head football coach of the Pittsburgh Panthers and the 13th head football coach for the University of Kansas Jayhawks. While at Pittsburgh, he coached the university to its first undefeated season (10–0) in 1904. Mosse also played professional football for the Homestead Library & Athletic Club in 1901.

The Emporia State Hornets football program is a college football team that represents Emporia State University, often referred to as "Emporia State" or "ESU". The team competes as a member of the Mid-America Intercollegiate Athletics Association (MIAA), which is a conference in the Division II of the National Collegiate Athletic Association (NCAA). The program began in 1897 and has fifteen conference titles. On December 15, 2006, former Hornet quarterback Garin Higgins became the team's 24th head coach, following the resignation of Dave Wiemers. Home games are played on Jones Field at Welch Stadium, located on the Emporia State University campus in Emporia, Kansas. In August 2017, Hero Sports named Emporia State the "best football team in Kansas, regardless of division." 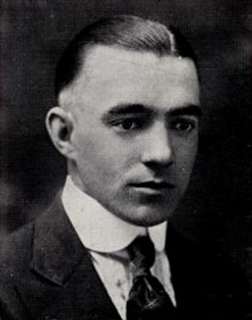 Roscoe A. "Skip" Gougler was an American football player and coach, dentist, and professor of dentistry. He played at the halfback and quarterback positions for the Pittsburgh Panthers football teams from 1914 to 1918. He was selected as a second-team All-American in 1918. He also played two years of professional football, including the 1919 season with the Massillon Tigers of the Ohio League. He later coached football and became a member of the faculty at the University of Pittsburgh’s dentistry school.

Edward Adam "Jake" Stahl was an American football player and coach. He played guard and tackle positions for the Pittsburgh Panthers football teams from 1915 to 1918. He was selected as a second-team All-American in 1918. He also played professional football from 1920 to 1921. Stahl served as the head football coach at Duquesne University from 1920 to 1921, compiling a record of 3–7–2.

The 1916 Pittsburgh Panthers football team was an American football team represented the University of Pittsburgh as an independent during the 1916 college football season. Led by coach Pop Warner, the Panthers won all eight games and outscored their opponents by a total of 255 to 25. The team was retroactively selected as the national champion by multiple NCAA-designated major selectors, including the Billingsley Report, Helms Athletic Foundation, Houlgate System, and National Championship Foundation, and by others as a co-national champion with Army by Parke H. Davis.

The 1915 Pittsburgh Panthers football team represented the University of Pittsburgh in the 1915 college football season. In his first season with the program, head coach Pop Warner led the Panthers to wins in all eight games and they outscored their opponents by a combined total of 247–19. Home games were held at Forbes Field, the ballpark of baseball's Pittsburgh Pirates.

The 1917 Pittsburgh Panthers football team represented the University of Pittsburgh in the 1917 college football season. Led by coach Pop Warner, the Panthers won all ten games and outscored their opponents by a combined total of 260–31.

The Emporia State Hornets basketball team represents Emporia State University in Emporia, Kansas, in the NCAA Division II men's basketball competition. The team is coached by Craig Doty, who is in his first season as head coach. The Hornets currently compete in the Mid-America Intercollegiate Athletics Association.