George Almond Munger (June 24, 1909 – July 21, 1994) was an American athlete, coach and athletic director. He played college football and competed in track and field at the University of Pennsylvania from 1930 to 1933. He returned to Penn as head coach of the football team from 1938 to 1953 and as director of physical education from 1954 to 1974. His 1945 and 1947 teams finished ranked among the top ten college football teams in the United States, and he coached five players who were inducted into the College Football Hall of Fame and three who received the Maxwell Award as the best player in college football. Munger was inducted in the College Football Hall of Fame in 1976. The Maxwell Football Club has present the George Munger Award each year since 1989 to the national college football coach of the year.

Munger was born in Elkins Park, Pennsylvania in 1909. His father, Herbert N. Munger, was the co-owner of the Munger & Long department store in Camden, New Jersey. [1] Munger received his early education at the Friends School in Camden. He received his preparatory education at The Hill School in Pottstown, Pennsylvania and the Episcopal Academy in the Overbrook section of Philadelphia. [1] He was the captain of the football team at Episcopal Academy in 1928 and 1929. He led Episcopal to two undefeated seasons in football and once scored eight touchdowns in a game. [2] He also helped lead Episcopal to two basketball championships and a baseball championship. He also set school records in the pole vault, high jump, discus and javelin. [3]

He later attended the University of Pennsylvania where he played at the halfback for the Penn Quakers football team from 1930 to 1932. He also competed for Penn in track and field and won the decathlon at the 1932 Penn Relays. [4] With the Penn Relays being comparable to the Olympic Trials, Munger should have been a lock for the 1932 Olympics. But citing a lack of depth in the 1932 Relays field, another Olympics Trials were held in Chicago. Munger failed to clear a starting 12-foot height in the pole vault, finished ninth, and was named an alternate to the squad. [5] [6]

Teacher and coach at Episcopal Academy

Coach and administrator at Penn

Munger coached 16 All-American football players at Penn, and three of his players, Robert H. Odell (1943), Chuck Bednarik (1948) and Reds Bagnell (1950), won the Maxwell Award as the best college football player in the United States. [3] Five of his players have been inducted into the College Football Hall of Fame: Odell, Bednarik, Bagnell, Skip Minisi, and George Savitsky. [12]

During the Munger era, Penn regularly drew crowds of 75,000 to home games at Franklin Field. Munger's teams led the nation in attendance between 1938 and 1942 with 1.78 million fans. The Daily Pennsylvanian later wrote, "The Munger era represented the heyday of Quaker football." [11]

After resigning as the football coach, Munger served as the director of physical education at Penn from 1954 to 1974. He was also a vice-president of the National Football Foundation and the Maxwell Club, president of the American Football Coaches Association, and a member of the U.S. Olympic Equestrian Committee and physical fitness committees under Presidents Franklin Roosevelt, Dwight Eisenhower, and John F. Kennedy. [12] During the summers from 1952 to 1976, he was Director of Camp Tecumseh, a boy's camp in Center Harbor, N.H. founded by three former Olympians in 1903. [14]

Munger was inducted into the College Football Hall of Fame in 1976. [12] Munger's biography at the Hall of Fame describes him as "a superb, relaxed athlete, an innovative coach, and a meticulous administrator." [12] The University of Pennsylvania also named its football training complex, the George Munger Training Complex, after him, and the Munger Award is given each year to the most valuable player on the Penn football team. [11]

In 1989, the Maxwell Football Club began awarding the George Munger Award to the college football coach of the year. [15] In its description of the award, the Maxwell Club says of Munger, "His devotion to ethics in athletics, and his commitment to education is the standard for which all college coaches should strive." [15] Recipients of the award include Bo Schembechler, Joe Paterno, Lloyd Carr, Bob Stoops, Pete Carroll, and Urban Meyer. In March 2010, the club announced that the award would be renamed the Joseph V. Paterno Award. [16]

Munger died from heart failure in July 1994 at age 84. [2] [17] He was survived by his wife Viola, daughter Carol Ober and four grandchildren. [11] At the time of Munger's death, Chuck Bednarik told The Philadelphia Inquirer, "[Munger] taught me a secret – the secret of how to approach life. He was a jovial man who would always laugh and act young. When I saw him a few years ago, it was like he had never changed, like he was in his '40s." [11] 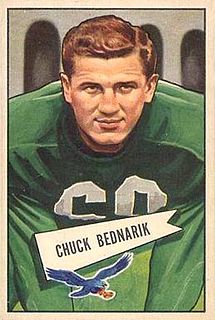 Charles Philip Bednarik, nicknamed "Concrete Charlie", was an American professional football player in the National Football League (NFL). He was one of the most devastating tacklers in the history of the NFL and its last 60-minute man, or full-time two-way player. A Slovak American from the Lehigh Valley region of Pennsylvania, Bednarik played for the Philadelphia Eagles from 1949 through 1962 and, upon retirement, was inducted into the Pro Football Hall of Fame in 1967, his first year of eligibility. 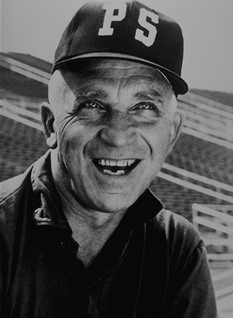 Charles A. "Rip" Engle was an American football player and coach of football and basketball. He served as the head football coach at Brown University from 1944 to 1949 and at Pennsylvania State University from 1950 to 1966, compiling a career college football record of 132–68–8. Engle was also the head basketball coach Western Maryland College–now known as McDaniel College–during the 1941–42 season at Brown from 1942 to 1946, tallying a career college basketball mark of 53–55. He was inducted into the College Football Hall of Fame as a coach in 1973.

James Joseph O’Hora was an American college football coach for over 30 years. 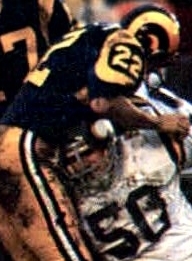 Keith Robert Dorney is a former American college and professional football player who was an offensive lineman in the National Football League (NFL) for nine seasons in the 1970s and 1980s. He played college football for Pennsylvania State University, and received All-American honors. Dorney was chosen in the first round of the 1979 NFL Draft, and played for the NFL's Detroit Lions during his entire professional career.

The Maxwell Football Club was established in 1935 to promote safety in the game of American football. Named in honor of Robert W. (Tiny) Maxwell, legendary college player, official, and sports columnist, the club was founded by his friend Bert Bell, then owner of the Philadelphia Eagles professional football team and later commissioner of the National Football League (NFL). The awards are presented during the spring of the following year. 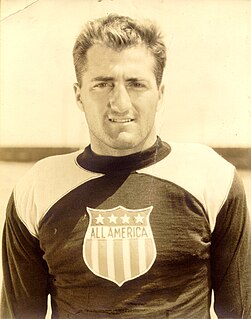 John Francis "Count" Orsi was an American football player and coach. He played college football at Colgate University and an end. He was inducted into the College Football Hall of Fame in 1982.

George Michael Savitsky was an American football offensive tackle in the National Football League for the Philadelphia Eagles.

Francis Xavier "Frank" Reagan was an American football player, coach, and college athletics administrator. He played professionally for the New York Giants and the Philadelphia Eagles during a seven-season National Football League (NFL) career that spanned from 1941 to 1951. Reagan served as the head football coach at Villanova University from 1954 to 1959, compiling a record of 16–36. He was also Villanova's athletic director from 1957 to 1961.

Tom Gilmore is an American football coach and former player. He is currently the head coach of the Lehigh University Mountain Hawks.

The George Munger Award is presented to the NCAA Division I college football coach of the year by the Maxwell Football Club. The award was named after former University of Pennsylvania head coach George Munger. People who voted for the winners of the award included NCAA head coaches, members of the Maxwell Club, and sportswriters from all over the country.

Joe William Valerio is a former American football offensive lineman. He was in the second round of the 1991 NFL draft by the Kansas City Chiefs. He played college football at Penn.

The Joseph V. Paterno Award was a coaching award that was awarded to Frank Beamer in 2010. Originally the award was intended to be awarded annually to the college football head coach who best exemplified "Penn State head coach Joe Paterno’s dedication to the development of student-athletes and the advancement of the university beyond just athletics".

The 1947 Penn Quakers football team was an American football team that represented the University of Pennsylvania during the 1947 college football season. In its tenth season under head coach George Munger, the team compiled a 7–0–1 record, outscored opponents by a total of 219 to 35, and was ranked No. 7 in the final AP Poll. The team's lone setback was a 7–7 tie with Army.