Harlech was the son of William Richard Ormsby-Gore, 2nd Baron Harlech, and Lady Emily Charlotte Seymour, and was educated at Eton College and the Royal Military College, Sandhurst. [1] [2]

He served in the regular army as a lieutenant in the Coldstream Guards from 1875 to 1883. He later served in the Shropshire Yeomanry, becoming its commanding officer as lieutenant-colonel from 1902 to 1907, and was honorary colonel from 1908. He commanded the Welsh Guards at home during the First World War in 1915. [3] He was chairman of the Salop Territorial Army Association. [1]

He was elected to the House of Commons for Oswestry in a by-election in May 1901, [4] a seat he held until 1904 when he succeeded his father as third Baron Harlech and entered the House of Lords. [1]

Lord Harlech was a justice of the peace for both County Leitrim and Shropshire and High Sheriff of Leitrim for 1885. He was appointed to be a deputy lieutenant of Merionethshire in 1896 [5] and of Shropshire in 1897. [6]

Harlech was also awarded the Knight of the Order of St John of Jerusalem [ citation needed ] From 1926 to 1938 he was served as Provincial Grand Master of Freemasonry in Shropshire and was a member of the Lodge of St. Oswald (No. 1124), which is now also known as the Harlech Lodge of Perfection.[ citation needed ]

Harlech died in May 1938, aged 83, and was succeeded in the barony by his son. Lady Harlech died in 1950. [14] The couple are buried in the parish churchyard of Selattyn near Oswestry. Their southern English home was Tetworth Hall at Ascot in Berkshire.[ citation needed ]

Baron Harlech, of Harlech in the County of Merioneth, is a title in the Peerage of the United Kingdom. It was created in 1876 for the Conservative politician John Ormsby-Gore, with remainder to his younger brother William. He had previously represented Carnarvon and North Shropshire in the House of Commons. Ormsby-Gore was the eldest son of William Ormsby-Gore, Member of Parliament for County Leitrim, Carnarvon and North Shropshire, and the great-great-great-grandson of William Gore, third and youngest son of Sir Arthur Gore, 1st Baronet, of Newtown, second son of Sir Paul Gore, 1st Baronet, of Magharabag, whose eldest son Paul was the grandfather of Arthur Gore, 1st Earl of Arran.

Francis David Ormsby-Gore, 6th Baron Harlech, was a peer in the United Kingdom.

William Ormsby-Gore, known as William Gore until 1815, was a British Member of Parliament.

This article is about the particular significance of the year 1860 to Wales and its people. 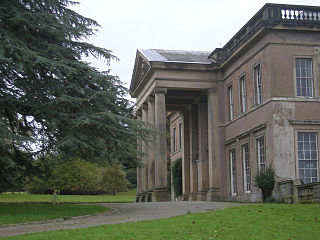 Brogyntyn, or Porkington, is a mansion in the parish of Selatyn to the north-west of Oswestry in Shropshire, England. Brogyntyn Hall was the home of the Ormsby-Gore family from 1815, and had previously been the estate of their ancestors the Maurices and Owens since the sixteenth century. It was abandoned and uninhabited from around 1985.

Francis Richard John Sandford, 1st Baron Sandford,, known as Sir Francis Sandford between 1863 and 1891, was a British civil servant. He was Permanent Under-Secretary of State for the Committee of Council on Education between 1870 and 1884, in which role he was instrumental in implementing the Elementary Education Act of 1870.

Major-General The Honourable Sir Frederick Gordon, was a senior British Army officer, who additionally served as a major general in the early Royal Air Force.