George Rodney Willis (August 11, 1879 – January 22, 1960), was an American architect associated with the Prairie School and the Oak Park, Illinois studio of Frank Lloyd Wright who thereafter had a successful career in California and in Texas.

George Willis was born in Chicago, Illinois, on August 11, 1879, to Byron and Mary (Rodney) Willis. George was the third of four children. His mother was a descendant of Caesar Rodney, who cast Delaware's vote for the Declaration of Independence. [1]

Education and Architectural Practice in Chicago

Willis attended Chicago public schools and enrolled in the Art Institute of Chicago in 1899, affiliated with the Armour Institute (now Illinois Institute of Technology). In his last year of school Willis began working in the Oak Park, Illinois, studio of architect Frank Lloyd Wright, for whom he served as draftsman for four years, rising to the position of head draftsman. During his years with Wright, he worked with draughtsmen and architects who were important practitioners of Prairie School architecture, including Barry Byrne, William Eugene Drummond, Marion Mahony, Isabel Roberts and Walter Burley Griffin. As Wright's son John Lloyd Wright recorded:

William Drummond, Francis Barry Byrne, Walter Burley Griffin, Albert McArthur, Marion Mahony, Isabel Roberts and George Willis were the draftsmen. Five men, two women. They wore flowing ties, and smocks suitable to the realm. The men wore their hair like Papa, all except Albert, he didn't have enough hair ... I know that each one of them was then making valuable contributions to the pioneering of the modern American architecture for which my father gets the full glory, headaches and recognition today! [2]

Willis moved to California in 1904 and worked for Myron Hunt. Projects on the boards during the time that Willis worked with Hunt and his partner Elmer Grey include:the Edith Daniels House, in Aradia, CA (1904), the Livingston Jenks House, San Rafael, CA (1904), the Astronomer's House (aka The Monastery) and other buildings, at the Mount Wilson Observatory, Mount Wilson, CA (1904), the Thomas H. Foote House, East Colorado Street, Pasadena, CA (1905), and the J.W. Gillespie House, in Montecito, CA.

Then, Willis moved to Dallas, and formed a partnership with Stewart Moore in 1906. From 1907 to 1909 he worked with J. Edward Overbeck in a practice known as Overbeck and Willis. They collaborated on the expansive J. T. Trezevant House along Turtle Creek of 1907, providing Dallas with one of the two most imposing Prairie houses in Texas. [3] In 1910 Willis was practicing alone in Dallas.

Among Willis' San Antonio works are the Lawrence T. Wright house (1914-1917), houses in Alamo Heights and Monte Vista, and a grouping of four small apartments at the corner of Bandera Road and E. Skyview, providing fine Texas example of Prairie School architecture. In 1928 he designed the Milam Building. It was the first office building in the United States with built in air conditioning when constructed and the tallest brick and reinforced concrete structure in the United States when it opened. It was also the first high-rise air-conditioned office building in the United States [5] [6] [7] The air-conditioning design team was led by Willis H. Carrier, founder of the Carrier Engineering Corporation. [8]

Willis met his future wife, Louise Scott, about 1918 in San Antonio. They had no children. Willis was a member of the West Texas chapter of the American Institute of Architects. He maintained his office in the Smith-Young Tower until his death on January 22, 1960. [1]

The year 1928 in architecture involved some significant architectural events and new buildings.

Marion Mahony Griffin was an American architect and artist. She was one of the first licensed female architects in the world, and is considered an original member of the Prairie School. Her work in the United States developed and expanded the American Prairie School. Her work in India and Australia reflected Prairie School ideals of indigenous landscape and materials in the newly formed democracies. The scholar Deborah Wood has stated that Griffin "did the drawings people think when they think Frank Lloyd Wright ." During her career, she produced some of the best architectural drawing in America and was instrumental in envisioning the design plans for then new capital city of Australia, Canberra. 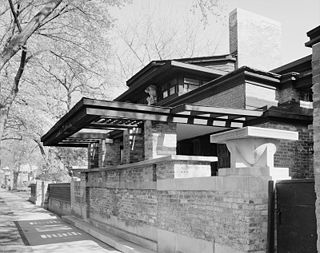 Prairie School is a late 19th- and early 20th-century architectural style, most common in the Midwestern United States. The style is usually marked by horizontal lines, flat or hipped roofs with broad overhanging eaves, windows grouped in horizontal bands, integration with the landscape, solid construction, craftsmanship, and discipline in the use of ornament. Horizontal lines were thought to evoke and relate to the wide, flat, treeless expanses of America's native prairie landscape.

James Riely Gordon was an architect who practiced in San Antonio until 1902 and then in New York City, where he established a national reputation. J. Riely Gordon is best known for his landmark county courthouses, in particular those in Texas. Working during the state's "Golden Age" (1883–1898) of courthouse construction, Gordon saw 18 of his designs erected from 1885 to 1901; today 12 remain. 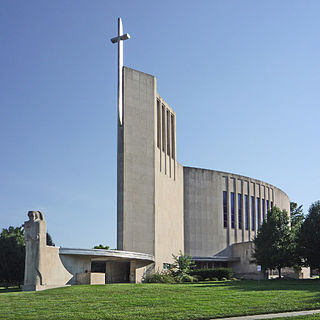 Francis Barry Byrne was initially a member of the group of architects known as the Prairie School. After the demise of the Prairie School about 1914 to 1916, Byrne continued as a successful architect by developing his own personal style. 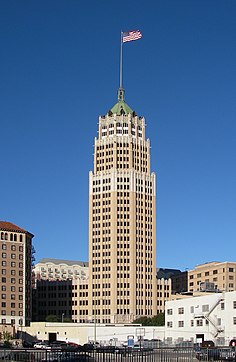 The architecture of the U.S. state of Texas comes from a wide variety of sources. Many of the state's buildings reflect Texas' Spanish and Mexican roots; in addition, there is considerable influence from mostly the American South as well as the Southwest. Rapid economic growth since the mid twentieth century has led to a wide variety of contemporary architectural buildings. 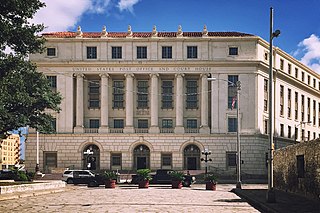 The Hipolito F. Garcia Federal Building and United States Courthouse is a historic courthouse, federal office, and post office building located in Downtown San Antonio in Bexar County in the U.S. state of Texas. It was formerly the U.S. Post Office, Federal Office Building and Courthouse. It is the courthouse for the United States District Court for the Southern District of Texas. It holds a prominent location on Alamo Plaza, across from the Alamo. The building is listed on the National Register of Historic Places as San Antonio U.S. Post Office and Courthouse. 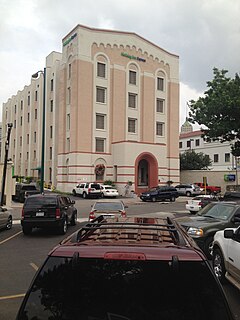 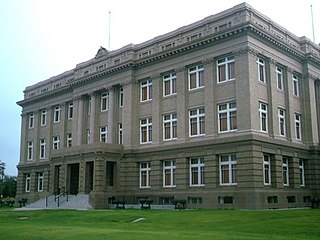 The Cameron County Courthouse is a historic building located at 1150 East Madison Street in Brownsville, Cameron County, Texas. It was designed by architect Atlee B. Ayres in the Classical Revival style of architecture. Built between 1912 and 1914 by Gross Construction Company as the second court house of Cameron County, it served as such until 1914 when the 1979 courthouse was completed in the 900 block of East Harrison Street. Its relatively plain exterior belies the grandeur of the art glass dome above its central rotunda. On September 27, 1980, it was added to the National Register of Historic Places. Between 1994 and 2006, the building was completely renovated at a cost of over $17 million. It was rededicated on October 17, 2006. Sometimes called the Dancy Building in honor of County Judge Oscar Cromwell Dancy, who championed its construction in 1912, it now houses the Cameron County Court at Law No. 1 as well as county offices.

Lang & Witchell was a prominent architectural firm in Dallas, Texas, active from 1905 to 1942. 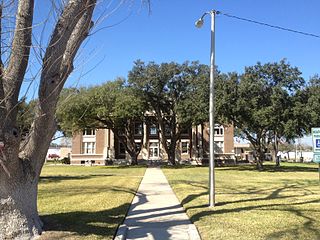 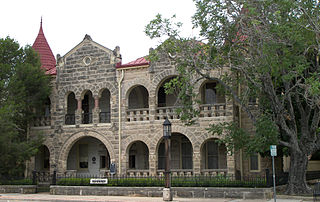 Eugene Thomas Heiner was an American architect who designed numerous courthouses, county jails, and other public buildings in Texas. He was born in New York City, apprenticed in Chicago, and studied further in Germany. 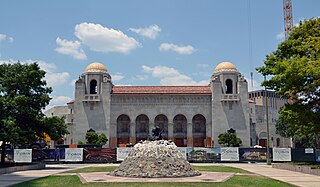 At 280 feet (90 m), the 21-story Milam Building in downtown San Antonio, Texas was the tallest brick and reinforced concrete structure in the United States when it opened in 1928, as well as the first high-rise air-conditioned office building. The building was designed by George Willis, engineered by M.L. Diver, and constructed by L.T. Wright and Company. The building was named in honor of the Republic of Texas historical figure Benjamin Milam, noted for his leadership during the Texas Revolution. In keeping with that motif, the only flag that flies atop the tower is the Lone Star flag.

James E. Flanders was an American architect. He designed houses, courthouses and Masonic buildings in Texas, many of which are listed on the National Register of Historic Places.