George Sprague Myers (February 2, 1905 – November 4, 1985) was an American ichthyologist who spent most of his career at Stanford University. He served as the editor of Stanford Ichthyological Bulletin as well as president of the American Society of Ichthyologists and Herpetologists. Myers was also head of the Division of Fishes at the United States National Museum, and held a position as an ichthyologist for the United States Fish and Wildlife Service. He was also an advisor in fisheries and ichthyology to the Brazilian Government.

He was a prolific writer of papers and books and is well known to aquarists as the man who first described numerous popular aquarium species such as the flame tetra ( Hyphessobrycon flammeus ), the black-winged hatchetfish (Carnegiella marthae), the ram cichlid (Microgeophagus ramirezi) and, most notably, the neon tetra. He also erected the genera Aphyosemion and Fundulopanchax , which include dozens of widely kept killifish species. He is perhaps best known to aquarists for his collaborations with William T. Innes who wrote the classic book Exotic Aquarium Fishes. Myers served as the scientific consultant for this seminal work in the aquarium literature and, after Innes retired, served as the editor for later editions. When Myers described the neon tetra in 1936, he named it Hyphessobrycon innesi in honor of Innes. The species was later moved to the genus Paracheirodon and is now known as Paracheirodon innesi.

The neon tetra is a freshwater fish of the characin family of order Characiformes. The type species of its genus, it is native to blackwater and clearwater streams in the Amazon basin of South America. Its bright colouring makes the fish visible to conspecifics in the dark blackwater streams, and is also the main reason for its popularity among freshwater fish hobbyists.

Geomyersia is a small genus of skinks, lizards in the family Scincidae. The genus is endemic to the Bismarck Archipelago and the Solomon Islands.

The cardinal tetra is a freshwater fish of the characin family of order Characiformes. It is native to the upper Orinoco and Negro Rivers in South America. Growing to about 3 cm (1.2 in) total length, the cardinal tetra has the striking iridescent blue line characteristic of the genus Paracheirodon laterally bisecting the fish, with the body below this line being vivid red in color, hence the name "cardinal tetra". The cardinal tetra's appearance is similar to that of the closely related neon tetra, with which it is often confused; the neon's red coloration extends only about halfway to the nose, and the neon's blue stripe is a less vibrant blue. 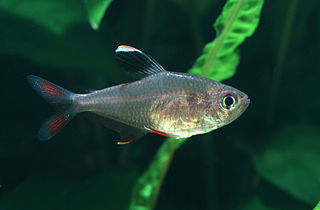 Tetra is the common name of many small freshwater characiform fishes. Tetras come from Africa, Central America, and South America, belonging to the biological family Characidae and to its former subfamilies Alestidae and Lebiasinidae. The Characidae are distinguished from other fish by the presence of a small adipose fin between the dorsal and caudal fins. Many of these, such as the neon tetra, are brightly colored and easy to keep in captivity. Consequently, they are extremely popular for home aquaria. 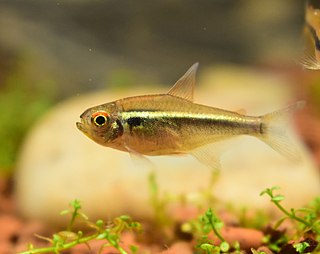 The black neon tetra is a freshwater fish of the characin family of order Characiformes. It is native to the Paraguay basin of southern Brazil. They are often found in the aquarium trade.

Tropical Fish Hobbyist Magazine is a bimonthly magazine geared to hobbyist keepers of tropical fish, with news and information on a variety of topics concerning freshwater and marine aquariums. The magazine was first published in September 1952. The magazine is based in Neptune City, New Jersey. It is published by TFH Publications, which publishes books relating to the care aquarium fish and pets. Since 2015, publication format has shifted from primarily printed to digital publication, known as TFH Digital. 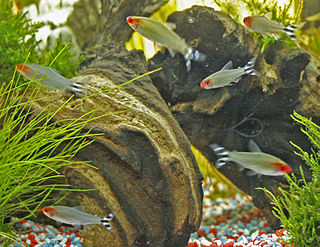 The rummy-nose tetra is a species of tropical freshwater characin fish originating in South America, popular among fishkeepers as an aquarium fish. One of many small tetras belonging to the same genus, it is on average 5 cm (2 in) long when fully grown, and is a long established favourite among tropical fishkeepers. The fish is one of several very similar species including Hemigrammus bleheri, and Petitella georgiae, and it is possible that more recently collected specimens available in the aquarium trade are members of one or other of these similar species. The common name applied to most of these fishes is "rummy-nose tetra", though other common names are in circulation.

The flame tetra, also known as the red tetra or Rio tetra, is a small freshwater fish of the characin family Characidae. This tetra was first introduced as aquarium fish in 1920 by C. Bruening, Hamburg, Germany, and formally described in 1924 by Dr. George S. Myers. Today large numbers are bred in captivity and it is common in the aquarium trade, but the remaining wild population in Southeast Brazil is highly threatened.

William Thornton Innes III, L.H.D. was an American aquarist, author, photographer, printer and publisher. Innes was the author of numerous influential books and hundreds of articles about aquarium fish, aquatic plants and aquarium maintenance during the formative years of the aquarium hobby in America. Born in Philadelphia, he was the founder, publisher and editor of The Aquarium, the first successful national magazine on the subject of keeping freshwater tropical fishes. The magazine ran monthly for thirty-five years from May 1932 through January 1967.

The ember tetra is a freshwater fish of the characin family of order Characiformes. It is native to the Araguaia River basin of Brazil and was discovered in 1987 and named in honor of the fish explorer Heiko Bleher's mother.

Jacques Géry was a French ichthyologist. He was also a scientist and a Doctor of Medicine.

Project Piaba is a fishery initiative located on the Rio Negro tributary of the Amazon river. The program both promotes and researches sustainable aquarium pet fish collection and its impact on the environment. The name of the project comes from the Brazilian Portuguese word, piaba, which means "little fish", referring specifically to the cardinal tetra. Project Piaba is an ongoing project with annual research expeditions to the Rio Negro region. Because of the sustainable nature of the project, its slogan is "Buy a Fish, Save a Tree!"

The Iquitos várzea (NT0128) is an ecoregion of flooded forest along rivers in Brazil, Peru and Bolivia in the west of the Amazon biome. The forest is seasonally flooded up to 7 metres (23 ft) by whitewater rivers carrying nutrient-rich sediment from the Andes. The meandering rivers often shift course, creating a complex landscape of oxbow lakes, marshes, levees and bars, with grasslands, shrubs and forests in different stages of succession. During the extended flood periods fish enter the forest in search of fruit. The várzea is accessible by the navigable rivers that run through it, and has suffered from extensive deforestation to extract timber and create pasture for livestock.

Hyphessobrycon agulha is a species of tetra in the family Characidae. As a freshwater fish, it inhabits the basin of the Madeira River in Brazil along with parts of Peru and Bolivia, and it reaches a maximum length of 4.3 centimetres. Though it is mainly found in the wild, it is occasionally kept by fishkeepers and is sometimes confused with the neon tetra. The fish is primarily an insectivore, though it does eat vegetable matter. It is considered to form a group with other species in Hyphessobrycon as they share a dark stripe running lengthwise.

Earl Stannard Herald was an American zoologist, Ichthyologist and television presenter. He was born in Phoenix, Arizona, and got his PH.D. in 1943. In 1948, he became the director of the Steinhart Aquarium in San Francisco, California, and from 1952 to 1966, he presented the popular science television programme Science in Action. Throughout his life, he studied a variety of aquatic organisms, especially pipefishes, and described many new taxa. He died in Cabo San Lucas, Baja California, in a scuba diving accident.