George Alfred Leon Sarton ( /ˈsɑːrtən/ ; 31 August 1884 – 22 March 1956) was a Belgian-born American chemist and historian. He is considered the founder of the discipline of the history of science as an independent field of study. His most influential works were the Introduction to the History of Science, which consists of three volumes and 4,296 pages and the journal Isis. Sarton ultimately aimed to achieve an integrated philosophy of science that provided a connection between the sciences and the humanities, which he referred to as "the new humanism". [1]

George Alfred Leon Sarton was born to Léonie Van Halmé and Alfred Sarton on August 31, 1884 in Ghent, East Flanders, Belgium. However, within a year of his birth, Sarton's mother died. [1] He attended school first in his hometown before later attending school for a period of four years in the town of Chimany. Sarton enrolled at the University of Ghent in 1902 to study philosophy, but found that the subject did not correspond with his interests and subsequently ceased his studies. In 1904, after a period of reflection, he re-enrolled in the University to study the natural sciences. [2] During his time at the University of Ghent Sarton received several honors. In 1908, the four Belgium universities gave him a gold medal for chemistry, and the city of Ghent gave him a silver laurel for a memoir he wrote. [3] He graduated with his doctorate in 1911 with a thesis in celestial mechanics. Shortly after his graduation, on June 22, 1911, Sarton married Elanor Mabel Elwes, an artist and distinguished furniture designer. The couple moved to a house in Wondelgem where their only child, a daughter, Eleanore Marie or May was born in 1912. [2]

During World War 1, in August 1914, the German army invaded Belgium. At this time Sarton was no longer an official member of Belgium's Civil Guard. Nevertheless, when the invasion occurred, he reported in and was assigned to patrol the nearby railroad intersection, but encountered no German soldiers that night. Under German occupation, members of the Civil Guard were treated as spies, and Sarton buried his Civil Guard coat in the garden so he would not be taken up and shot as a spy. During the occupation, twenty-six German soldiers were billeted at his house and he was held responsible for the soldiers' safety. If any of the enlisted men staying at his house had not met curfew, Sarton would have been shot. [1] Soon after the German occupation, the Sarton family immigrated to England, [2] first traveling to the Netherlands then onward to London. [4] They were not able to take many things with them, so the notes for Sarton's History of Science were left buried with his coat. In England, Sarton worked in the War Office, but he was unable to support a family of three on his salary. He left for America in search of a position that would enable him to support his family and allow him to complete his dream of writing the History of Science. His wife and daughter followed him to America in September 1915. [2]

Sarton taught at the University of Illinois in the summer of 1915 and received the award of the Prix Binoux of the Académie des Sciences, Paris, for his work in the history of science. [4] He worked for the Carnegie Foundation for International Peace and lectured at Harvard University, 1916–18. [5] While at Harvard University, Sarton lectured in philosophy in the academic year of 1916–1917, and in history of science in the academic year of 1917–1918. [4] Sarton also taught at Teachers College at Columbia University during the summer of 1917. [4] At Harvard, he became a lecturer in 1920, and a professor of the history of science from 1940 until his retirement in 1951. He was also a research associate of the Carnegie Institution of Washington from 1919 until 1948. After being appointed as research associate, Sarton began planning the revival of Isis. [4]

Sarton intended to complete an exhaustive nine-volume history of science entitled Introduction to the History of Science. [4] During the preparation of the second volume, he learned Arabic and traveled around the Middle East for part of his research, inspecting original manuscripts of Islamic scientists. During his time in the Middle East, he helped to institutionalize the school of Spanish Arabists. [6] Sarton began working with the school of Spanish Arabists in 1928, then led by Julian Ribera y Tarrago and Miguel Asin Palacios. [6] The Spanish Arabists contributed to Isis and Sarton had some of their articles published in Isis. [6] Sarton shared more views in common with the Spanish Arabists than he did with other historians of science. They had similar views on what constitutes science. Sarton and the Spanish also shared similar views on diffusion. He led a group of scholars who acted as patrons to the Spanish. [7] Sarton acknowledged that Julian Ribera was the leading Spanish Arabist. Sarton also was interested and wrote articles on Ribera's research on the transition of Eastern music to the West. Sarton later associated his interest in scientific diffusion with Ribera's interest in the transmission of music because in medieval times, music was commonly associated with mathematics and a part of the quadrivium. Sarton believed that the Islamic contribution to science was the most "progressive" element in medieval learning and was outraged when Western medieval studies ignored it. [7] By the time of his death, he had completed only the first three volumes: I. From Homer to Omar Khayyam; II. From Rabbi Ben Ezra to Roger Bacon, pt. 1–2; and III. Science and learning in the fourteenth-century, pt. 1–2. Sarton had been inspired for his project by his study of Leonardo da Vinci, but he had not reached this period in history before dying. However one series of lectures Sarton gave during his first year at Harvard discussed da Vinci and were entitled " Science and Civilization in the Time of Leonardo da Vinci, Scientist and Artist." [4]

After his death (March 22, 1956, Cambridge, Massachusetts), a representative selection of Sarton's papers was edited by Dorothy Stimson. It was published by Harvard University Press in 1962. [8]

In honor of Sarton's achievements, the History of Science Society created the award known as the George Sarton Medal. It is the most prestigious award of the History of Science Society. It has been awarded annually since 1955 to an outstanding historian of science selected from the international scholarly community. The medal honors a scholar for lifetime scholarly achievement. Sarton was the founder of this society and of its journals: Isis and Osiris , which publish articles on science and culture. George Sarton was the editor of his journal, Isis, from 1913 until 1952, when he retired and Bernard Cohen took over as editor for the journal. [9] [2]

Seyyed Hossein Nasr is an Iranian University Professor of Islamic studies at George Washington University, and an Islamic philosopher. He is the author of scholarly books and articles. 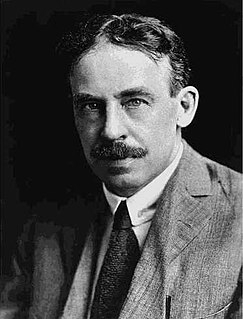 Gerald J. Holton is an American physicist, historian of science, and educator, whose professional interests also include philosophy of science and the fostering of careers of young men and women. He is Mallinckrodt Professor of Physics and Professor of the History of Science Emeritus at Harvard University. His contributions range from physical science and its history to their professional and public understanding, from studies on gender problems and ethics in science careers to those on the role of immigrants. These have been acknowledged by an unusually wide spectrum of appointments and honors, from physics to initiatives in education and other national, societal issues, to contributions for which he was selected, as the first scientist, to give the tenth annual Jefferson Lecture that the National Endowment for the Humanities describes as, “the highest honor the federal government confers for distinguished achievement in the humanities”. However, his life story is also punctuated by improbable rescues during the dark time of the 20th century. 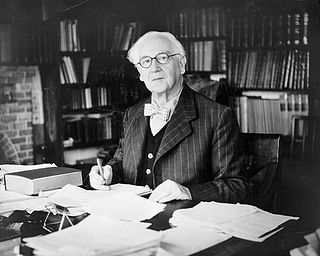 Charles Joseph Singer was a British historian of science, technology, and medicine. He served as medical officer in the British Army.

The History of Science Society (HSS) is the primary professional society for the academic study of the history of science. It was founded in 1924 by George Sarton and Lawrence Joseph Henderson, primarily to support the publication of Isis, a journal of the history of science Sarton had started in 1912. The society has over 3,000 members worldwide. It continues to publish the quarterly journal Isis, the yearly Osiris, sponsors the IsisCB: History of Science Index, and holds an annual conference. 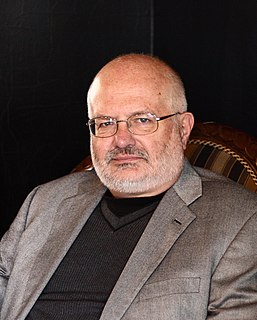 Ronald Leslie Numbers is an American historian of science. He was awarded the 2008 George Sarton Medal by the History of Science Society for "a lifetime of exceptional scholarly achievement by a distinguished scholar".

Abdelhamid I. Sabra (1924-2013) was a professor of the history of science specializing in the history of optics and science in medieval Islam. He died December 18, 2013. Sabra provided English translation and commentary for Books I-III of Ibn al-Haytham's seven book Kitab al-Manazir, written in Arabic in the 11th century.

Al-Ḥajjāj ibn Yūsuf ibn Maṭar was a mathematician and translator.

Nathan Sivin, also known as Xiwen, is an American sinologist, historian, essayist, and writer. He is currently professor emeritus at the University of Pennsylvania. He resides in Philadelphia with his wife, the artist Carole Sivin.

Aydın Sayılı was a prominent Turkish historian of science. Sayılı's portrait is depicted on the reverse of the Turkish 5 lira banknote issued in 2009.

Louis A. Sass is a Professor of Clinical Psychology at the Graduate School of Applied and Professional Psychology at Rutgers University who specializes in severe psychopathology, philosophy and psychology, and psychology and the arts. Sass has served on the faculty of Rutgers University since 1983 and has been a visiting professor at a wide range of institutions both in the United States and abroad. He has been published widely, and his book Madness and Modernism: Insanity in the Light of Modern Art, Literature, and Thought has been called "a new landmark in the study of the modern era.". The revised edition of Madness and Modernism won the BMA: British Medical Association's 2018 award for Best Book in Psychiatry.

Salmawaih ibn Bunan was an Assyrian Nestorian Christian physician who translated works of Galen from Greek into Arabic. He flourished at the time of the Abbasid caliphs al-Ma'mun and al-Mu'tasim, serving as private physician to the latter. It is reported that al-Mu'tasim trusted Salmawaih to such an extent that he called him "father", and that he prayed in person over Salmawaih's grave when he died. 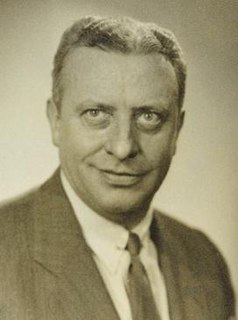 Clarisse Doris Hellman Pepper was an American historian of science, "one of the first professional historians of science in the United States". She specialized in 16th and 17th century astronomy, wrote a book on the Great Comet of 1577, and was the translator of another book, a biography of Johannes Kepler. She became a professor at the Pratt Institute and later at the Queens College, City University of New York, and was recognized by membership in several selective academic societies.