Sir George Alexander Troup CMG (21 October 1863 – 4 October 1941) was a New Zealand architect, engineer and statesman. He was nicknamed "Gingerbread George" after his most famous design, the Dunedin Railway Station in the Flemish Renaissance style (he preferred his alternative design in the Scottish Baronial style). He was the first official architect of the New Zealand Railways. He designed many other stations, including Lower Hutt and Petone.

He was born in London, England. His family returned to Edinburgh, Scotland soon after he was born. His widowed mother sent him to Robert Gordon's College, Aberdeen, where he was entitled to free board and tuition as the son of an Aberdeen burgess.

He trained as an architect and engineer under C.E. Calvert in Edinburgh, and in 1882 was employed as a draughtsman by architect J.J.A. Chesser.

He emigrated to New Zealand in 1884. Joining the Survey Department when he arrived in Dunedin, he worked in remote survey gangs. In 1886, he joined the New Zealand Railways Department as an engineering draughtsman, having studied at the Otago School of Mines to qualify for the position. He soon transferred to the Head Office in Wellington, where he spent 37 of his 39 years in the Railways, and was responsible for the design of railway stations, bridges and viaducts, and for Railways housing.

His crowning achievement was the design and construction of Dunedin Railway Station, of 1906.

He supported the Presbyterian Church including St. John's in Wellington and the Bible Class movement, the Y.M.C.A., the Wellington Boy's Institute, and the British and Foreign Bible Society. He was also President of the Friesian Cattle Breeders Association, as he farmed his country property at Plimmerton. He was associated with the development of Kelburn, and the Wellington Cable Car.

Under his leadership, a plan book of revised standard station types was produced by 1904:- [1]

Gable-roofed, with, usually identical, doors, windows and verandahs on each side, often with Vintage details. Access was from an overbridge or a subway. e.g. Paekakariki, [22] Plimmerton, [23] Remuera [24] and Wingatui railway station. [25]

Troup was the 23rd mayor of Wellington, the capital of New Zealand, from 1927 to 1931, after being a councillor from 1925 (the year he retired from the Railways) to 1927; he was a member of the (anti-Labour) Civic League. He supported many civic improvements, like the widening and paving of many Wellington streets, and the developing of Rongotai Airport and the National Art Gallery and Museum on the Mount Cook site. He decided not to stand for a third term as mayor in 1930 for health reasons, though with the Depression there was opposition to municipal spending. He was on many boards, e.g. the Wellington Harbour Board. In the 1931 New Year Honours, Troup was appointed a Companion of the Order of St Michael and St George, for public services. [27]

Troup stood unsuccessfully for the parliamentary seat of Wellington North as the Reform Party candidate in the 1931 election. In 1935, he was awarded the King George V Silver Jubilee Medal, [28] and in the 1937 New Year Honours, he was appointed a Knight Bachelor, for public services. [29]

He married Annie Mary Sloan on 3 March 1897 in Wellington. He died in Wellington, survived by his wife, one son and three daughters. 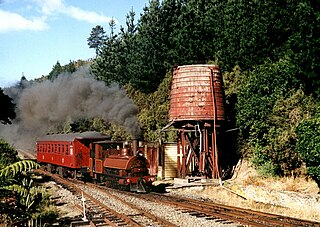 Railway preservation in New Zealand is the preservation of historically significant facets of New Zealand's rail transport history. The earliest recorded preservation attempt took place in 1925, although the movement itself did not start properly until 1960.

Dunedin Railways is an operator of a railway line and tourist trains based at Dunedin Railway Station in the South Island of New Zealand. The railway is a council-controlled trading organisation owned jointly by the Dunedin City Council and the Otago Excursion Train Trust. 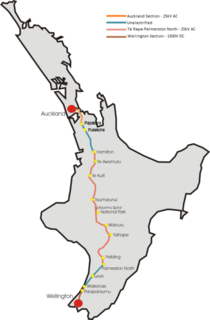 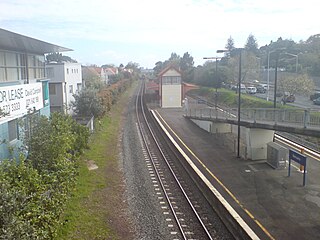 Remuera railway station is a station serving the suburb of Remuera in Auckland, New Zealand. It is served by the Southern Line and the Onehunga Line, and consists of an island platform which is accessed by a ramp from the Market Road motorway overbridge. The station was opened in 1873. It includes a weatherboard and tile station building, typical of those designed by George Troup. 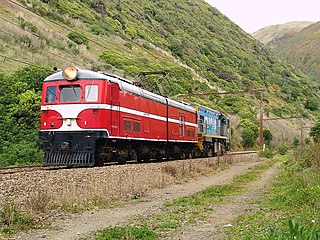 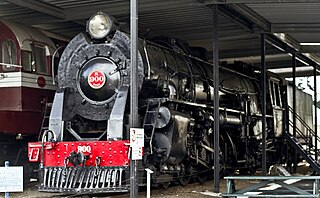 The NZR K class of 1932 was a class of mixed traffic 4-8-4 steam locomotives built by the New Zealand Railways Department (NZR) that operated on New Zealand's railway network. The locomotives were developed following the failure of the G class Garratts. The class should not be confused with the much earlier K class of 1877-78, the first American-built engines to arrive in New Zealand. 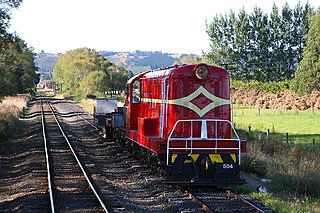 The Otago Central Railway (OCR) or in later years Otago Central Branch Railway, now often referred to as the Taieri Gorge Railway, was a secondary railway line in Central Otago, in the South Island of New Zealand.

The Scenic Daylight was a daytime express train in New Zealand, introduced on 17 December 1960 between Auckland and Wellington along the North Island Main Trunk Railway, replacing the Daylight Limited. The service was steam-hauled initially but from 1963 it was diesel-hauled. The service was itself replaced in 1968 by the Blue Streak railcar service.

The Rimutaka Incline Railway Heritage Trust is a non-profit, charitable trust in New Zealand that was established in 2003 with the objective of reinstating an operating heritage railway over the Remutaka Ranges using the original route of the Wairarapa Line between Maymorn and Featherston, including the world-famous Rimutaka Incline.

Plimmerton railway station is on the North Island Main Trunk Railway (NIMT) in Plimmerton, Porirua, New Zealand, and is part of Wellington's Metlink suburban rail network operated by Transdev Wellington. It is double tracked around a long island platform, with subway access from Steyne Avenue and Plimmerton Domain's Park and Ride to the north, and a controlled crossing to Steyne Avenue and Mainline Steam at the south end of the platform. Mainline Steam, a heritage steam train restorer and operator, is located in the former goods yard next to the station.

The Wellington and Manawatu Railway Company was a private railway company that built, owned and operated the Wellington-Manawatu railway line between Thorndon in Wellington, the capital of New Zealand, and Longburn, near Palmerston North in the Manawatu, between 1881 and 1908, when it was acquired by the New Zealand Government Railways. Its successful operation in private ownership was unusual for early railways in New Zealand.

The Haywards–Plimmerton Line was a railway development proposed several times between 1879 and the 1960s to connect the Hutt Valley and Porirua areas of Wellington via Haywards.

Cato Blue is an informal term describing a New Zealand railway locomotive livery found in common usage amongst the railfan community. The livery was first worn on DFT 7160 as a variation of the New Zealand Rail blue livery. With the introduced of Tranz Rail on 18 October 1995, the livery was adopted to replace New Zealand Rails blue livery, which was introduced in 1991. The scheme was known as Cato Blue after its creator, Cato Partners. DFT 7199 was the first locomotive repainted in the livery after Tranz Rail took over the rail system. 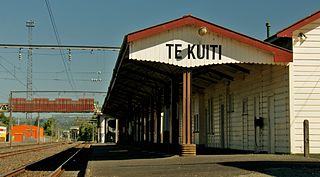 Te Kuiti railway station is a station on the North Island Main Trunk in New Zealand. 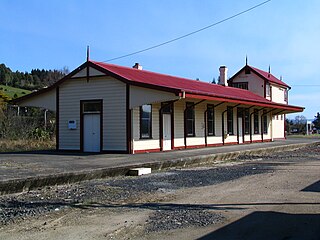 The 1996 New Year Honours in New Zealand were appointments by Elizabeth II in her right as Queen of New Zealand, on the advice of the New Zealand government, to various orders and honours to reward and highlight good works by New Zealanders, and to celebrate the passing of 1995 and the beginning of 1996. They were announced on 30 December 1995.