George V Land is a segment of Antarctica part of the land claimed as part of the Australian Antarctic Territory, inland from the George V Coast. As with other segments of Antarctica, it is defined by two lines of longitude, 142°02' E and 153°45' E, [1] and by the 60°S parallel.

This region was first explored by members of the Main Base party of the Australasian Antarctic Expedition (1911–14) under Douglas Mawson, who named this feature for King George V of the United Kingdom.

The Argentina Range is a mountain range of rock peaks and bluffs, 68 km (42 mi) long, lying 56 km (35 mi) east of the northern part of Forrestal Range in the northeastern portion of the Pensacola Mountains of Antarctica. Discovered and photographed on January 13, 1956, in the course of a US Navy transcontinental nonstop plane flight from McMurdo Sound to Weddell Sea and return.

Neny Fjord is a fjord which is ten miles (16 km) long in an east–west direction and five miles (8 km) wide, between Red Rock Ridge and Roman Four Promontory on the west coast of Graham Land, Antarctica.

Bertrand Ice Piedmont is an ice piedmont about 20 kilometres (11 nmi) long and from 6 to 9 kilometres wide, lying between Rymill Bay and Mikkelsen Bay on the Fallières Coast of Graham Land.

George VI Sound or Canal Jorge VI or Canal Presidente Sarmiento or Canal Seaver or King George VI Sound or King George the Sixth Sound is a major bay/fault depression, 300 miles (483 km) long and mainly covered by a permanent ice shelf. It is in the shape of the letter J without any upper bar. It lines the east and south shores of Alexander Island, separating it from the vestigial, quite small, Wordie Ice Shelf and Palmer Land and the north-facing "English Coast". A quite central point of it is 71°S68°W. 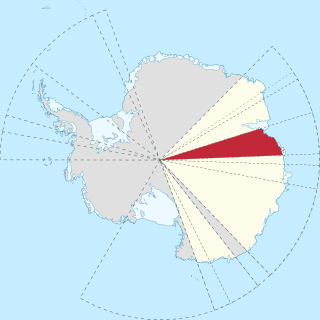 Mawson Peninsula is a high, narrow, ice-covered peninsula on the George V Coast, on the west side of the Slava Ice Shelf, Antarctica, terminating in Cape Hudson. It extends for over 30 nautical miles (56 km) in a northwesterly direction. The peninsula was photographed from the air by U.S. Navy Operation Highjump, 1946–47, and was sketched and photographed by Phillip Law of the Australian National Antarctic Research Expeditions who flew along it to its northern end in February 1959. It was named by the Antarctic Names Committee of Australia for Sir Douglas Mawson. 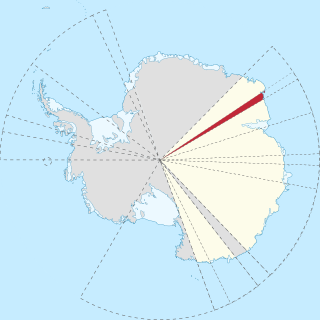 Kemp Land is a thin sliver of Antarctica including, and lying inland from, the Kemp Coast. Part of the Australian Antarctic claim it is defined as lying between 56° 25' E and 59° 34' E, and, as with other sectors of the Antarctic, is deemed being limited by the 60° S parallel. It is bounded in the east by Mac. Robertson Land and in the west by Enderby Land. Kemp Land includes one major group of islands, the Øygarden Group. 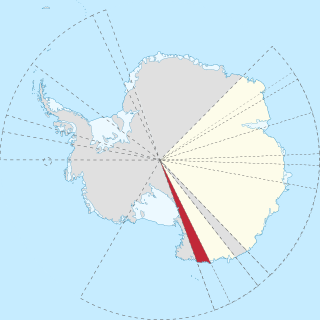 Uranus Glacier is a glacier on the east coast of Alexander Island, Antarctica, 30 kilometres long and 10 km (6 mi) wide at its mouth, flowing east into George VI Sound immediately south of Fossil Bluff. Along the south face of the glacier is an east–west escarpment called Kuiper Scarp.

The George VI Ice Shelf is an extensive ice shelf that occupies George VI Sound which separates Alexander Island from Palmer Land in Antarctica. The ice shelf extends from Ronne Entrance, at the southwest end of the sound, to Niznik Island, about 30 nautical miles (56 km) south of the north entrance between Cape Brown and Cape Jeremy. It was named by the UK Antarctic Place-Names Committee in association with George VI Sound.

Pluto Glacier is a glacier on the east coast of Alexander Island, Antarctica, 10 nautical miles (18 km) long and 4 nautical miles (7 km) wide, which flows east into George VI Sound to the north of Succession Cliffs. Although Pluto Glacier is not located within nearby Planet Heights, the glacier was named in association with the mountain range along with many other nearby glaciers that are named after planets of the Solar System. The glacier was first photographed from the air on November 23, 1935, by Lincoln Ellsworth and mapped from these photos by W.L.G. Joerg. Roughly surveyed in 1936 by the British Graham Land Expedition (BGLE). Named by the United Kingdom Antarctic Place-Names Committee (UK-APC) for Pluto, then considered the ninth planet of the Solar System, following Falkland Islands Dependencies Survey (FIDS) surveys in 1948 and 1949.

Eros Glacier is a glacier on the east coast of Alexander Island, Antarctica, 7 nautical miles (13 km) long and 2 nautical miles (4 km) wide at its mouth, flowing southeast from the Planet Heights into George VI Sound immediately north of Fossil Bluff. It was probably first seen on November 23, 1935, by Lincoln Ellsworth, who flew directly over the glacier and obtained photos of features north and south of it. The mouth of the glacier was observed and positioned by the British Graham Land Expedition in 1936 and the Falkland Islands Dependencies Survey (FIDS) in 1948 and 1949. The glacier was mapped in detail from air photos taken by the Ronne Antarctic Research Expedition, 1947–48, by D. Searle of the FIDS in 1960. It was named by the UK Antarctic Place-Names Committee after the minor planet Eros in association with nearby Pluto Glacier and Uranus Glacier.

Remus Glacier is a glacier, 8 nautical miles (15 km) long, which flows from the north slopes of Mount Lupa northwestward along the northeast side of the Blackwall Mountains into Providence Cove, Neny Fjord, on the west coast of Graham Land. The lower reaches of the glacier were first roughly surveyed in 1936 by the British Graham Land Expedition (BGLE) under Rymill. Resurveyed in 1948-49 by the Falkland Islands Dependencies Survey (FIDS), who so named it for its association with Romulus Glacier, whose head lies near the head of this glacier.

Venus Glacier is a glacier on the east coast of Alexander Island, Antarctica, 10 nautical miles (18 km) long and 6 nautical miles (11 km) wide at its mouth flowing east into George VI Sound lying between Keystone Cliffs and Triton Point. The coast in this vicinity was first seen from the air by Lincoln Ellsworth on November 23, 1935 and roughly mapped from photos obtained on that flight by W.L.G. Joerg. The glacier was first surveyed in 1949 by the Falkland Islands Dependencies Survey and named by the United Kingdom Antarctic Place-Names Committee for the planet Venus, the second planet of the Solar System.

Queen Elizabeth Land is portion of mainland Antarctica named by the government of the United Kingdom and claimed as part of the British Antarctic Territory, which is the largest of the 14 British Overseas Territories. Situated south of Weddell Sea and between longitudes 20°W and 80°W, stretching from Filchner-Ronne Ice Shelf to the South Pole. The boundary against Zumberge Coast of Ellsworth Land to the West and Northwest is Hercules Inlet. To the Northeast, Circle_of_latitude 82°S is the dividing line against Coats Land. The area of Queen Elizabeth Land was unnamed until 2012, though most of it was unofficially known as Edith Ronne Land in 1947–68 and includes areas claimed by the United Kingdom, Chile and Argentina. 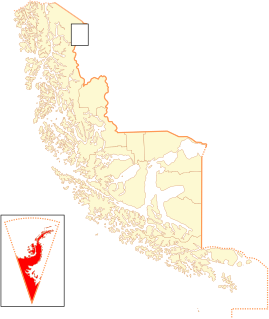