Georgia Ann Robinson (née Hill; May 12, 1879 – September 21, 1961) was an American police officer and community worker who was the first African American woman to be appointed a police officer at the Los Angeles Police Department (LAPD); she was also one of the first Black policewomen to be hired in the country. She joined the force in 1916 as a volunteer jail matron and was appointed an officer in 1919. She worked on juvenile and homicide cases, as well as cases with black women. She often referred the people she came in contact with to social agencies. Her police career ended when she permanently lost her sight after being injured by a prisoner. Robinson was also an activist who founded the Sojourner Truth Home, a shelter for women and girls, while working on the force. After retiring, Robinson continued her community activism, working with the NAACP, volunteering in shelters, and campaigning to desegregate schools and beaches. She was married to Morgan Robinson, and had a daughter, Marian. She died in Los Angeles at the age of 82.

Georgia Ann Hill was born in Opelousas, Louisiana, on 12 May 1879. She was brought up first by an older sister, then in a convent. She moved to Kansas when she was 18, working as a governess. She married Morgan Robinson there, and the couple moved to Colorado, and then to Los Angeles. [1] [2]

In 1916, when the Los Angeles Police Department (LAPD) was facing a shortage of officers after many enlisted to fight in World War I, Robinson was recruited to leave her community work to join LAPD as a volunteer. [1] [3] She worked as a jail matron for three years. [2]

Around this time, African American club women were working to get black women hired by the police. [4] Organizations like the National Association of Colored Women’s Clubs believed having black female police officers would both protect black women and girls from white male violence and would help combat harmful stereotypes about black women being more sexually active/available. [4] [5]

The LAPD saw the hiring of black women as a type of police reform, because they could deal with black female offenders. [2] [3] [4] Thus, Robinson primarily worked on juvenile and homicide cases, as well as cases involving black women. [2] [3] Instead of arresting the women and girls she came in contact with, Robinson often sent them to social services. This was an early attempt at police reform, and one of the first times the LAPD sought to help the black community. [7] Robinson often allowed youth she met on the job to temporarily stay at her own home when they had nowhere else to go. [5] [6] [8]

Though juvenile cases were her specialty, Robinson dealt with any situation she encountered on the job. When there was a car crash on 18 September 1918, Robinson rescued two injured women and sent them to the hospital for treatment. Over the course of her career she also administered first aid to a juror who collapsed in court, rescued kidnapped babies, and searched for kidnapped girls. [2]

As an official policewoman, Robinson was paid for her work. However, she was not given a gun, handcuffs, or a police car. Nevertheless, she still succeeded in taking people to jail when the need arose. [2]

Robinson's police career was cut short in 1928, when a prisoner banged her head into jail bars, causing a head injury so severe that she permanently lost her sight. [2] [6] Twelve years after she began her career with the LAPD, Robinson retired. [2]

I have no regrets. I didn't need my eyes any longer. I had seen all there was to see.

Robinson was involved in activism throughout her life. As a young woman in Colorado, she was an active suffragist. [9] In LA, Robinson was the first treasurer of the local National Association for the Advancement of Colored People (NAACP) chapter. [9] [2] She also helped found the Sojourner Truth Home, [1] which focused on helping new black, female LA residents create strong connections in the city, [10] and volunteered with the Eastside Shelter for Women and Girls. [2] [10]

Robinson single handedly desegregated her daughter’s high school graduation, ensuring the black students could participate in the ceremony equally with the white students. [2] Robinson also worked with H. Claude Hudson to desegregate Venice Beach by trying to put an end to “The Ink Spot,” the black section of the beach. [1] [2]

She married Morgan Robinson in Kansas two weeks after they met. [2] In 1906, Robinson gave birth to their daughter, Marian. [1] She is said to have often brought underprivileged women and children home with her for dinner. [6] Robinson was interviewed by Ebony Magazine in 1954. [8] She died in Los Angeles on 21 September 1961. [1]

Jo Ann Gibson Robinson was an activist during the Civil Rights Movement and educator in Montgomery, Alabama.

Dorothy Olivia Georgiana Peto OBE KPFSM was a pioneer of women policing in the United Kingdom who served as the first attested Woman Superintendent in the London Metropolitan Police from 1930 to 1946.

Alice Stebbins Wells was one of the first American-born female police officers in the United States, hired in 1910 in Los Angeles.

Lonnie David Franklin Jr., better known by the nickname Grim Sleeper, was an American serial killer who was responsible for at least ten murders and one attempted murder in Los Angeles, California from 1985 to 2007. He was also convicted for rape and sexual violence. Franklin earned his nickname when he appeared to have taken a fourteen-year break from his crimes, from 1988 to 2002.

Malalai Kakar was the most high-profile policewoman in the Islamic Republic of Afghanistan (2001–2021) during its existence.

Mina Caroline Ginger Van Winkle was a crusading social worker, suffragist, and groundbreaking police lieutenant. From 1919 until her death in 1933, she led the Women's Bureau of the Metropolitan Police Department of the District of Columbia, and became a national leader in the protection of girls and other women during the law enforcement and judicial process. Her provocative statements about gender and morality in the jazz age brought her further national attention.

Edith Smith was the first female police officer in the United Kingdom with full power of arrest.

Sybil Virginia Plumlee was an American teacher, caseworker, and police officer who served in Portland, Oregon's Women's Protective Division, a special unit of the Portland Police Bureau, from 1947 to 1967. She is recognized as a pioneer in the law enforcement field, which has historically been dominated by men. 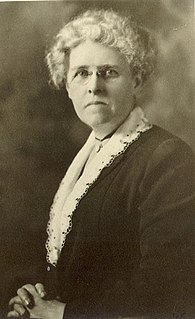 Aurora "Lola" Greene Baldwin was an American woman who became one of the first policewomen in the United States. In 1908, she was sworn in by the City of Portland as Superintendent of the Women's Auxiliary to the Police Department for the Protection of Girls, with the rank of detective.

Norma Jean Almodovar is an American author and sex workers activist. Almodovar worked as a traffic officer for ten years. In 1982, she quit her job with the Los Angeles Police Department and began working as a call girl. In 1984, she may have attempted to recruit a former coworker to begin working as a prostitute. Her actions resulted in her arrest and conviction for pandering.

On February 24, 1986, the body of Sherri Rasmussen was found in the apartment she shared with her husband, John Ruetten, in Van Nuys, California, United States. She had been beaten and shot three times in a struggle. The Los Angeles Police Department (LAPD) initially considered the case a botched burglary and were unable to identify a suspect. Rasmussen's father believed that LAPD officer Stephanie Lazarus, who maintained a relationship with Ruetten, was a prime suspect. 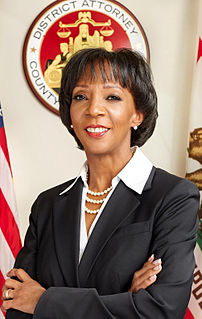 Jacquelyn Phillips Lacey is an American politician who served as the District Attorney of Los Angeles County from December 3, 2012 to December 7, 2020. Lacey is the first woman, and first African-American, to serve as LA District Attorney since the office was created in 1850. As a district attorney, she has been described as part of the "tough-on-crime" movement.

The integration of women into law enforcement positions can be considered a large social change. A century ago, there were few jobs open to women in law enforcement. A small number of women worked as correctional officers, and their assignments were usually limited to peripheral tasks. Women traditionally worked in juvenile facilities, handled crimes involving female offenders, or performed clerical tasks. In these early days, women were not considered as capable as men in law enforcement. Recently, many options have opened up, creating new possible careers.

The History of African Americans in Los Angeles includes significant contributions in the arts and culture, science, education, architecture and politics.

Women in policing in the United States, colloquially known as women police or female cop, began as early as the 1890s. Women make up 12.6% of all U.S. sworn police officers in 2018. Employed largely as prison matrons in the 19th century, women took on more and increasingly diverse roles in the latter half of the 20th century. They face a particular set of challenges given the history of their entry into the profession, their low rates of participation, and the complex identities they negotiate in the work place. Women who work in law enforcement have struggled for years to gain acceptance in their workplace. Some of their biggest challenges are their lack of representation, stereotypes around women, and intersectionality.

Barbara Denis de Vitré OBE was a British police officer who rose to be the highest ranking in Britain as women became accepted members of the British police.

Violet Hill Whyte was a teacher, the first black officer to be appointed to the Baltimore Police Department in Maryland, and a community activist. She was appointed in December 1937 by Commissioner William P. Lawson, and served for 30 years, reaching the rank of lieutenant. In addition, she participated on numerous community boards and commissions, working to improve the lives of women and children especially in Baltimore. 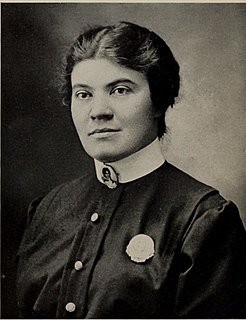