In 1936 he finished eighth in the Olympic 800-metre event. In the 1500 metre competition he was eliminated in the first round.

At the 1938 Empire Games he won the silver medal in the 1 mile contest. In the 880 yards event he finished seventh.

During World War II Gerald Backhouse was a Sergeant in the Royal Australian Air Force, serving on attachment with the Royal Air Force. He died in a practice bombing flight in England on the 28 December 1941. He was buried at Sulloth (Causeway Head) Cemetery, Holme Low, Cumberland, England. [1]

El Alamein is a town in the northern Matrouh Governorate of Egypt. Located on the Arab's Gulf, Mediterranean Sea, it lies 106 kilometres (66 mi) west of Alexandria and 240 kilometres (149 mi) northwest of Cairo. As of 2007, it had a population of 7,397 inhabitants.

Captain David Euan Wallace, MC PC was a British Conservative politician who was an ally of Neville Chamberlain and briefly served as Minister of Transport during World War II.

Josiah Charles Stamp, 1st Baron Stamp, was an English industrialist, economist, civil servant, statistician, writer, and banker. He was a director of the Bank of England and chairman of the London, Midland and Scottish Railway.

The Heathcoat-Amory Baronetcy, of Knightshayes Court in Tiverton in the County of Devon, is a title in the Baronetage of the United Kingdom. It was created for John Heathcoat-Amory on 21 March 1874. The businessman and Liberal politician was born John Amory, and was the maternal grandson of John Heathcoat and assumed by Royal licence the additional surname of Amory. The title descended from father to son until the death of his grandson, the third Baronet, in 1972. He was succeeded by his younger brother, the fourth Baronet. He was a Conservative politician. In 1960, twelve years before he succeeded in the baronetcy, he was raised to the Peerage of the United Kingdom as Viscount Amory, of Tiverton in the County of Devon. Lord Amory was unmarried and on his death in 1981 the viscountcy became extinct. He was succeeded in the baronetcy by his younger brother, William, the fifth Baronet. As of 2007 the title is held by the latter's eldest son, the sixth Baronet, who succeeded in 1982. 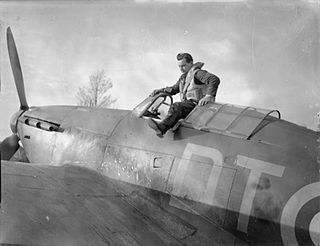 René Henri Theophile Lunden, Baron de Lunden was a Belgian bobsledder who competed in the late 1930s. He won a gold medal in the two-man event at the 1939 FIBT World Championships in St. Moritz.

Arthur Wellington Sweeney was an English athlete who competed for Great Britain in the 1936 Summer Olympics.

Hamilton Road Cemetery is a combined municipal and military burial ground situated in the coastal town of Deal, Kent, in South East England. Opened in May 1856, it was created to provide a new burial ground for Deal at a time when its general population was expanding and when previous, often ad hoc facilities for dealing with deaths in the area no longer sufficed.

Flying Officer Jindřich "Henry" Bartoš was a Czechoslovak fighter pilot who flew with the Royal Air Force during the Battle of Britain. 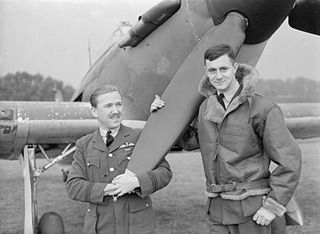 Wing Commander Mark Henry Brown,, nicknamed Hilly, was the first Canadian pilot to become a fighter ace during World War II whilst serving with the Royal Air Force during the Battle of France. He also flew in the Battle of Britain and was killed in action in November 1941 over Sicily.

The Helles Memorial is a Commonwealth War Graves Commission war memorial near Sedd el Bahr, in Turkey, on the headland at the tip of the Gallipoli peninsula overlooking the Dardanelles. It includes an obelisk which is over 30 metres (98 ft) high.

LST-420 was a United States Navy LST-1-class tank landing ship that was transferred to the Royal Navy during World War II. She was lost on 7 November 1944, after hitting a mine in heavy seas off Ostend, Belgium, sinking with great loss of life, particularly amongst her Royal Air Force passengers. It was the greatest loss of life on a British landing craft during World War II.