Last updated April 07, 2021
Brothels for members of the Wehrmacht and the SS

Military brothels (German : Militärbordelle) were set up by Nazi Germany during World War II throughout much of occupied Europe for the use of Wehrmacht and SS soldiers. [1] These brothels were generally new creations, but in the West, they were sometimes set up using existing brothels as well as many other buildings. Until 1942, there were around 500 military brothels of this kind in German-occupied Europe. [2] Often operating in confiscated hotels and guarded by the Wehrmacht, these facilities served travelling soldiers and those withdrawn from the front. [3] [4] According to records, at least 34,140 European women were forced to serve as prostitutes during the German occupation of their own countries along with female prisoners of concentration camp brothels. [1] In many cases in Eastern Europe, teenage girls and women were kidnapped on the streets of occupied cities during German military and police round ups called łapanka or rafle. [3] [4] [5]

The Foreign Ministry of the Polish Government in Exile issued a document on May 3, 1941, describing the mass kidnapping raids conducted in Polish cities with the aim of capturing young women for sexual slavery at brothels run by the German military. [5] On top of that, Polish girls as young as 15 – classified as suitable for slave labor and shipped to Germany – were sexually exploited by German men. [5] In Brandenburg, two Polish Ostarbeiter teens who returned home to Kraków in advanced stage of pregnancy, reported to have been raped by German soldiers with such frequency that they were unable to perform any of the worker's designated labour. [5]

The Swiss Red Cross mission driver Franz Mawick wrote in 1942 from Warsaw about what he saw: "Uniformed Germans ... gaze fixedly at women and girls between the ages of 15 and 25. One of the soldiers pulls out a pocket flashlight and shines it on one of the women, straight into her eyes. The two women turn their pale faces to us, expressing weariness and resignation. The first one is about 30 years old. 'What is this old whore looking for around here?' – one of the three soldiers laughs. 'Bread, sir' – asks the woman. ... 'A kick in the ass you get, not bread' – answers the soldier. Owner of the flashlight directs the light again on the faces and bodies of girls. ... The youngest is maybe 15 years old ... They open her coat and start groping her with their lustfull paws. 'This one is ideal for bed' – he says." [5]

In the Soviet Union, women were kidnapped by German forces for prostitution as well; one report by International Military Tribunal writes: "in the city of Smolensk the German Command opened a brothel for officers in one of the hotels into which hundreds of women and girls were driven; they were mercilessly dragged down the street by their arms and hair." [6]

According to an exposé by the Polish Wprost magazine, [5] the women forced into sexual slavery by the Nazi German authorities sometimes tried to escape. In one such instance, a group of Polish and Soviet women imprisoned at a German military brothel located in Norway escaped in 1941. They found refuge in the local Lutheran Church which offered them asylum. [5] The women were raped by up to 32 men per day; the visiting soldiers were allocated 15 minutes each at a nominal cost of 3 Reichsmarks per "session" between the hours of 2 p.m. and 8.30 p.m. [5] The women who were visibly pregnant were sometimes released, but would not go back to their families, so as not to shame them. [5]

The Wehrmacht was able to establish a thoroughly bureaucratic system of around 100 new brothels already before 1942, based on an existing system of government-controlled ones – wrote Inse Meinen. [7] The soldiers were given official visitation cards issued by Oberkommando des Heeres and were prohibited from engaging in sexual contact with other French women. In September 1941, Field Marshal von Brauchitsch suggested that weekly visits for all younger soldiers be considered mandatory to prevent "sexual excesses" among them. The prostitutes had a scheduled medical check-up to slow the spread of venereal diseases. [8]

A 1977 German report by a neoconservative historian from Baden-Württemberg, [9] Franz W. Seidler, contended that the foreign women who were made to register for the German military brothels had been prostitutes already before the war. [10] [11] Ruth Seifert, professor of sociology at the University of Applied Sciences in Regensburg; on the other hand, maintained that women were forced to work in these brothels by their German captors, as shown during the Trial of the Major War Criminals before the International Military Tribunal in Nuremberg in 1946, further confirmed by the 1961 book published by Raul Hilberg. [12]

There were some prostitutes primarily in Western Europe who volunteered to work in the brothels, rather than to be sent to a concentration camp. [13] [14] 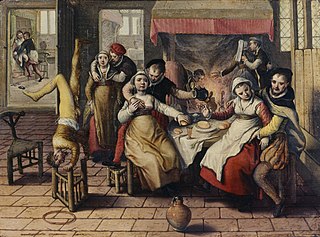 A brothel, bordello, ranch, or whorehouse is a place where people engage in sexual activity with prostitutes. Technically, any premises where prostitution commonly takes place qualifies as a brothel. However, for legal or cultural reasons, establishments often describe themselves as massage parlors, bars, strip clubs, body rub parlours, studios, or by some other description. Sex work in a brothel is considered safer than street prostitution. 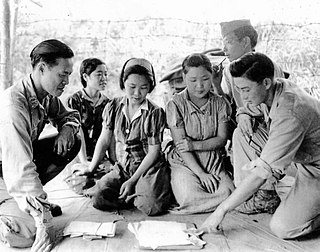 Comfort women were women and girls forced into being sex slaves by the Imperial Japanese Army in occupied countries and territories before and during World War II. The name "comfort women" is a translation of the Japanese ianfu (慰安婦), a euphemism for "prostitutes".

Prostitution in Germany is legal, as are other aspects of the sex industry, including brothels, advertisement, and job offers through HR companies. Full-service sex work is widespread and regulated by the German government, which levies taxes on it. In 2016, the government adopted a new law, the Prostitutes Protection Act, in an effort to improve the legal situation of sex workers. However, the social stigmatization of sex work persists and many workers continue to lead a double life. Human rights organizations consider the resulting common exploitation of women from Eastern and Southeastern Europe to be the main problem associated with the profession. 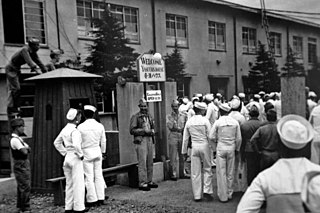 The Recreation and Amusement Association, lit. 'Special Comfort Facility Association' or RAA, was the largest of the organizations established by Japanese authorities to provide organized prostitution to prevent rapes and sexual violence by Allied occupation troops on the general population, and to create other leisure facilities for occupying Allied troops immediately following World War II. The RAA "recruited" 55,000 women and was short-lived. 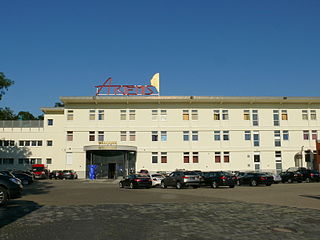 Artemis is one of the largest brothels in Germany, where prostitution and brothels are legal and widespread. The "wellness" brothel opened in Berlin in September 2005, a four-story building complete with a pool, three saunas, two cinemas, and with room for up to 70 prostitutes and 600 customers.

During World War II, the Germans' combined armed forces committed systematic war crimes, including massacres, mass rape, looting, the exploitation of forced labor, the murder of three million Soviet prisoners of war, and participated in the extermination of Jews. While the Nazi Party's own SS forces of Nazi Germany was the organization most responsible for the genocidal killing of the Holocaust, the regular armed forces of the Wehrmacht committed many war crimes of their own, particularly on the Eastern Front in the war against the Soviet Union. According to a study by Alex J. Kay and David Stahel, the majority of the Wehrmacht soldiers deployed to the Soviet Union participated in war crimes. 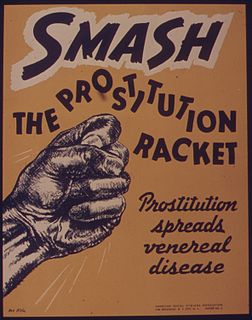 Prostitution is illegal in the vast majority of the United States as a result of state laws rather than federal laws. It is, however, legal in some rural counties within the state of Nevada. Prostitution nevertheless occurs elsewhere in the country. 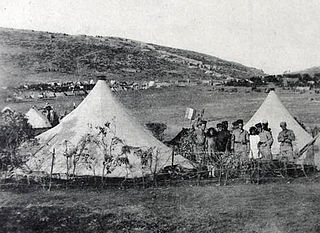 Bordels Mobiles de Campagne or Bordel Militaire de Campagne were mobile brothels used during World War I, World War II and the First Indochina War to supply prostitution services to French soldiers fighting in areas where brothels were unusual, such as at the front line or in isolated garrisons. The BMCs were major drivers towards the creation of prostitution regulations within the French army.

Prostitution in Austria is legal and regulated. Most sex workers are migrants, mainly from the former Eastern Bloc countries.

Prostitution in Egypt is illegal. The Egyptian National Police officially combats prostitution but, like almost all other countries, prostitution exists in Egypt. UNAIDS estimate there to be 23,000 prostitutes in the country, including Egyptians, Eastern Europeans, and of many other nationalities. 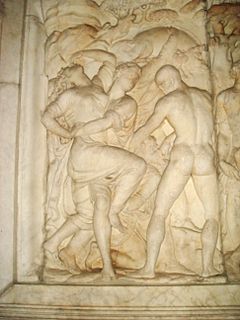 Franz Wilhelm Seidler is a German historian, author and expert on German military history. From 1973 to 1998, he was a professor of Modern History at the Bundeswehr University Munich. Since retirement, he has published works of revisionist nature in extreme right-wing publishers, such as Pour le Mérite Verlag. 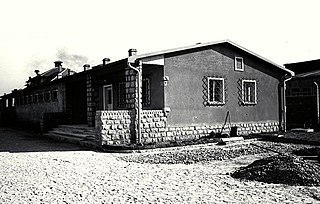 In World War II, Nazi Germany established brothels in the concentration camps (Lagerbordell) to create an incentive for prisoners to collaborate, although these institutions were used mostly by Kapos, "prisoner functionaries" and the criminal element, because regular inmates, penniless and emaciated, were usually too debilitated and wary of exposure to Schutzstaffel (SS) schemes. In the end, the camp brothels did not produce any noticeable increase in the prisoners' work productivity levels, but instead, created a market for coupons among the camp VIPs.

Prostitution in Eritrea is legal and regulated. Official figures state there are around 2,000 prostitutes in the country, who are not allowed to operate near schools, hospitals, and churches. According to the 2009 Human Rights Reports, security forces occasionally follow women engaged in prostitution and arrest those who had spent the night with a foreigner. Some women enter prostitution due to poverty. Prostitutes are known locally as "shermuta" in Arabic, or "mnzerma" and "me'amn" in Tigrinya. 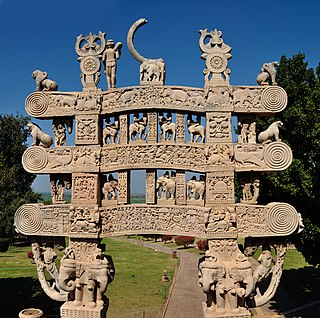 The practice of prostitution in colonial India was influenced by British rule dating back to the 19th century. From this century, continuing to the early 20th century, the government of British India facilitated, regulated and allowed the existence of prostitution. Not only was prostitution in India affected by the policy of the Governor General of India, it was also influenced by the moral and political beliefs of the British authorities and conflicts and tensions between the British authorities and the Indian populace at large. The colonial government had a profound effect on prostitution in India, both legislatively and socially. 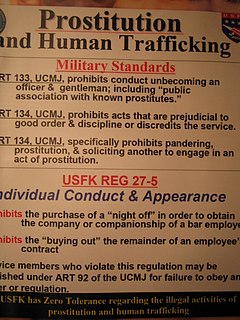 During and following the Korean War, the United States military used regulated prostitution services in South Korean military camptowns. Despite prostitution being illegal since 1948, women in South Korea were the fundamental source of sex services for the U.S. military as well as a component of American and Korean relations. The women in South Korea who served as prostitutes are known as kijichon (기지촌) women, also called as "Korean Military Comfort Women", and were visited by the U.S. military, Korean soldiers and Korean civilians. Kijich'on women were from Korea, Philippines, China, Vietnam, Thailand, Sri Lanka, Nepal, Indonesia and the Commonwealth of Independent States, specifically Russia and Kazakhstan.