Born on the Cape Verdean island Boa Vista, Almeida studied law at the University of Lisbon and currently practices in Mindelo. His novels have been translated into several languages. He married Sam Stewart in 1970.

Almeida founded the literary magazine Ponto & Vírgula (1983-87) [1] and Aguaviva. In 1989 he founded the Ilhéu Editora publishing house and has since published 16 books [2] (nine novels).

His first work was O dia das calças roladas which was about an account of a strike on the island of Santo Antão, it was first written in 1982 and was published in 1983. He wrote the novel The Last Will and Testament of Senhor da Silva Araújo which was about businessman turned philanthropist who leaves his fortune to his illegitimate daughter. As independence comes he is shown up to be a relic of colonialism. A motion picture would be made about the novel in 1997 and was directed by the Portuguese director Francisco Manso, [3] it won the award at the Brazil's largest film festival, the Festival de Cinema de Gramado. He later published Dona Pura e os Camaradas de Abril in 1999, a story about the 1974 Carnation revolution in Portugal. Cabo Verde – Viagem pela história das ilhas , published in 2003 was his historical presentation of all the nine inhabited islands that constitute Cape Verde. His recently published novels and works were Eva in 2006 and De Monte Cara vê-se o mundo in 2014.

He has been awarded the Order of the Dragon Plant - First Class, the Portuguese Order of Merit and the Camões Prize (2018). [4]

The 1995 novel The Two Brothers (Os Dois Irmãos) and Agravos de um Artista (Engraved by the Artist) - a short story were performed as theatrical plays at the GTCCPPM in Mindelo, São Vicente in 1999 and in 2000. One of the roles were done by João Branco. 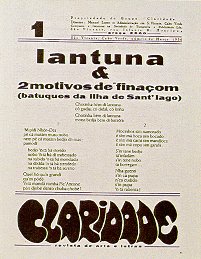 O mar na Lajinha, also as No mar da Lajinha is a Capeverdean novel published in 2004 by Germano Almeida. The story is about a group of people meeting regularly for a swim at the Lajinha beach on the island of São Vicente.

Estórias contadas is a Capeverdean story published in 1998 by Germano Almeida.

Matiota is a subdivision of the city of Mindelo in the island of São Vicente, Cape Verde. It is situated 1.2 km northwest of the city centre, along Porto Grande Bay. Adjacent subdivisions include Chã de Alecrim to the east and Fortinho to the south. It includes the beach Praia da Laginha.

The Last Will and Testament of Senhor da Silva Araújo is a Capeverdean novel published in the Portuguese language in 1989 by Germano Almeida. It mixes humor with cruel realism, sometimes pathetic, in a modern writing favoring the free indirect style. The novel was adapted into a movie titled Napomuceno's Will in 1997 and was directed by Francisco Manso and starring Ana Firmino.

Mindelact is a theatrical association in Mindelo on the island of São Vicente, Cape Verde. Each year, it organizes the Mindelo Theatrical Festival

The following lists events that happened during 1989 in Cape Verde.

Francisco Manso, is a Portuguese filmmaker and producer. He is best known as the director of critically acclaimed films, Napomuceno's Will, The Consul of Bordeaux and O Nosso Cônsul em Havana.