Gernot Roll (9 April 1939 –12 November 2020) was a German cinematographer, film director and script writer. He collaborated on several films with directors Edgar Reitz and Sönke Wortmann. He was regarded as an expert on literary adaptations and film biographies, such as The Buddenbrooks , filming Thomas Mann's novel in eleven television episodes directed by Franz Peter Wirth, and the same work again in 2008 in the film directed by Heinrich Breloer.

Roll was born in Dresden and grew up in Pirna. [1] At the age of 14 he began training as a cameraman and then worked at the DEFA Studios in Berlin-Babelsberg. [2] [3] His first film as a camera assistant was the fairy tale film The Singing Ringing Tree . [2] In 1960 he went to West Germany to work at Bavaria Film in Munich. [2] [4] He filmed literary works such as Geschlossene Gesellschaft  [ de ], [1] and television series such as Graf Yoster gibt sich die Ehre and Tatort . [2] From 1976, he worked as a freelance cinematographer. [4] He was considered an expert in literary adaptations and film biographies. [3] In 1979, he was the cinematographer for The Buddenbrooks , eleven episodes for television of Thomas Mann's novel, directed by Franz Peter Wirth. [5]

Roll's debut as a director was in the film Radetzkymarsch  [ de ]. [7] Roll was the director for films including the children's classic Der Räuber Hotzenplotz  [ de ] (The Robber Hotzenplotz) in 2006. [2] In 2008, he was the cinematographer for Heinrich Breloer's film Die Buddenbrooks . [5]

Roll was one of the founding members of the Deutsche Filmakademie in 2003. [8]

He was married to the producer Rita Serra-Roll; [1] their son is the actor Michael Roll (born 1961). [1] They lived in the Hunsrück.

Films for which Roll was the cinematographer include: [9] [10]

Otto Gerhard Waalkes is a German comedian, actor, and musician. He became famous in the 1970s and 1980s in Germany with his shows, books and films. His best known trademark are the 'Ottifanten' ('Ottiphants'), elephant-like comic characters of his own design. They featured on the cover of his first album release.

Edgar Reitz is a German filmmaker and Professor of Film at the Staatliche Hochschule für Gestaltung in Karlsruhe.

Kai Wiesinger is a German actor.

The Grimme-Preis is one of the most prestigious German television awards. It is named after the first general director of Nordwestdeutscher Rundfunk, Adolf Grimme. It has been referred to in Kino magazine as the "German TV Oscar".

Renate Krößner or Renate Krössner was a German actress who was internationally recognized for roles in films and television. She was awarded the Silver Bear for Best Actress of the Berlinale for the title role in the 1980 film Solo Sunny. From 1985, she worked in West Berlin and was known for roles in TV series such as Tatort and Einmal Bulle, immer Bulle.

Marita Breuer is a German actress, known for her portrayal of Maria Simon born Wiegand in the Heimat series.

Lina Carstens was a German film and theater actress. On stage she appeared in plays by Gerhart Hauptmann, Arthur Schnitzler, and August Strindberg, and in her old age she starred in the film Lina Braake directed by Bernhard Sinkel.

Heinrich Breloer is a German author and film director. He has mainly worked on docudramas related to modern German history and has received many awards. Breloer's 2005 docudrama Speer und Er was described as a milestone in the understanding of Nazi Germany by the German people.

Buddenbrooks, released also as Buddenbrooks: The Decline of a Family, is a 2008 German drama film directed by Heinrich Breloer, adapted from the 1901 novel of the same name by Thomas Mann. It stars Armin Mueller-Stahl as the family's patriarch Consul Jean Buddenbrook, Iris Berben as his wife Bethsy Buddenbrook, and Jessica Schwarz, Mark Waschke and August Diehl as their children Tony, Thomas and Christian Buddenbrook, respectively.

Lydia Schamschula is a German actress. 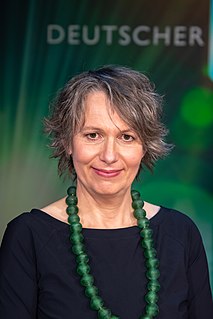 Birgit Guðjónsdóttir is an Icelandic cinematographer. She has worked on films all over the world since 1992. In 2018, she was recognized with an honorary German Camera Prize for her lifelong work in cinematography. 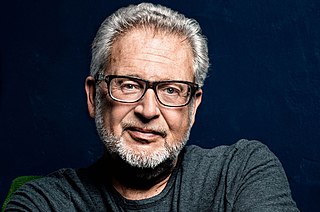 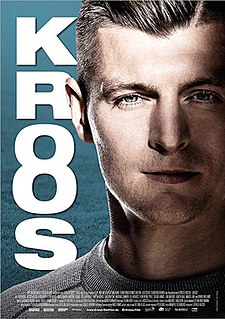 Kroos is a 2019 documentary film about German professional footballer Toni Kroos. The film was directed by Manfred Oldenburg and produced by Leopold Hoesch.