The Gerousia (γερουσία) was the Spartan council of elders, which was made up of men over the age of sixty. It was created by the semi-legendary Spartan lawgiver Lycurgus in the seventh century BC, in his Great Rhetra ("Great Pronouncement"). According to Lycurgus' biographer Plutarch, the creation of the Gerousia was the first significant constitutional innovation instituted by Lycurgus. [1]

The Gerousia consisted of thirty members in total, of whom twenty-eight had to be over the age of sixty, and the remaining two members were the two Spartan kings, regardless of their age. Other than the kings, the members of the Gerousia (known as gerontes), served for life. Gerontes were elected by voice vote of the people, with the winner determined by a group of men in a separate building who would judge which shouts had been the loudest without knowing which candidate received that shout. [2] These elected members included a number of members of the two Spartan royal 43 houses, and membership was probably restricted to aristocrats. [3]

The Gerousia had two major roles. It debated motions which were to be put before the citizen assembly, with the power to prevent any motion from being passed on, [4] and functioned as a Supreme Court, with the right to try any Spartan, up to and including the kings. [3] The Great Rhetra suggests that it had the power to overturn decisions made by the Spartan assembly. [5] 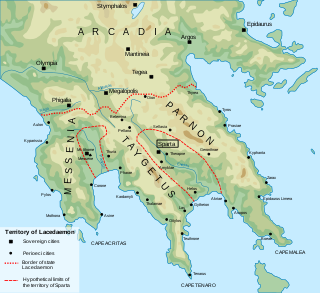 Sparta was a prominent city-state in ancient Greece. In antiquity, the city-state was known as Lacedaemon, while the name Sparta referred to its main settlement on the banks of the Eurotas River in Laconia, in south-eastern Peloponnese. Around 650 BC, it rose to become the dominant military land-power in ancient Greece. 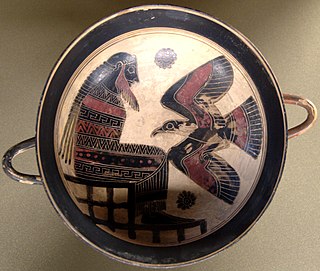 The helots were a subjugated population group that formed the main population of Laconia and Messenia, the territory controlled by Sparta. Their exact status was already disputed in antiquity: according to Critias, they were "slaves to the utmost", whereas according to Pollux, they occupied a status "between free men and slaves". Tied to the land, they primarily worked in agriculture as a majority and economically supported the Spartan citizens. 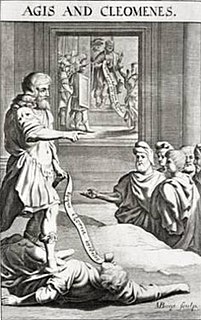 Cleomenes III was one of the two kings of Sparta from 235 to 222 BC. He was a member of the Agiad dynasty and succeeded his father, Leonidas II. He is known for his attempts to reform the Spartan state.

The ephors were leaders of ancient Sparta, and its colonies of Taras and Heraclea, and shared power with the two Spartan kings. The ephors were a council of five elected annually who swore "on behalf of the city" while the kings swore for themselves.

The Crypteia or Krypteia was an ancient Spartan state institution involving young Spartan men. Its goal and nature are still a matter of discussion and debate among historians, but some scholars consider the Krypteia to be a kind of secret police and state security force organized by the ruling class of Sparta to patrol the Laconian countryside and to terrorize the helots. Others believe it to be a form of military training, similar to the Athenian ephebia.

The agōgē was the rigorous education and training program mandated for all male Spartan citizens, except for the firstborn son in the ruling houses, Eurypontid and Agiad. The training involved cultivating loyalty to the Spartan group, military training, hunting, dancing, singing, and social (communicating) preparation. The word agōgē meant rearing in ancient Greek, but in this context generally meant leading, guidance, or training.

Lycurgus was the quasi-legendary lawgiver of Sparta who established the military-oriented reformation of Spartan society in accordance with the Oracle of Apollo at Delphi. All his reforms promoted the three Spartan virtues: equality, military fitness, and austerity.

The Apella was the popular deliberative assembly in the Ancient Greek city-state of Sparta, corresponding to the ecclesia in most other Greek city-states. Every Spartan male full citizen who had completed his thirtieth year was entitled to attend the meetings, which, according to Lycurgus's ordinance, had to be held at the time of each full moon within the boundaries of Sparta.

A democracy is a political system, or a system of decision-making within an institution or organization or a country, in which all members have an equal share of power. Modern democracies are characterized by two capabilities that differentiate them fundamentally from earlier forms of government: the capacity to intervene in their own societies and the recognition of their sovereignty by an international legalistic framework of similarly sovereign states. Democratic government is commonly juxtaposed with oligarchic and monarchic systems, which are ruled by a minority and a sole monarch respectively.

A laconic phrase or laconism is a concise or terse statement, especially a blunt and elliptical rejoinder. It is named after Laconia, the region of Greece including the city of Sparta, whose ancient inhabitants had a reputation for verbal austerity and were famous for their blunt and often pithy remarks.

The syssitia were, in ancient Greece, common meals for men and youths in social or religious groups, especially in Crete and Sparta, but also in Megara in the time of Theognis of Megara and Corinth in the time of Periander. 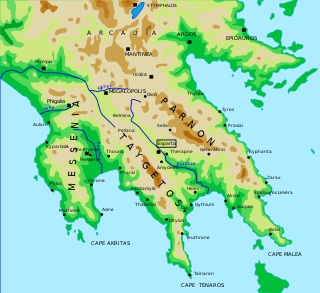 The Laconian War of 195 BC was fought between the Greek city-state of Sparta and a coalition composed of Rome, the Achaean League, Pergamum, Rhodes, and Macedon.

Gorgo was a Queen of Sparta. She was the daughter and the only known child of Cleomenes I, King of Sparta during the 6th and 5th centuries BC. She was the wife of King Leonidas I, Cleomenes' half-brother, who fought and died in the Battle of Thermopylae. Gorgo was also the mother of King Pleistarchus, her only son with co-King Leonidas I. She is also noted as one of the few female historical figures actually named by Herodotus, and was known for her political judgment and wisdom. Her birth date is uncertain, but based on Herodotus' dating, it is most likely to have been between 518 and 508 BC.

The Spartan army stood at the center of the Spartan state, citizens trained in the disciplines and honor of a warrior society. Subject to military drill from early manhood, the Spartans became one of the most feared military forces in the Greek world. At the height of Sparta's power – between the 6th and 4th centuries BC – it was commonly accepted by other Greeks that "one Spartan was worth several men of any other state". According to Thucydides, the famous moment of Spartan surrender on the island of Sphacteria, off Pylos, in 425 BC, was highly unexpected. He wrote that "it was the common perception at the time that Spartans would never lay down their weapons for any reason, be it hunger, or danger."

The Great Rhetra was used in two senses by the classical authors. In one sense, it was the Spartan Constitution, believed to have been formulated and established by the legendary lawgiver, Lycurgus. In the legend Lycurgus forbade any written constitution. It was therefore presumed to have been oral.

The History of Sparta describes the destiny of the ancient Dorian Greek state known as Sparta from its beginning in the legendary period to its incorporation into the Achaean League under the late Roman Republic, as Allied State, in 146 BC, a period of roughly 1000 years. Since the Dorians were not the first to settle the valley of the Eurotas River in the Peloponnesus of Greece, the preceding Mycenaean and Stone Age periods are described as well. Sparta went on to become a district of modern Greece. Brief mention is made of events in the post-classical periods.

The Spartan Constitution, or Politeia, refers to the government and laws of the Dorian city-state of Sparta from the time of Lycurgus, the legendary law-giver, to the incorporation of Sparta into the Roman Republic: approximately the 9th century BC to the 2nd century BC. Every city-state of Greece had a politeia at all times of its sovereign life, including the preceding Achaean Sparta and the subsequent Roman Sparta. The politeia of Dorian Sparta, however, was noted by many classical authors for its unique features, which supported a rigidly layered social system and a strong military.

Spartan women were famous in ancient Greece for having more freedom than women elsewhere in the Greek world. To contemporaries outside of Sparta, Spartan women had a reputation for promiscuity and controlling their husbands. Unlike their Athenian counterparts, Spartan women could legally own and inherit property and they were usually better educated. The extant written sources are limited and largely from a non-Spartan viewpoint. Anton Powell writes that to say that the written sources are "'not without problems'... as an understatement would be hard to beat".

Polydorus (Polydoros) was the 10th Agiad dynasty king of Sparta. He succeeded his father Alcmenes and was succeeded by his son king Eurycrates.