Gerard Paul DiNardo (born November 10, 1952) is a former American football player and coach. He played college football as a guard for the Notre Dame Fighting Irish where he was selected as an All-American in 1974. DiNardo served as the head football coach at Vanderbilt University (1991–1994), Louisiana State University (1995–1999), and Indiana University (2002–2004), compiling a career college football record of 59–76–1. In 2001, he was the head coach of the Birmingham Thunderbolts of the XFL.

DiNardo went to college at the University of Notre Dame, where he played guard from 1972 to 1974 for coach Ara Parseghian. DiNardo was a member of the school's 1973 national championship team, and an All-American in 1974. [1] Incidentally, DiNardo honed his blocking skills against Rudy Ruettiger, a member of the scout team during DiNardo's time at Notre Dame. The football movie Rudy was based on Ruettiger's life. DiNardo's older brother, Larry, was also an All-American at Notre Dame, playing from 1968 to 1970.

DiNardo began his coaching career at the University of Maine in 1975. From 1977 to 1981, he was an assistant at Eastern Michigan University. In 1982, he joined the coaching staff at the University of Colorado under head coach Bill McCartney. DiNardo was the offensive coordinator when Colorado won the national championship in 1990. [2] The Buffaloes' offensive line coach from 1982 through 1986 was Les Miles, who was LSU's head coach from 2005 to 2016.

On December 12, 1994, DiNardo left Vanderbilt and took the head coach position at LSU. [4] He took over a program that had six straight losing seasons and that had not been ranked in the AP Poll since 1989.

DiNardo promised "to bring back the magic", and for his first three seasons, he had considerable success, including a victory in the 1996 Peach Bowl. [5] As the team's fortunes improved, [6] DiNardo brought back the tradition of wearing white jerseys during home games. [7]

On November 15, 1999, two days after the Tigers lost to unranked Houston at home, LSU chancellor Mark Emmert fired DiNardo with one game remaining in the season. DiNardo was given the option to coach the final game of the season against Arkansas, but DiNardo declined. [16] Instead, offensive line coach Hal Hunter was named interim coach, leading LSU to a 35–10 victory over the Razorbacks.

The 1999 season was the most recent season in which LSU did not participate in a bowl game. It has recorded 20 consecutive winning seasons since under Nick Saban, Les Miles and Ed Orgeron.

Saban, then in his fifth season at Michigan State, was named as DiNardo's replacement on November 30. Saban guided the Tigers to a Southeastern Conference title in 2001 and the BCS national championship in 2003 before leaving LSU for the National Football League's Miami Dolphins in January 2005.

DiNardo's next head coaching job was in the ill-fated XFL in 2001. [17] He was the coach of the Birmingham Thunderbolts, which posted the league's worst record at 2-8. The league folded after one season.

After the XFL folded, DiNardo moved on to become head coach of the Indiana Hoosiers in 2002. He was largely unsuccessful in the Big Ten Conference, never winning more than three games in a season, and was fired after the 2004 season. [18]

Starting in 2005, DiNardo worked as a college football analyst for ESPN and could be heard weekly as part of College GameDay. He currently works as a studio analyst for the Big Ten Network and college football expert for WSCR's Boers and Bernstein radio show in Chicago.

DiNardo was born in Howard Beach, Queens. He is the youngest son of Pasquale Richard DiNardo and Maria Inez DiNardo, and has three brothers, John, Robert, and Lawrence. He currently lives in Chicago, Illinois with his wife, Terri. He has two children, Kate and Michael.

The Birmingham Thunderbolts were a short-lived springtime American football team based in Birmingham, Alabama. This team was part of the failed XFL begun by Vince McMahon of World Wrestling Entertainment and by NBC, a major television network in the United States.

Leslie Edwin Miles is an American football coach. He most recently served as the head coach at Kansas. His head coaching career began with the Oklahoma State Cowboys, where he coached from 2001 to 2004. Following that, he coached LSU from 2005 to 2016. Miles is nicknamed "The Hat" for his signature white cap, as well as "The Mad Hatter" for his eccentricities and play-calling habits. Prior to being a head coach, he was an assistant coach at Oklahoma State as well as at the University of Michigan, the University of Colorado at Boulder, and with the Dallas Cowboys of the National Football League (NFL). Miles led the 2007 LSU Tigers football team to a win in the BCS National Championship Game, defeating Ohio State. 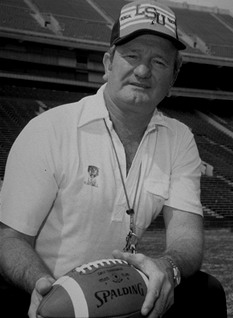 Charles Youmans McClendon, also known as "Cholly Mac", was an American football player and coach. He served at the head coach at Louisiana State University from 1962 to 1979. McClendon was inducted into the College Football Hall of Fame in 1986.

The Auburn–LSU football rivalry, also known as the Tiger Bowl, is an American college football rivalry between the Auburn Tigers and the LSU Tigers. Both universities have been members of the Southeastern Conference (SEC) since December 1932, but the rivalry dates back to 1901. Auburn and LSU have played every year since the SEC instituted divisional play in 1992.

The 2005 Capital One Bowl was a post-season college football bowl game between the Iowa Hawkeyes and the LSU Tigers on January 1, 2005, at the Citrus Bowl in Orlando, Florida. Spread bettors favored LSU by seven points, but Iowa won, 30–25, when quarterback Drew Tate completed a 56-yard pass to wide receiver Warren Holloway for a touchdown as time expired. The game was part of the 2004 college football season and was the concluding game of the season for both teams.

Stephen Robert Addazio is an American football coach and former player. He is the head football coach at Colorado State University. Addazio served as the head football coach at Temple University from 2011 to 2012 and Boston College from 2013 to 2019. Prior to his stint at Temple, Addazio spent six seasons as an offensive line coach, assistant head coach, and offensive coordinator of the Florida Gators football team and was a part of two BCS National Championship Game-winning coaching staffs under head coach Urban Meyer.

The 1999 LSU Tigers football team represented Louisiana State University in the 1999 NCAA Division I-A football season. Coached by Gerry DiNardo in his last year at LSU, the Tigers played their home games at Tiger Stadium in Baton Rouge, Louisiana. LSU fired DiNardo before the final game of the season against conference opponent Arkansas after eight consecutive losses and named Assistant Coach Hal Hunter as interim head coach for the final game. DiNardo was given the opportunity to coach the game vs. Arkansas, but refused.

Alabama Crimson Tide football under Nick Saban covers the history of the Alabama Crimson Tide football program since Nick Saban was hired as head coach in 2007. Alabama plays as part of the National Collegiate Athletic Association (NCAA) Football Bowl Subdivision (FBS) and is a member of the West Division of the Southeastern Conference (SEC). The Tide plays its home games at Bryant–Denny Stadium in Tuscaloosa, Alabama. Their overall official record under Saban is 165-23 (.878), 19 bowl game appearances with 14 victories, 8 SEC West titles, 7 SEC championships, and 6 national championships. Since 2008, Saban's teams have spent all or part of each season ranked No. 1 in national polls.

The 1997 Independence Bowl was a college football postseason bowl rematch between the LSU Tigers and the Notre Dame Fighting Irish.

The 2018 NCAA Division I FBS football season was the highest level college football competition in the United States organized by the National Collegiate Athletic Association (NCAA) in 2018.