Mureșan was born in Tritenii de Jos, [1] [ citation needed ] Cluj County, Romania. Although his parents were of normal height, he grew to his remarkable height due to a pituitary gland disorder. [2]

He played competitive basketball at Universitatea Cluj, becoming national champion in 1992. [3] [4] He played professionally in the French league with Pau-Orthez during the 1992–93 season and was an instant hit with fans, also managing to win the French League Cup. [3] He was selected by the NBA franchise Washington Bullets in the 1993 NBA draft. [5] He played in the NBA from 1993 to 2000 showing signs of a promising career that was derailed by injuries. His best season came in the 1995–1996 campaign, when he averaged 14.5 points per game.

Mureșan was named the NBA's Most Improved Player for the 1995–96 season after averaging 14.5 points, 9.6 rebounds, 2.26 blocks per game while making a league-leading 58.4 percent of his field goals. He led in field goal percentage again the following season, with a 60.4% average. Overall, he holds career averages of 9.8 points, 6.4 rebounds, 0.5 assists, 1.48 blocks per game and a .573 field goal percentage. He joined the New Jersey Nets for the final 31 games of his career. After ending his NBA career, Mureșan had another stint at Pau-Orthez where he won the French league before returning to the United States with his family. [3] He normally wore number 77, in reference to his height.

On March 11, 2007, Mureșan played a game for the Maryland Nighthawks as part of the tallest lineup in the history of basketball. [6] This was the only basketball game Mureșan ever played where he was not the tallest person on the court, as Sun Mingming is 7 ft 9 in (2.36 m).

In 2004, Gheorghe Mureşan founded the Giant Basketball Academy (GBA), a program dedicated to teaching the proper fundamentals of basketball to boys and girls of all ages. [7] [2] The Academy is located in Ashburn, Virginia. [8]

Mureşan is also part of the Washington Wizards marketing and public relations team, [2] serving as an "ambassador" for the team. [9]

Outside basketball, Mureșan has dabbled in acting, playing the title character in 1998 feature film My Giant starring comedian Billy Crystal. [10] He appeared as a ventriloquist in the music video for Eminem's breakthrough single "My Name Is." He has appeared in commercials for Snickers candy bars, and sports television network ESPN. Most recently, Mureșan co-authored two young adult fitness and health books: The Boy's Fitness Guide and The Girl's Fitness Guide. [11]

In 2006, Mureșan appeared at #28 on the Romanian Television's list of 100 Greatest Romanians of all-time, as the third-highest-ranked athlete/sportsman on the list. (gymnast Nadia Comăneci and footballer Gheorghe Hagi were placed ninth and 13th, respectively).

In 2013, Mureșan participated in the first annual 3v3 UMTTR (You Matter) Basketball Tournament to increase awareness, prevention and research of teen suicide, the leading cause of death among adults and children between the ages of 15 and 24.

Mureșan and his wife Liliana and sons George and Victor have resided in Franklin Lakes, New Jersey, [12] but they relocated to suburban Washington, D.C. [13] Since the 2016–2017 season, his oldest son, George, has played for the Georgetown University Hoyas as a walk-on forward.

Shawn Paul Bradley is a German-American former basketball player who played center for the Philadelphia 76ers, New Jersey Nets, and Dallas Mavericks of the National Basketball Association (NBA). At 7 ft 6.36 in (2.30 m) tall, Bradley was one of the tallest players in NBA history. Bradley was born in Landstuhl, West Germany as his family was stationed at the U.S. Military base medical facility, and grew up in Castle Dale, Utah. He also holds German citizenship. Bradley was featured in the ESPN 30 for 30 short documentary "Posterized" given his propensity "for being on the wrong end of a lot of great dunks." 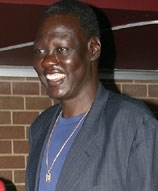 Manute Bol was a Sudanese-born American basketball player and political activist. Listed at 7 ft 7 in (2.31 m) tall, Bol was the tallest player in the history of the National Basketball Association.

Ian Mahinmi is a French professional basketball player for the Washington Wizards of the National Basketball Association (NBA). At 6'11" and 250 lb, he plays the center position. He was selected with the 28th overall pick in the 2005 NBA draft by the San Antonio Spurs. 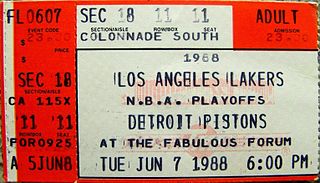 The 1987–88 NBA season was the 42nd season of the National Basketball Association. The season ended with the Los Angeles Lakers winning their second straight Championship, beating the Detroit Pistons in seven hard-fought games in the NBA Finals, becoming the NBA's first repeat champions since the Boston Celtics did it in the 1968–69 NBA season.

Élan Béarnais Pau-Lacq-Orthez, also known as simply Élan Béarnais, and formerly known as Élan Béarnais Pau-Orthez, is a French professional basketball club that is based in Pau. They compete in the top-tier French league, the LNB Pro A. They are one of the most successful clubs in French basketball history, as they have won nine French League championships and have had European-wide successes as well.

James Michael McIlvaine is a retired American professional basketball player who spent seven seasons in the National Basketball Association with the Washington Bullets, Seattle SuperSonics, and New Jersey Nets. The 7-foot-1 shot-blocking specialist is perhaps best remembered for the fall-out that occurred after he signed with the Seattle SuperSonics in 1996.

Ioan Ovidiu Sabău is a Romanian former footballer, who played as a midfielder.

CS Universitatea Cluj-Napoca is a Romanian professional basketball club based in Cluj-Napoca, Romania. The club, for sponsorship reason under the name U-Banca Transilvania Cluj-Napoca, competes in the Liga Națională. As other sports teams that were initially part of the parent sports club, U Cluj, for historical reasons, the club keeps the name U in its name.

Brian Keith Davis is an American former college and professional basketball player. A 6'7" guard-forward, Davis played both football and basketball at Bladensburg High School. He then played four years of basketball at Duke University, appearing in 141 career games, and was a member of the back-to-back national championship teams of 1991 and 1992.

The Liga Națională is the top-tier professional basketball league of Romania. Founded in 1950, the winner of the league is crowned the Romanian national champion. Currently, the league exists of 24 teams playing in three different divisions. The most successful club in the league's history is Dinamo Bucureşti, which has won a record 22 titles. Teams from the Liga Națională also participate in European competitions, as they can qualify for the Basketball Champions League and FIBA Europe Cup through their season results.

Gheorghe Gruia Marinescu was a Romanian handball player, coach and sports official. Born in Bucharest, Gruia won the gold medal in the 1964 World Handball Championship and the 1970 World Championship. In the 1972 Summer Olympics he won the bronze medal with the Romanian team and become the top scorer of the competition with 37 goals. He played as a right back and spent his entire professional career with Steaua Bucharest.

Gheorghe "Ghiţă" Licu was a Romanian handball pivot player. Between 1966 and 1976 he capped 197 times for the national team and scored 328 goals, winning world titles in 1970 and 1974 and Olympic medals in 1972 and 1976. Domestically he played his entire career from 1964 to 1980 for Dinamo Bucuresti, winning the national titles in 1965, 1966 and 1978 and the Romanian Cup in 1979. After retiring from competitions Licu became a handball coach. In 1980–1993 he worked with Dinamo Bucuresti in Romania, and in 1995–2006 with SC Madgeburg in Germany, first with the junior and then with the senior team, leading them to the German national title in 2001 and the EHF Champions League victory in 2002. His son Robert also became an Olympic handball player and coach.

The 1995–96 NBA season was the Bullets' 35th season in the National Basketball Association. During the offseason, the Bullets acquired All-Star guard Mark Price from the Cleveland Cavaliers, Robert Pack from the Denver Nuggets, and signed free agents Tim Legler and Chris Whitney. In his second season, Juwan Howard emerged as a star on the court and in the community, averaging 22.1 points per game while being selected to the 1996 NBA All-Star Game. However, Injuries would be an issue as Chris Webber was limited to 15 games following the lingering effect to his injured shoulder. Meanwhile, Price only appeared in just seven games due to a sore left heel, and Pack who played in 31 games was out with nerve damage in his right leg.

The 1997–98 NBA season was the Wizards' 37th season in the National Basketball Association. There was a new beginning for basketball in Washington, D.C. as the team changed its name to the "Wizards", fearing "Bullets" endorsed gun violence. The team also got a new logo, and new uniforms with blue, black and brown colors. The Wizards got off to a slow 5–11 start to the season, losing their first five home games at US Airways Arena. In December, they moved into their new arena, the MCI Center, posting a 24–12 home record for the remainder of the season. The Wizards won their final four games of the season to finish fourth in the Atlantic Division with a 42–40 record, falling just one game short of making the playoffs. Rod Strickland led the league with 10.5 assists per game and made the All-NBA Second Team. Following the season, Chris Webber was traded to the Sacramento Kings, and Gheorghe Mureșan, who missed the entire season with a foot injury was released.

Patrick Mihai Petre is a Romanian professional footballer who plays as a winger for Liga III club Dacia Unirea Brăila.

Elhadji Tacko Sereigne Diop Fall is a Senegalese professional basketball player for the Boston Celtics of the National Basketball Association (NBA), on a two-way contract with the Maine Red Claws of the NBA G League.