One of the country’s most popular film actors during the 70s and the 80s, he has worked in over 400 movies in Urdu and Punjabi during a career spanning nearly 50 years. [3]

He is popularly known as Gullo Bhai in the Pakistan film Industry. [1]

He first worked in film Dil Walay in 1974 and then he worked in film Mera Naam Hai Mohabbat , released in 1975, was a blockbuster in Pakistan and China. The film was inspired by a Chinese folk story. His co-star was Babra Sharif, her first as a heroine. [1]

Since then, he has received several Nigar Awards, Lux Style Awards and a Pride of Performance Award by the President of Pakistan in 2020. [1]

Nirala, real name Syed Muzaffar Husain Zaidi was a Pakistani comedian and film actor. He only appeared in Urdu films made in Pakistan. His first film was Aur bhi gham hain (1960). His last film was Choroan Ka Badshah, which was released in 1988. His most successful film was Armaan in 1966, in which he played a supporting role with Waheed Murad.

Jharna Basak, known by her stage name Shabnam, is a Bangladeshi–Pakistani stage and film actress. Actor Waheed Murad introduced her to the Pakistani film industry by offering her a lead role in his film Samundar in 1968. Shabnam remained active in Lollywood in the 1960s, 1970s, and 1980s. She has been nominated for Nigar awards several times, winning it 13 times. She has appeared in over 149 films. She was a leading actress in the Pakistani film industry for 28 years. 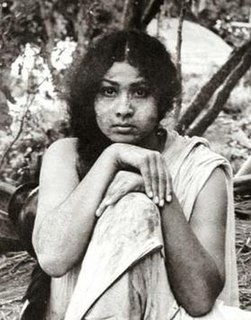 Rosy Afsary was an actress in the Bangladeshi film industry. She was awarded the Bangladesh National Film Award for Best Supporting Actress in its first ceremony in 1975 for her role in the film Lathial.

Rani was a Pakistani film and television actress. She gained success in the late 1960s when she made a hit pair with famous actor and producer Waheed Murad. She was also referred as The Dancing Queen for her portrayal of romantic and dancing roles in films. She remained one of the most successful actresses of the subcontinent and was also popular for her dance performances in films. Rani died of cancer on 27 May 1993.

Waheed Murad was a Pakistani film actor, producer and script writer, famous for his charming expressions, attractive personality, tender voice and unusual talent for acting. Waheed is considered as one of the most famous and influential actors of South Asia. He is often referred to as "Chocolaty Hero" or "Chocolate Hero". Born in Karachi, Sindh, Pakistan, did graduation from S.M. Arts College Karachi, and then masters in English literature from University of Karachi. He started his film career as cameo in 1959 in the film Saathi when he was 21 years old. His naughty facial gestures, bold romanticism and alluring performance style during picturisation of songs made him immensely popular.

Deeba, is a Pakistani film actress. She was one of the leading film actresses during the 1960s and 1970s, well known for her romantic and tragic roles in Urdu and Punjabi films. She has received a Nigar Award and Pride of Performance. She is referred as the "Pakistani Mona Lisa".

Yousuf Khan (Urdu: یوسف خان; was one of the Pakistan's most respected actors. He appeared in more than four hundred films in Urdu, Punjabi and Pashto languages over his 46 year long career. 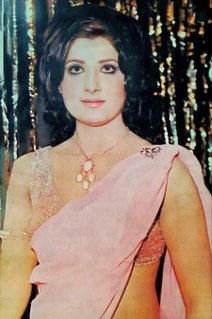 Bahar Begum is an actress best known for many Pakistani movies since 1956. She was first introduced to the Pakistani film industry by the renowned film director Anwar Kamal Pasha in film Chann Mahi (1956). Anwar Kamal Pasha is the one that gave her the professional film world name Bahar Begum. She later acted both in Punjabi, Pashto and Urdu language Pakistani films and had a very active career from 1956 through the 1980s. She has more than 600 films to her credit. 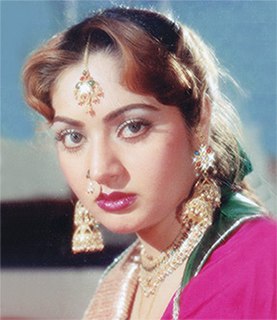 Nadira was a Pakistani film actress and dancer. She entered the film industry in 1986 and made her debut with the Punjabi film Akhri Jang. She was referred to as The White Rose for her portrayal of romantic roles in films. She mainly worked in Punjabi and Urdu films.

Saiqa Akhtar, also known as Saiqa (Urdu:سائقہ) is a Pakistani actress. She acted in both Urdu and Punjabi films and is known for her roles in films Baharo Phool Barsao, Mela, Ranga Daku, Jahan Tum Wahan Hum, Ghulami, Angara and Chambaili.

Aliya, also known as Aaliya is a Pakistani film actress. She acted in both Urdu and Punjabi films and is known for her roles in films Andaleeb, Anhoni, Maula Jatt, Yeh Adam, Lado Rani and Neend Hamari Khwab Tumhare.

Sofia Bano is a Pakistani former film actress and singer who starred in Lollywood movies mostly in supportive roles during the 1960s and 1970s. Her notable films include Ehsaas (1972), Gharana (1973), and Parday Mein Rehnay Do (1973). She won the Nigar Award for best supporting actress in 1973.

Bindiya is a Pakistani actress and singer. She is known for her roles in dramas Noor Bano, Nadamat, Samundar, Thakan and Meri Behan Maya and she also acted in Urdu and Punjabi films Begum Jan, Awaz, Pakeeza, Behan Bhai, Ak Din Bahu Ka and Joora. 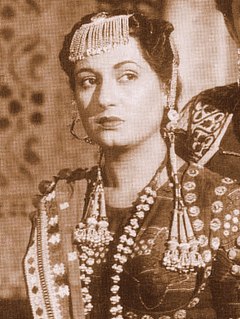