Ghulam Rasool Santosh (1929 – March 10, 1997), also known as G. R. Santosh, was a prominent Kashmiri painter and poet. He was best known for his themes inspired by Kashmir Shaivism. In 1979, he became the recipient of Sahitya Akademi Award for his poem titled Be Soakh Rooh. [1]

He was born Ghulam Rasool in a Kashmiri Muslim family of modest means in the Chinkral Mohalla habba kadal neighborhood of old Srinagar. He dropped out of school after his father's death and took up odd jobs like writing, painting signboards, weaving silk and whitewashing walls. In 1954 he won a scholarship to study fine arts under a celebrated Indian painter, N. S. Bendre in the city of Baroda, in the state of Gujarat, in western India.

Around the same time he did what was considered unusual and unacceptable in conservative Kashmiri society - he married his childhood sweetheart, Santosh, who was a Kashmiri Pandit, and also assumed her name. [2]

In the early 1960s, Santosh studied Tantric (mystical) art and Kashmir Shaivism. In 1964 he adopted this style to create some of the best examples of modern Tantric paintings. His paintings are known for the vibrancy of colors, neat lines, spiritual energy and sensuousness. His paintings have been exhibited in notable international shows including the Tenth São Paulo Art Biennial, 1969 [3] and the 'Neo-Tantra: Contemporary Indian Art Inspired by Tradition' exhibition at University of California, Los Angeles, 1985. [4]

Santosh also wrote plays, poetry and essays in Kashmiri. He was also an authority on Kashmiri Shaivism, and was one of the very few people who could read and write the ancient, and almost-extinct, Kashmiri script called Sharda. 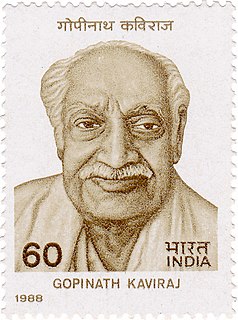 Gopinath Kaviraj was an Indian Sanskrit scholar, Indologist and philosopher. First appointed in 1914 a librarian, he was the Principal of Government Sanskrit College, Varanasi from 1923 to 1937. He was also the editor of the Sarasvati Bhavana Granthamala during that period.

Peerzada Ghulam Ahmad, known by his pen name as Mahjoor, was a poet of the Kashmir Valley, along with contemporaries, Zinda Kaul, Abdul Ahad Azad, and Dinanath Nadim. He is especially noted for introducing a new style into Kashmiri poetry and for expanding Kashmiri poetry into previously unexplored thematic realms. In addition to his poems in Kashmiri, Mahjoor is also noted for his poetic compositions in Persian and Urdu.

Amin Kamil (1924–2014) was a major voice in Kashmiri poetry and one of the chief exponents of modern ghazal in the language. His influence is widely accepted by his contemporaries and later generations. Kamil, besides being a poet, has also written short stories and a novel and works of literary criticism. He has also written a number of plays and musicals for the radio. His critically edited collection of Sufi poetry remains a definitive text which has been widely acclaimed. He has also edited the collected verse of Nund Reshi, and that of Habba Khatun. Kamil is also known as a scholar of high calibre.

Mohammad Yousuf Taing, also known as M. Y. Taing, is a researcher, scholar, critic, writer, politician and historian. He is also biographer of Sheikh Abdullah. He is a prolific literary thinker writing in three Indian languages.

Doru Shahabad is a town and notified area committee in the Anantnag district of the Indian union territory of Jammu and Kashmir. It also known as a historical township in South Kashmir's Anantnag district. Doru Shahabad is considered place of intelligence, where great scholars like Mehmood shah Gami, Rasul Mir Shahabadi were born. These scholars contributed to the literature and culture of Kashmir. In present times, Shahabad has produced chief ministers such as Syed Mir Qasim, other politicians, bureaucrats, and leading agricultural scientists.

Professor Ghulam Nabi Firaq was a Kashmiri poet, writer and an educationist. From the last fifty years he had been writing poetry and prose. In doing so he used, besides traditional ones, several poetic forms including blank verse, free verse, sonnets, quatrains, metric poems and lyrics. He also translated dozens of English poems of outstanding English poets into Kashmiri. As a result of all this, he enriched the expression of the language and made it more suitable for communicating his sensibility which in nature is modern. Besides, he had been writing essays and articles in Kashmiri language, which was his mother tongue, and which he had made the vehicle of expression from early fifties. As a literary critic and historian he had been trying to evaluate the Kashmiri poetry of the last five hundred years and rehabilitate it by bringing to prominence among other things its intrinsic merit and power of expression. He also holds the Sahitya Akademi Award for his works in Kashmiri literature. He is regarded as one of the very few people of Kashmir who has been trying to preserve the rich Kashmiri culture, heritage and language.

Ghulam Rasul, also written Ghulam Rasool, is a male Muslim given name. It may refer to

Ghulam Nabi Gowhar was a multilingual Indian Kashmiri author, novelist, poet, columnist and a retired sessions jurist. He wrote about sixty books in Kashmiri, Urdu, and in English languages on various subjects such as politics, literature, history and on Sufism. In 1971, he wrote a novel titled Mujrim, leading him to become the "first novelist of Kashmiri literature". The recipient of cultural and literary awards and accordion, including Sahitya Akademi Award, he is also credited for translating constitution of India into Kashmiri language. 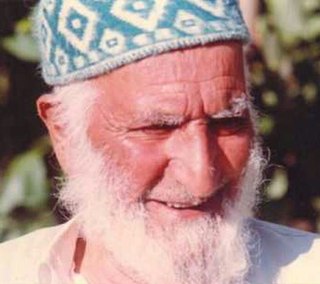 Mir Ghulam Rasool Nazki, also spelled Meer Ghulam Rasul Naazki, was a Kashmiri poet, writer, broadcaster, and teacher. He wrote books, including poetry in regional and foreign languages such as Urdu, Persian, Arabic and later work in Kashmiri language. The receipent of Sahitya Akademi Award for Awaz-e-dost, a Kashmiri poetry, he is also credited as the "first Kashmiri writer" to write in Ruplic of India after independence, and the first poet to resuscitate quatrain poetic form in Kashmiri literature, which originally began during the period of thirteen and fourteenth century poets such as Lal Ded and Nund Reshi.

Prof. Ghulam Mohiuddin Hajni was a Kashmiri writer, critic, political activist and teacher. He wrote in regional and foreign languages such as Urdu, Persian, Arabic and primarily in Kashmiri language. He is believed to have significantly contributed to Kashmir language, culture, art and literature besides actively writing against Dogra rule in the region. In 1970, he became the recipient of Sahitya Akademi Award for his research publication titled Maqalati Hajini.

Ghulam Ahmad Fazil Kashmiri, commonly known as Fazil Kashmiri, was a Kashmiri poet and lyricist. He was involved in Arabic, English, Persian, Urdu and particularly in Kashmiri literature. His uncertain work includes thirty six books published in various genres such as ghazal, nazm, rubaʿi, qata, marsiya, munajat, naʽat, manqabat and leela among others.

Sajood Sailani was a Kashmiri playwright, painter, theater artist, cartoonist and a poet. He is primarily recognized for his radio plays written in regional languages. He produced his work in Urdu and Kashmiri languages and wrote about 150 radio plays, 27 stage dramas and 40 comedies throughout his career. In the latter years of his career, he wrote a play titled Kaej Raath, leading him to become the recipient of Sahitya Akademi Award under Kashmiri category in 1994. He also served as a member of Sahitya Akademi's advisory board from 1973 to 1977 and in 1990.

Ghulam Nabi Khayal is a poet and essayist from kashmir. He has authored 30 books in Kashmiri, Urdu and English.